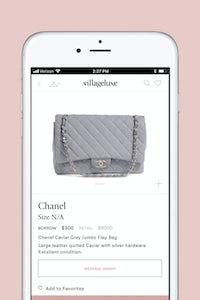 According to chief marketing officer Shanin Molinaro, the company will invest in technology to “enhance features that will allow for a more seamless approach to renting,” such as AI-powered fit technology and search capabilities for items from nearby closets to encourage “hyper-local” sharing, which helps to minimise carbon footprints.

Helping to foster connections within the platform’s invite-only community, or “sisterhood,” is another key feature and Molinaro is focused on. “We already see really intimate conversations [between renters and lenders] taking place. They’ve become friends and they get to know one another,” she said. Expansion is also on the cards, first across US cities — including Los Angeles, San Francisco, Miami and parts of Texas — before rolling out internationally.

Certainly, Villageluxe is tapping a growing opportunity. The global online clothing rental market was valued at $1 billion in 2017 and is expected to reach $1.9 billion by 2023, according to a report by Allied Market Research. North America, the market leader, accounted for 40 percent of global market share in 2017.

Molinaro declined to give figures for the business or number of site users, but noted that about 22,000 women are on the waitlist to join the platform.

Will the ‘Sharing Economy’ Work For Fashion?

Soon You May Be Renting Your Work Clothes