Online retailers like Moda Operandi and MatchesFashion are dipping their toes into the $649 billion homeware space, betting the same customers splurging on dresses and shoes will also buy candles and chairs.

Online retailers like Moda Operandi and MatchesFashion are dipping their toes into the $649 billion homeware space, betting the same customers splurging on dresses and shoes will also buy candles and chairs.

LONDON, United Kingdom — MatchesFashion.com’s July campaign was flush with Pendleton-style prints, eye-catching colours and textured fabrics. But models weren’t dressed in the season’s must-have runway items. Instead, they were modelling blankets, plates and cushions from the retailer’s debut homeware offering.

Luxury homewares are having a moment. Brands like Gucci and Loewe are branching out from handbags and dresses into chairs and ceramics. The list extends from in-house lines at La DoubleJ and Loewe to a Virgil Abloh-designed collection at Ikea, and an upcoming Shrimps collaboration at Habitat. Luxury e-commerce sites like Moda Operandi are adding permanent home decor sections after successful one-off collaborations.

For luxury in particular, a move into the $649 billion homewares and home furnishings market makes sense. In selling luxury, high-end retailers are pitching a lifestyle that goes beyond clothes, bags and shoes. Adding homewares to the mix helps communicate this to consumers. And unlike industries like apparel and beauty, homeware and furnishings has largely been dominated by specialists, leaving ample room for new players to enter. After all, if a hot brand like Gucci — whose bags and shoes fly off the shelves — segues into home accessories, shoppers are going to want in.

“It is Gucci — I can’t think of a better brand to get customers excited about pillows and candles and chairs at a very high price point,” said Michael Kliger, president of MyTheresa, the Neiman Marcus-owned online retailer that began stocking the luxury house’s home collection in June.

In a way, the homewares and furnishing space represents untapped potential.

In retail, fast-fashion and discount players have been most aggressive about expanding into homewares. Inditex launched Zara Home in 2003, while H&M Home launched in 2009, and is now stocked at 335 stores. Earlier this year, Walmart introduced virtual homeware showrooms online, taking aim at retailers like Target and Amazon, which have both been investing heavily in private label homeware.

In the luxury space, Fendi, Ralph Lauren and Giorgio Armani have long sold homewares; Gucci and Loewe, however, only launched their collections in 2017. 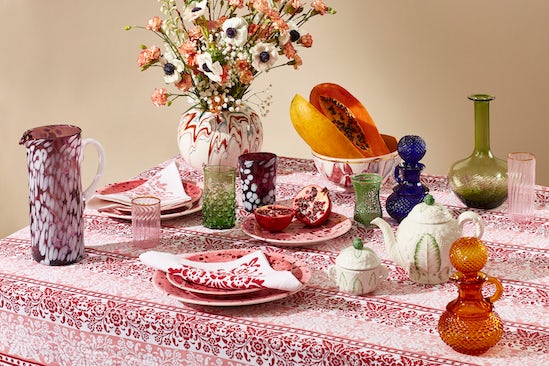 “Due to product diversity, homewares and home furnishings tends to be a relatively fragmented industry,” said Erika Sirimanne, head of home and garden research at the global market intelligence firm. “In a way, the homewares and furnishing space represents untapped potential.”

Despite the high price points of the pieces stocked by the likes of Moda Operandi and MatchesFashion — a large Gucci candle can set customers back £495 ($649), while cushions reach £985 ($1,292) — there is consumer appetite. Moda Operandi’s first move into homewares was a collaboration with Cabana Magazine editor-in-chief Martina Mondadori Sartogo. Due to high demand, the trunk show was extended three times.

At MatchesFashion, the company’s approach to interiors mirrors its approach to fashion, said chief executive Ulric Jerome. He said the same buying team that oversees clothing and accessories also looks after the new home section.

“We’re selling a the lifestyle for our customers,” he said.

Moda Operandi has been encouraging ready-to-wear and accessories designers to expand into tabletop pieces, partnering exclusively with names like Luisa Beccaria, Mercedes Salazar and Emilia Wickstead. Many fashion names sit among MatchesFashion’s assortment of homeware items too, from Calvin Klein to Peter Pilotto. Jerome pointed to Preen By Thornton Bregazzi and Luke Edward Hall as top performers over the past month — both of which are capsule collections exclusive to the site. 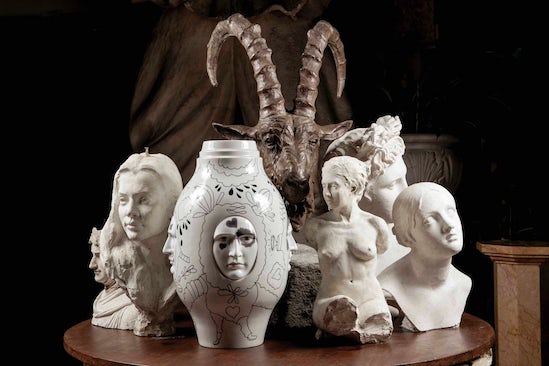 Having a unique offering is central to luring shoppers away from high end department stores or specialist furniture destinations. Luisa Via Roma, which launched its e-commerce homeware department in 2014, will often partner with designers on exclusive capsule collections, with past collaborators including Matteo Cibic and Marcantonio Raimondi Malerba. This is a key point of difference for the retailer, says Valentina Ottobri, homeware project manager.

“We carefully research niche brands and select the most exclusive pieces of collections of the most well-known names,” she said. “We also have close personal relationships with designers and artisans who make special edition pieces just for us and our clients.”

Selling homewares also poses unique challenges. For example, clothes are relatively easy and affordable to ship and unlikely to be damaged in transit, compared with a fragile, bulky item like a chair. Candles can be subject to cross-border shipping regulations.

MatchesFashion’s Jerome said prior to the home category launch, a lot of effort went into the finessing the logistics to ensure every product would be packaged and shipped securely — and in a signature marble box — without risk of damage.

Still, homewares remain a niche for many retailers.

Today, Luisa Via Roma’s homeware department only makes up about 1 to 2 percent of annual sales, while MyTheresa currently only offers furnishings by Gucci. Kliger said stocking the brand’s homeware line was a no brainer, but despite its stellar reception, the business currently has no plans to venture further into the space.

“If you’re choosing a wallpaper, that will be on the wall for some time, whereas your dress, if you don’t like it as much after three months, you won’t regret [the purchase] because you had a few occasions to wear it,” he said.

Is Fashion Missing the Homeware Opportunity?