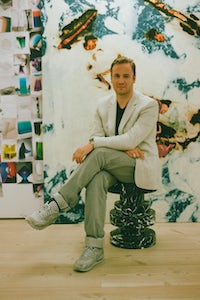 PARIS, France — Nicholas Kirkwood is taking back control of his brand from LVMH, ending a 7-year partnership between the luxury conglomerate and the British footwear label.

“This decision was mutual and amicable,” LVMH told BoF in a statement. The company said it would continue to support Kirkwood over the next few months to “ensure a smooth transition,” though it didn't disclose the financial terms of the transaction. The split is expected to complete by the end of the year.

Historically, LVMH has been known for its aggressive and expansionary dealmaking. Before now it had only ever sold two brands: Christian Lacroix in 2005, and Donna Karan International in 2016. But the news comes hot on the heels of a more major break at LVMH. On Wednesday, the French conglomerate called off its planned $16 billion takeover of Tiffany & Co. The deal, agreed last November, was set to be the biggest ever luxury acquisition.

Nicolas Kirkwood, on the other hand, only accounts for a sliver of sales within LVMH’s €22.2 billion fashion division, which is driven by mega brands Louis Vuitton and Dior. But the pandemic, which has left companies big and small struggling to stay afloat, is putting pressure on the company to streamline its portfolio. Within the group’s fashion and leather goods division, first-half profits fell 68 percent this year to €1.8 billion, missing analyst forecasts by over half a billion euros. Revenue was down 23 percent, hitting €10.4 billion.

“Complexity is a big issue for LVMH near-term,” said Pauline Brown, a lecturer and business writer who was formerly chairman of LVMH’s North America unit. “I think we’ll see more rationalising of the portfolio and the organisation in the months ahead.”

LVMH doesn't break out sales for individual brands, however, according to UK company filings, Nicholas Kirkwood has been suffering from widening losses. Turnover in 2019 was down 28 percent from the year previous at £8.14 million according to a report published to Companies’ House on August 7. That same year the company suffered an operating loss of £3.3 million an increase on losses of £2.46 million in 2018. (The brand is yet to report financials for the coronavirus period.)

“When times are tough, you may be tempted to clean up your act. Kirkwood was not going places as a brand and was likely generating (small) losses, even before the Covid-19 pandemic, hence, a good candidate for rationalisation,” said Bernstein analyst Luca Solca. “LVMH has a long tail of underperforming brands in the fashion and luxury goods division. The tail is now apparently one little bit shorter.”

The sale suggests the interest in smaller, founder-led brands is waning. Over the past few years, LVMH rival Kering has also been cleaning up its portfolio, unravelling partnerships with smaller brands it has struggled to scale including Christoper Kane and Stella McCartney.

Nicholas Kirkwood launched his namesake label in 2005 with co-founder Christopher Suarez, who was the brand’s CEO until he left the business in 2015. The fledgeling label garnered much buzz from press and buyers drawn to Kirkwood's signature sculptural high heels, and Kirkwood became the first accessories designer to win the British Fashion Council/Vogue Designer Fashion Fund award. Eventually, the label caught the attention of LVMH, which bought an undisclosed majority stake in the company in September 2013.

Today the brand’s shoes, which retail between £400 and £1,000, are stocked at global luxury retailers including Matchesfashion and Net-a-Porter, as well as top-tier department stores like Harrods, Galeries Lafayette and Saks Fifth Avenue.

Recently, the label has worked to reduce its reliance on wholesale retailers, attempting to boost its own direct-to-consumer sales by inking a partnership with luxury marketplace Farfetch and re-launching its own e-commerce website in September 2019. The brand also has a flagship retail store, located in London’s Mayfair neighbourhood.

Nevertheless, directors expect difficulty ahead as wholesalers slash budgets, according to filings with Companies House.