LVMH has struggled to build fashion brands from scratch before. Its latest attempt was complicated by high prices that weren’t a good match for Rihanna’s broad fan base. 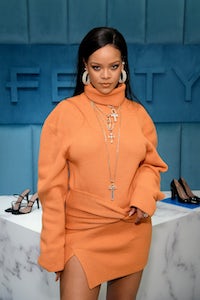 LVMH has struggled to build fashion brands from scratch before. Its latest attempt was complicated by high prices that weren’t a good match for Rihanna’s broad fan base.

Less than two years after Fenty started selling its shirt dresses and strappy high-heels, LVMH and Rihanna are pulling the plug.

The French fashion giant said Wednesday it would cease operations at the brand while continuing its relationship with the superstar through Fenty Beauty, as well as a new investment in her lingerie business via LVMH-backed private equity firm L Catterton.

The launch of the celebrity tie-up stoked headlines, not only for its superstar creative director but also because it was the first fashion brand LVMH had started from scratch since its chairman Bernard Arnault backed designer Christian Lacroix in 1987. The French fashion conglomerate’s bet helped to spotlight innovation at the company, while banking on Rihanna’s power as a style icon and spokesperson to help rapidly build market share for the new luxury house.

Emboldened by the runaway success of its partnership with Rihanna on her Fenty makeup line (which brought in around half a million dollars in sales in its first year), LVMH had positioned Fenty as a long-term initiative when the label launched to much fanfare in spring 2019.

But the brand struggled to gain traction. The difficult trading environment created by the pandemic less than a year after launch certainly bears some of the blame, but the brand’s brief lifespan also points to a long-standing challenge for the Paris-based luxury group: when it comes to launching new businesses versus acquiring established names, LVMH still struggles.

The move to discontinue Fenty is the latest instance of LVMH pulling the plug on underperformers as the pandemic continues to hammer luxury sales. The group announced it would unwind its partnership with the British shoe designer Nicholas Kirkwood last fall, and is reportedly seeking bidders for shirtmaker Thomas Pink, which suspended e-commerce in December and closed its remaining stores in London and New York.

Fenty’s launch coincided with a broader push to boost LVMH’s reputation for innovation. The group started a luxury e-commerce emporium, 24S, which has yet to take significant share from the likes of Farfetch and Net-a-Porter, as well as sponsoring a start-up accelerator aimed at fast-tracking early-stage fashion tech companies.

With its star-power and halo of innovation, Fenty might have been different. At launch, the brand adopted the buzzy strategies of the fashion moment. It focused on direct-to-consumer online sales and frequent “drops” of limited-edition products took the place of seasonal collections, trying to build on that format without the foundation of glitzy stores or an established brand image built up over decades.

As one of social media’s most influential style voices — with a tossed-together aesthetic that made avant-garde dressing look almost easy, and the rarefied allure of a bona fide, Grammy-winning pop princess — Rihanna’s “Navy” of 91 million Instagram followers were the key audience.

But their impassioned embrace of her $35 matte foundation didn’t extend to $600 button-up shirts and $950 jean jackets.

Even before Fenty’s 2019 launch, Rihanna had expressed concern that the label’s high prices could alienate her sprawling fanbase, sources close to the project said. LVMH agreed to price items at a lower markup than for its luxury ready-to-wear brands like Givenchy, but they remained a stretch for the vast majority of her audience.

At the same time, the concern over pricing caused the brand to favour simple construction and materials, resulting in items that were cheaper than Dior, but hardly as desirable.

While demand for some items, like $200 geometric sunglasses or strappy stilettos by shoe designer Amina Muaddi, had been encouraging, the response was far more muted than the singer’s other ventures.

Meanwhile, the cohort of luxury shoppers who had emulated Rihanna’s trademark style — mixing Dior and Saint Laurent with Off-White, Y/Project and Jacquemus — kept on buying from those brands. Wanting to wear the same things as Rihanna and buying them from Rihanna, it turned out, were just not the same thing.

After the project struggled to take off, the brand switched up its design team and brought on a new managing director, Bastien Renard, who joined last year.

But the push to reposition Fenty stalled, as the pandemic pounded fashion sales and threw up logistical challenges for Rihanna and her team. With travelling for in-person meetings increasingly difficult, and the star’s more successful makeup and lingerie businesses based in the US, finding a way forward for Paris-based Fenty fashion made less and less sense.

LVMH too, found that it made more sense to focus its investment on Rihanna’s powers to shift the US mass-market: LVMH-backed private equity firm L Catterton led a $115 million investment round in Rihanna’s lingerie brand, Savage X Fenty, the brand said Wednesday.

Rihanna had teamed up with Goldman Sachs to seek investment in growing the fast-fashion lingerie line, whose body-positive, live-streamed runway shows have received accolades and powered sales. Offering LVMH some exposure to the action at Savage X Fenty allows the luxury group to redirect its investment in Rihanna — as well as having the potential to prevent possible standoffs between duelling fashion ventures should Savage expand into new categories.

While the move to cease operations at Fenty after less than two years was unusually fast — LVMH has a reputation for being patient with stragglers, supporting the likes of loss-making Lacroix for nearly two decades — the group said it remained committed to the “Fenty ecosystem” through beauty and lingerie, and is leaving the door open to potentially reviving Fenty fashion in the future.

The ready-to-wear line is on hold “pending better conditions,” its statement said.