PARIS, France — John Galliano’s most recent Artisanal show for Maison Margiela reeked of revolution. The designer dismembered what the press notes called “the clichés of couture” and showed his creations on a parade of men (and a few women) in a continuation of his anarchic experiments with gender, electrifying the audience at the long-time design studio of what has always been one of fashion’s most mysterious, most avant-garde and most revered labels, known for its insider currency.

And yet, despite its storied past and the arrival of Galliano — a present-day genius among designers, who joined the label in 2014 — Maison Margiela has not turned a profit since Diesel founder Renzo Rosso acquired it back in 2002 from Mr Martin Margiela and his business partner Jenny Meirens.

At the time, Rosso was attracted to Margiela’s high-fashion cachet, which helped to provide a halo for OTB, the holding company through which Rosso controls Diesel, a multi-billion-dollar denim-maker turned lifestyle giant, along with Marni, Paula Cademartori and Viktor & Rolf.

“He had a crush on the brand,” said Benjamin Simmenauer, a professor at the Institut Français de la Mode. “There was no accounting rationale [to the acquisition] but affinity and a way to gain credibility in luxury. Margiela was the most avant-garde brand in the world.” 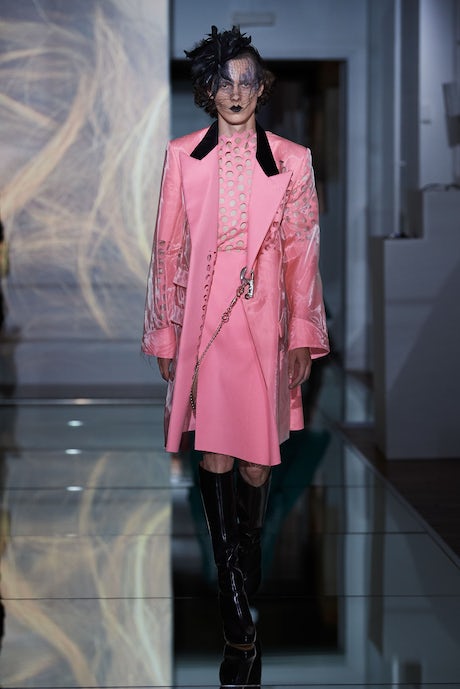 “Renzo Rosso has diversified into higher end fashion in an effort to build on his success in the denim category and elevate his group,” added Bernstein luxury analyst Luca Solca.

In an exclusive interview with Rosso and Maison Margiela Chief Executive Riccardo Bellini, Rosso called the brand a “bijou” or jewel.

“It’s a brand that inspires the whole fashion world,” he said. “I could have expanded it, but I didn’t do that because of Martin’s philosophy, which was all about exclusivity and small distribution. I never told him what to do with the collection. I only gave him some merchandising suggestions.”

“Every year, I provided the financing to keep it alive,” continued the Italian entrepreneur, who has invested in the loss-making label for 17 years, long after Mr Margiela stepped down in 2008.

But as his anchor brand Diesel stagnates, filing for Chapter 11 bankruptcy in the US in March, Rosso may be under new pressure to grow the other labels in his portfolio, and push Margiela to turn a profit.

I could have expanded it, but I didn’t do that because of Martin’s philosophy

Already Margiela generated €200 million in 2018, accounting for 14 percent of total revenue at OTB, which hit €1.4 billion the same year. And management expects the brand to reach revenues of €400 million in the next five years, doubling the size of the business. Margiela is currently on track to achieve 45 percent revenue growth in 2019, following 25 percent growth in 2018 and a flat 2017. But the path to profitability won’t be easy.

Margiela certainly has a powerful, perhaps unrivalled, brand heritage. Belgian designer Martin Margiela, an Antwerp Royal Academy of Fine Arts graduate, established his label in 1987, after working as a design assistant to Jean Paul Gaultier. He impressed the fashion world with his very first collection, redefining the notion of luxury.

“There was a form of humility. His Artisanal line is the equivalent of couture, but he called it Artisanal because it’s made with the hands. Words were very important for him,” said Marie-Sophie Carron de la Carrière, chief curator at Musée des Arts Décoratifs (MAD) and the curator of “Margiela, Les Années Hermès,” an exhibition held last year at the museum.

Margiela’s codes, totems even, included the absence of a logo; the colour white; the concept of recycling; and, of course, anonymity. The designer famously decided very early in his career never to give interviews or reveal his face to journalists or the public, a move that has contributed to the air of mystery surrounding the house. He was also among the first to stage shows in unusual locations such as metro stations and empty supermarkets, far from the Carrousel du Louvre where most of the shows took place at the time. He turned objects such as plastic bags into tops, and champagne corks into pendants.

Along with Austrian-born Helmut Lang, Martin Margiela came to influence an entire generation of designers with his deconstructed magpie aesthetic. But just as mysteriously as he had come, Margiela exited fashion in 2008, leaving the label’s studio to design the collections without a creative director for five years. The designer assured Rosso that the transition would be smooth, as he had never shown his face and because his studio was highly capable. But the results were lacklustre, and sales suffered. 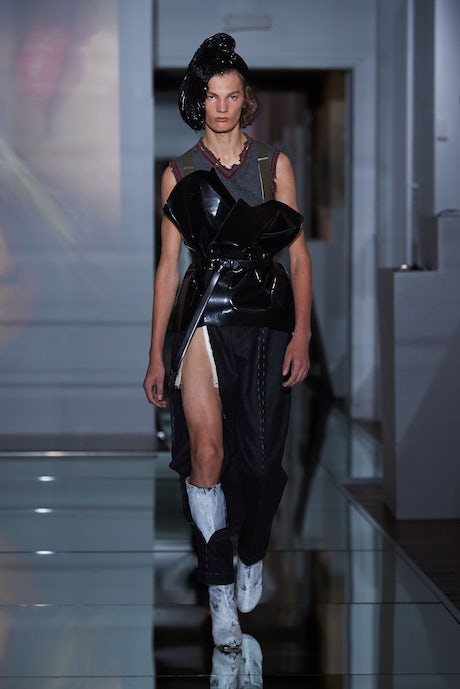 “You need a conductor,” said Rosso. “For me, the conductor was John Galliano, despite his difficult situation at the time,” he added, referring to Galliano’s spectacular fall from grace (and firing from Christian Dior) following racist and antisemitic rants he made in a Paris bar in February 2011. Galliano repented, and with the help of powerful allies like Vogue editor Anna Wintour refurbished his image. But Rosso’s decision was not without controversy.

Mr Margiela, however, approved: “You don’t want to hire a creative director but a couturier, and John Galliano is a couturier,” he said at the time, according to Rosso, who arranged a meeting between the two, at which Margiela famously gave Galliano his blessing and the license to interpret the brand in his own way. “Make it your own,” he said.

Galliano joined Maison Margiela in 2014, but it was a rocky start. Indeed, it took years for things to click. “After two and a half years, I saw the decortiqué,” Rosso explained, referring to Galliano’s technique of stripping garments to their bones in a way that was reminiscent of Margiela’s philosophy of deconstruction. “In that moment, I understood that we get it, that John had found his way into the Margiela universe.”

In recent seasons, Galliano has begun establishing his own codes at the maison, notably his exploration of gender fluidity, born from the intersection of the designer’s longstanding interest in sexuality; his penchant for decadence and rebellion; and the post-binary tendencies of a new generation of people.

“Sexuality and gender fluidity and not being concerned about male or female is something that has always been of interest to John, but never more so,” said Wintour in a video on the highlights of the Spring 2019 Paris collections. “This really triumphed at the Margiela show which really explored the idea of sexual identity in a very free way.”

“John in many ways captures the spirit of rebellion. It’s powerful platform for us, it’s a strong cultural currency,” said Bellini, who joined Margiela as CEO in early 2017. Recently, whispers circulating in Paris suggested that Galliano might be exiting the label, but the company firmly denies this. “I think John is very in love with the maison,” said Rosso.

John in many ways captures the spirit of rebellion.

“John is a key asset in our plan,” confirmed Bellini. “Couture at the top of our pyramid is a laboratory of unlimited creative experimentations where John and his team can express their best talents. Such experimentation ensures a constant flow of innovation which informs everything else we do.”

Margiela sells only a handful of pieces from its Artisanal collection, but uses the line as a halo for the brand’s ready-to-wear, leather goods and footwear (including the MM6 Maison Margiela contemporary line, which generates one-third of total revenue). For all non-Artisanal fashion lines, Margiela benefits from a partnership with OTB’s Staff International, a manufacturing and distribution company which also works with DSquared2, Just Cavalli and Vivienne Westwood. These categories, in turn, help drive appeal for beauty products, further down the pyramid, developed in partnership with L’Oréal.

To boost growth, the company is banking on a multifaceted strategy rooted in footwear, accessories, beauty, digital and retail expansion, with a focus on China.

Footwear and accessories currently account for 60 percent of sales. The company already has a strong presence in footwear, with iconic designs like the Tabi boot and Replica sneakers driving strong sales.

But Galliano has yet to create a blockbuster handbag for the label and is betting on a new genderless bag dubbed “Snatched” that was debuted at his latest Artisanal show. “Named after contemporary slang for good looks, the bag is a fold-over pochette with cut asymmetric angles and a handle through which the hand holds it in the manner of a snatching gesture,” says the brand in its marketing copy. 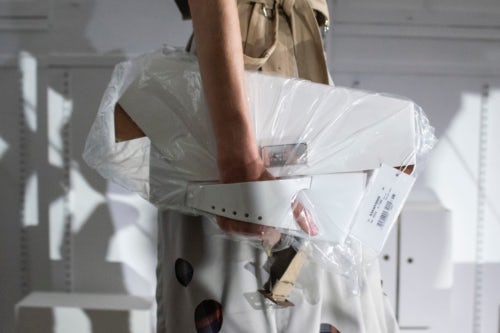 Beauty is another key area of investment. The retail value of the beauty business — which currently consists of two fragrance lines, Replica and Mutiny — is approximately €40 million. But Margiela plans to grow this with the launch of a gender-fluid cosmetics offering. “It’s one of the most interesting categories to play in,” said Bellini. “We see tremendous opportunity.”

Then, there’s the growing focus on digital sales. The brand’s direct-to-consumer e-commerce channel, which currently accounts for 10 percent of sales, is expanding by 50 percent annually.

Margiela also plans to grow its retail network, scaling from 60 to 100 stores in the next five years, with a focus on China. “The Chinese market is truly an opportunity because the new Margiela — being so fashion-forward, so modern in its message thanks to Mr. Galliano — it has a lot of traction with the Chinese consumer,” said Bellini.

Will the strategy work?

Mr Martin Margiela always looked up to Rei Kawakubo, the radical Comme des Garçons designer, because “her business was successful with no compromise,” said MAD’s Carron de la Carrière. Yet there may be a natural cap on how big a label like Maison Margiela can become without losing the sense of mystery and insider currency that is key to its attraction.

“Doubling the business is the maximum I want to do,” said Rosso. “I want to keep it cool and nice, not like other brands that are becoming giants. Desire and dream; I still have Martin in my head.”