The Wertheimer family, which owns Chanel, is notoriously secretive about its business dealings. Unlike many private companies whose kingpins wish to be recognised for their accomplishments, the Wertheimers prefer to remain in the shadows, which means that the complexity of their business dealings is difficult to untangle.

The family first entered the beauty business in the 1870s, when it invested in Bourjois, then known for manufacturing theatrical makeup. They own other brands, including swimwear line Eres and gunmaker Holland & Holland, but the crown jewel is Chanel, in which it has had an interest since the early 1920s when Pierre Wertheimer first brokered a deal with founder Gabrielle “Coco” Chanel to distribute her fragrance, Chanel No. 5.

Along the way, the family has kept the majority of its interests private, which has afforded the Wertheimers the luxury of time. After the house’s namesake passed away in 1971, the family waited more than a decade to appoint Karl Lagerfeld as its new creative director. To this day he remains at the helm, an extraordinary achievement in an era when the typical designer contract is three to five years, not 36. What time has also given the Wertheimers is the opportunity to build a globally recognised name into a global brand.

Charles Heilbronn, half brother to Alain and Gérard Wertheimer, runs the family office — Mousse Partners — which is a major investor in the beauty specialty retailer Ulta, and has also invested in the likes of Bonobos, Paddle8 and One Kings Lane. (Heilbronn also sits on the board of Ulta.) Then of course there is Chanel International B.V., a private limited-liability company incorporated in the Netherlands, presumably for tax reasons. It is unclear what part of the Chanel business is included in Chanel International, but those familiar with the inner workings of the business suggest that it likely accounts for the majority of the company’s holdings including the global Chanel, Eres and Holland & Holland businesses.

Each year, Chanel files a financial statement to the Netherlands Chamber of Commerce, which sheds some light on the health of the core business. Its most recent filing, which appeared online this week, seems to indicate that it may be time for the Wertheimers to take stock and reconsider their strategy going forward.

For the past two years — 2015 and 2016 — Chanel International has reported revenue declines as well as double-digit drops in profitability. In 2016 annual sales were under $6 billion, down about 10 percent from the year previous, while net income fell almost 35 percent from $1.34 billion to $874 million. Operating income dipped 20 percent to $1.28 billion.

In the most recent report, Chanel attributed some of the losses to the sale of its UK business — approximately 11 percent of global sales — to another entity also under its control, but also to the commercial effect of terrorist attacks in Europe. The company’s April 2015 sale of the Bourjois beauty brand to Coty also impacted sales in the first four months of 2016, as well as the last eight months of 2015.

A representative for Chanel confirmed to BoF that comparable store sales at the brand were flat in 2015. In the latest filing with the Dutch Chamber of Commerce, the company is quoted as saying that 2016 sales were “stable,” with performance up 11 percent in the second half of the year.

This means that while Chanel’s business is not growing in the same way as Gucci, which was up 43.4 percent year-on-year in the first half of 2017, it is consistent. This is perhaps why the Wertheimers — who saw their dividends more than double to $3.4 billion in 2016 from $1.6 billion in 2015 — are not in a rush to make drastic changes.

Chanel’s identity, as conceived by Lagerfeld and image director Eric Pfrunder, with support from studio director Virginie Viard — a potential Lagerfeld successor according to sources — and store designer Peter Marino, has made it the most famous fashion brand in the world. Bigger than Dior, bigger than Hermès, bigger, still, than Gucci.

But some suggest that it is time for a refresh. “They seem to be suffering in leather goods, similarly to other brands which have failed to innovate enough: Prada, Tod's, Ferragamo,” notes Luca Solca, head of luxury goods at Exane BNP Paribas. The brand has also been slow to launch e-commerce. While beauty and fragrance can be purchased online, margin-driving leather goods remain available in stores only.

In January 2016, longtime global chief executive Maureen Chiquet exited the company due to differences of opinion in strategic direction. She was replaced by Alain Wertheimer, who, according to a statement from the company, will continue in the role working alongside the team’s senior executives including president of fashion Bruno Pavlovsky and president of fragrance and beauty Christine Dagousset. It is thought that the family is now grooming another generation of Wertheimers to lead the house into its next phase, in particular, Sarah Wertheimer, the 33-year-old daughter of Alain.

To be sure, the Wertheimers are not complacent. “We are probably one of the last business models based on creation, and we want to continue that,” Pavlovsky told BoF in a recent interview. “That doesn’t mean that one day we will not do e-commerce, but we are not rushing… because we want to propose the best experience.” Whatever happens next, it seems that the family will continue to make measured decisions, almost wholly uninfluenced by the market’s opinion of Chanel’s performance. They have the luxury to do so.

Amazon and Wal-Mart set to battle over Nordstrom? Foursquare has reported that the retail giants may compete to buy the department store chain. The prediction, based on the intelligence company’s data insights, comes as the Nordstrom family searches for a buyer. Competition between Amazon and Wal-Mart is mounting: the latter has announced plans to partner with Google Home on a voice-shopping platform in a bid to keep up with Amazon’s Alexa.

J. Crew names new CFO as sales drop deepens. The company’s sales fell 7 percent, while total revenues fell 2 percent to $560.9 million for the second quarter of 2017. As J. Crew struggles with a long-term debt of $1.72 billion, it has appointed Vincent Zanna its chief financial officer. Despite resistance from long-term loaners, the company completed a debt exchange to push maturity back to 2021 from 2019.

Coty shares slide. Shares at the American cosmetics giant tumbled 18 percent to $16.08 in New York trading — the biggest fall since the company went public four years ago. The loss is attributed to the conglomerate’s difficulties in integrating the 40 brands it acquired from Procter & Gamble for $12.5 billion last year. Two recent acquisitions — GHD and Younique — fared better than expected, boosting sales to $2.24 billion.

Macy’s to cut 100 jobs. The restructuring is expected to save over $30 million on a yearly basis by merging three merchandising units into one division. The retailer also named eBay executive Hal Lawton as president, after which shares rose as much as 4.5 percent. Lawton, who joins the company on September 8, will be responsible for the Macy’s brand as it faces a declining customer base, amid a wider department store crisis.

Swiss watches rebound as exports climb. Driven by growth in high-end mechanical timepieces, shipments rose 3.6 percent to $1.8 billion in July. An 18 percent slump in timepieces costing less than 200 francs was offset by a 5.9 percent rise in exports of watches wholesaling for more than 3,000 francs. The performance of the higher-end segment benefits Richemont, whose brands include Cartier and Jaeger-LeCoultre.

Topshop to relaunch in Australia. British parent company Arcadia Group will buy parts of the fast fashion business and keep four stores running in the major cities of Sydney, Melbourne and Brisbane. The move is a trimmed-down version of the brand's previous Australian presence, which, until May, included 17 stores. The news comes three months after former franchisee Austradia fell into administration amid fierce competition in the persistently soft retail market. 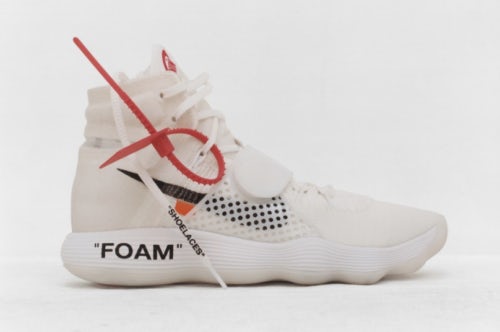 Virgil Abloh confirms Nike collaboration. The Off-White designer has reconstructed 10 classic sneakers from the sportswear giant’s archive, including the Air Jordan 1, Hyperdunk and Air VaporMax. The collaboration comes as Nike has lost some degree of “cool” in the eyes of young consumers, who have shifted attention to arch-rival Adidas in the wake of successful collaborations with the likes of Kanye West and Pharrell.

Mickey Drexler named Outdoor Voices chairman. Drexler's appointment to the fast-growing activewear brand's board of directors follows a $9 million convertible note led by the executive. Drexler’s new role follows a decision in June to step down as chief executive of J. Crew after 14 years. Drexler continues to work with J. Crew in the capacity of chairman and retains a 10 percent stake in the company.

Stitch Fix adds over 100 contemporary brands. The wholesale personal styling service will now offer brands including Theory, Kate Spade, Rebecca Minkoff and Alice & Olivia, with pieces ranging in price from $100 to $600. The new offering comes after customer requests for more well-known brand names and higher quality constructions. In a challenging contemporary market, Stitch Fix is reportedly nearing $1 billion in sales, and is believed to have filed for an IPO at the end of July.

JD.com reportedly ramping up presence in Southeast Asia. The Chinese company is in advanced talks with Thailand’s Central Group to launch a $500 million joint e-commerce venture in the region, according to people familiar with the matter. Further sources report the e-commerce giant has invested $100 million in Indonesian ride-hailing startup Go-Jek. Both reports come as the retailer looks to expand its overseas business beyond China and boost its presence in Southeast Asia where rivals Alibaba Group Holding and Amazon are ramping up competition with new services, such as a quick delivery service in Singapore.