The footwear designer is opening his first men’s boutique in London’s Burlington Arcade and aims to make men’s shoes 20 percent of the business.

LONDON, United Kingdom — When one thinks of Manolo Blahnik, what may first come to mind are the Spanish designer’s range of high-end, colourful and feminine heels — in particular, the stiletto, which he revived in the 1970s and was popularised by the American television show “Sex and the City” in the early 2000s — not his men’s shoes.

But Blahnik, who has produced men’s footwear since launching his namesake label 45 years ago, has big ambitions to grow the business, starting with his first standalone shop dedicated to men in London, opening on July 5. “I’ve always designed for men, but only had five or six clients who would come into the ladies' shop,” Blahnik told BoF. “But in the past two years I’ve had an incredible amount of [men] asking for shoes, so you have to do it.”

The launch will include over 35 styles of men’s shoes (offering 134 variations in-store) ranging from zebra-printed, pony hair loafers to olive green, raffia dessert boots handwoven by a team of artisans in Morocco and finished in Italy. 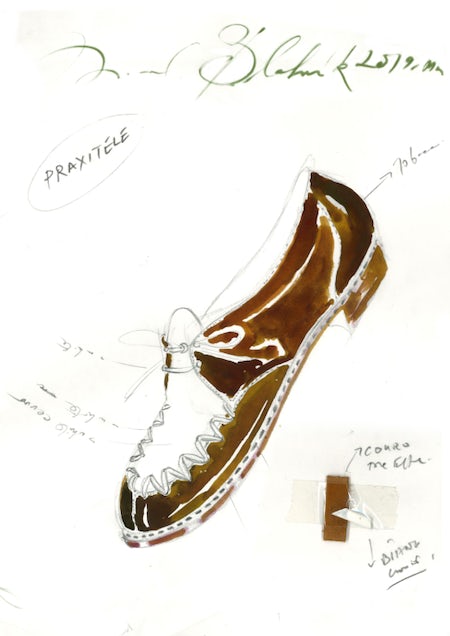 The store’s location in London’s iconic Burlington Arcade was an obvious choice for the designer. “Bond Street and Mount Street I’ve hated for years. I want [the store] to be around jewels, sweets and perfumes — this is the London I love," said Blahnik.

It’s a strategic spot, too. The arcade, where Blahnik also opened a small women’s store in 2016, has seen an uplift in luxury tenants in recent years, following Thor Equities’ £104 million (about $137 million) acquisition and redevelopment of the space in 2010, which brought in a roster of brands including Chanel-owned Eres, Maison Michel and Bell & Ross, as well as Frédéric Malle, La Perla and perfume house Atkinsons.

The target, said chief executive Kristina Blahnik, is to get men’s to account for 20 percent of the business. “But that’s going to take many years,” acknowledged the executive, also Manolo’s niece, who took on the role in 2009. (She has since overseen collaborations with Rihanna and Vetements, and grown the company’s turnover by 710 percent, while having also expanded the brand’s monobrand retail to 16 stores worldwide and over 300 points of sale.)

The men’s store launch will be accompanied by a new men’s advertising campaign and a dedicated men’s Instagram account, with men's accessories to potentially follow later in the year. Men’s stores in Asia are also on the agenda. “We’re not the kind of brand that has aggressive growth targets,” said Blahnik. “We want it to grow organically. That’s the only way to grow it authentically over time.”

Blahnik’s business expansion, which includes the opening of three new factories outside of Florence and Venice in Italy, comes after sales jumped nearly 25 percent to £11.7 million in 2015. Meanwhile, rivals like Aquazzura also have plans to launch men’s footwear as well as fragrance and eyewear later this year, while Christian Louboutin is focused on growing its beauty business, having signed a new global licensing agreement with Puig.

How Mid Heels Became the Cash ‘Kitten’ of Footwear