Mansur Gavriel is generating Birkin-esque waiting lists for its colourful handbags. Founders Rachel Mansur and Floriana Gavriel discuss getting the brand off the ground and the perks and pitfalls of its rapid growth.

NEW YORK, United States — It was mid-afternoon on December 9th when the founders of Mansur Gavriel took to Instagram with great news for their more than 123,000 followers. The handbag line’s fall e-commerce delivery — which included every style, make and colourway available for the season — had finally arrived.

Within an hour, 95 percent of the stock was sold out. The Instagram post was flooded with hundreds of comments, some expressing pure joy (“OH MY GOD I GOT ONE!!!!!!” — @youstopit), others defeat (“I’m deeply disappointed. I’ve been waiting for almost a year to buy this bag and just like that I missed my chance again,” — @pat_tapia). A trading game emerged, with commenters putting up bags for sale or swap. “Have a large black/ballerina backpack — would like cammello or black raw instead,” offered @sminding. “Looking for a large black bucket with ballerina and mini cammello with dolly or antico interior,” begged @figliannovembre.

This kind of discussion went 700 comments deep and is just one example of the passion and obsession that has emerged around Mansur Gavriel handbags. Those who were unable to purchase the bag of their dreams were referred to a customer service email, where designers Rachel Mansur and Floriana Gavriel and their small team helped as many people as possible to find one of their bags through another retailer or at least get on a store’s waiting list. (Mansur Gavriel does not offer its own waiting list and the bags will not be available again on its own e-commerce site until the spring.)

Launched in early 2013, Mansur Gavriel’s drawstring bucket bag, available in a range of colours, with popular editions including neutral shades such as black and tan, lined with vibrant hues such as lipstick red or electric blue, is one of the first ‘it bags’ to emerge since the recession and the story behind its success is the stuff of fashion start-up fairytales.

Mansur, 31, and Gavriel, 32, met in 2010 at an XX concert in Los Angeles. A Rhode Island School of Design graduate who spent the first part of her twenties working odd jobs, Mansur was based in LA. Gavriel — who interned at European fashion houses including Lanvin, while earning her fashion degree at the University of the Arts in Bremen, Germany — lived in Berlin, also trying to find her professional footing. They became fast friends, and soon realised that they “shared a lot aesthetically,” according to Mansur.

After Gavriel visited Los Angeles once more and Mansur visited Berlin, the duo knew that they wanted to work on a project together. Like many good ideas, the concept for a handbag came out of a personal need. “There were few [bag] brands at the contemporary price point that held a good value,” said Mansur. Their goal was to take traditional vegetable tanned leather, a material mostly used in men’s accessories, and make it “sharp, cool and elegant.” After two years of development — during which they saved up money to produce the first prototypes — two styles emerged: one drawstring bucket, one top-handle horizontal tote. The duo were set on doing coloured interiors, and experimented with techniques such as silk screening leather at Mansur’s barn in Santa Monica. They made samples in Los Angeles and New York, before settling on Italy as the production base for their bonded leather bags. 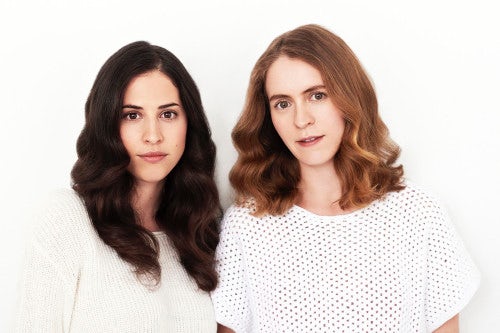 By 2012, the product was ready and they allotted a modest budget of $100 to photograph the bags styled against pink paper, alongside a few pieces of fruit and a plant, shot in the studio space of Mansur’s mother, a photographer. Having obsessively researched “Excel sheets full of stores” where they wanted to be stocked, the duo emailed their digital look book and line sheet to dozens of shops, following up with emails and phone calls. Booking a booth at the Capsule tradeshow in New York in February 2013 proved more fruitful: orders were placed by reputable American independent boutiques including Bird and Creatures of Comfort. But it was Gavriel’s chance encounter with designer, showroom operator and multi-brand boutique owner Steven Alan at an art gallery in New York that provided the initial boost the young brand needed.

“I remember thinking that she had all the right references,” said Alan. “She asked if she could show me the collection before finishing to get my feedback and when I saw everything, I was even more impressed, and was excited to be their first customer. Sometimes you meet someone and you just know.”

In early 2012, both women moved to New York to set up a base for the company’s operations, although Mansur still spends time in Los Angeles and Gavriel in Europe. Mansur Gavriel’s debut collection hit stores in early June 2013, and within weeks blogger Garance Doré professed her love for the large black bucket bag lined in a shade of red that the brand calls Flamma. By July, both the bucket and tote were generating long waiting lists. And by New York Fashion Week in September, Mansur Gavriel had become the bag of choice for editors and street style stars, as well as Kirsten Dunst, Emma Watson and Miranda Kerr.

The Black-Flamma bucket bag continues to be Mansur Gavriel’s top seller. Alongside this silhouette and the tote, the company also offers an envelope clutch and a backpack, with new colours and fabrications added each season, including canvas and pebbled leather for spring. Aside from design, a big part of the line’s appeal is price. Costing between $400 and $1000, the bags fall well below the usual price of products with ‘It’ appeal. The scarcity of the bags — at first unexpected, now more calculated — has also contributed to the brand’s long waiting lists. Instead of working with multiple manufacturers to meet the demand from its wholesale accounts, the brand currently works with only one factory. “We don’t want to make the fatal mistake of taking too many orders and letting the quality diminish,” said Mansur.

The demand is unlikely to die down anytime soon. The Mansur Gavriel bucket bag was one of the three most-searched items in 2014 on personalised fashion marketplace Lyst. While the privately owned company declined to disclose annual sales, its founders say they crossed over into profitability in their third season. Currently, sell-through at stockists — including Net-a-Porter, Barneys New York, Bergdorf Goodman, Colette and Opening Ceremony, which launched an exclusive range of colours in November — is 100 percent.

Thanks to these results, Mansur Gavriel’s story is the envy of start-up fashion labels struggling to land their first key store account. From the beginning, the duo was able to negotiate favourable deals with wholesalers. Unlike many brands, who have to front money for production, stores send Mansur Gavriel a deposit for goods before they are produced. Retailers are willing to agree to these terms because there are virtually no markdowns on the brand’s product.

Constant cash flow has also allowed Mansur Gavriel to expand its marketing budget. For Spring 2015, the duo hired models for the first time and hosted a presentation during New York Fashion Week. The team, too, is growing. There are still only six full-time employees, including the founders, but the level of talent is pretty exceptional for a brand that is just five seasons old. The company’s director of sales, Anne Wallach, came from Marc by Marc Jacobs, while its director of finance, Pamela Yueh, was previously at Rag & Bone. “There’s so little time. The hope is that this will give us an opportunity to focus more on product development,” said Gavriel of the hires.

Therein lies the imperfection in Mansur Gavriel’s perfect story. When a brand manages to produce multiple hits, how does it keep up momentum? “It’s not like a ready-to-wear collection that is released four times a year with many different looks,” said Shira Sue Carmi, founder of Launch Collective, a New York-based firm that advises emerging fashion brands. (While Carmi hasn’t formally worked with Mansur Gavriel, she has served as one of its many unofficial advisors.) “The first couple products were so right for the customer. The stakes are higher now.”

What’s more, even if Mansur and Gavriel get the product right every single time, other challenges await. There is the matter of appeasing important retailers that demand exclusives, or simply want to place bigger orders. For now, the company has the luxury of saying no — a rare luxury, indeed, for a fashion business of any scale — but as long as the bags continue to sell out, retailers won’t complain.

The brand must also manage the expectations of its growing fanbase. As illustrated above, consumers are passionate about the bags and can become outraged if they are unable to procure exactly what they want. “We completely understand the frustration of waiting for a restock and not receiving a bag after much anticipation,” Gavriel said. “However, we are a small brand that just launched in June 2013 and considering it has just been just a year and a half since we hit the market, we have truly grown exponentially or at least within a realm of growth we feel comfortable with. Our primary concern is for the customer, in that if we grow too quickly, the product quality may suffer. As we continue to grow, ideally we will add more infrastructure, such as a systematic and fair waiting list.”

The duo must also deal with a growing number of intellectual property violations. The bags, unsurprisingly, have been knocked off left, right and centre. The most flagrant copy, a $29.99 fake leather rendition of the top-selling Black-Flamma bucket, was released in November by Forever21. (It is no longer on the retailer’s site, although it’s not known whether it was pulled or sold out. Mansur and Gavriel declined to comment on legal matters surrounding counterfeits.)

To be sure, these are the sorts of obstacles normally faced by brands 10 or 15 years older than Mansur Gavriel. “Building a sophisticated team is really important for them,” said Carmi. “Getting the right group of people around them that can help them deal with issues at this level is what they need to be focussing on right now.” For Mansur and Gavriel, the most important thing is to keep making things that they love and to do it at a comfortable pace. While investors are certainly circling their office, on New York’s Lower East Side, for the moment they aren’t ready. “This is something we want to be doing for a long time,” said Mansur. Adds Gavriel, “It’s about building our story in the right way.”