“When I was young, we were burning bras, we were getting high all the time and we dated all the time,” she said. “Why do you think we would accept that our life ends when we turn a certain age?”

But age is a subject that comes up for Slater more than most. That’s because she is closing in on 500,000 followers on Instagram, better known as a platform for teenage influencers. Posting under the handle “Accidental Icon,” Slater wears everything from Balenciaga to JW Anderson. Valentino, Uniqlo and other companies have hired Slater for advertising campaigns and collaborations on Instagram and her blog.

Slater, who began blogging in 2014, is an early success stories in the resurgence of women aged 50 and over, exerting the kind of influence that many Insta-famous 20-year-olds could only dream of having. Trend-watchers trace the start of the “Greynnaisance” to 2015, when the then-80-year-old author Joan Didion became the face of Céline and Saint Laurent tapped Joni Mitchell for its own campaign. More recently, Isabella Rossellini, Jan de Villeneuve and Daphne Selfe have posed for Sies Marjan, Simone Rocha and Tank Magazine, respectively.

Why do you think we would accept that our life ends when we turn a certain age?

Baby boomers have been largely absent from advertising, especially in high-fashion, despite driving 42 percent of spending in the US, versus 13 percent for millennial and Gen-Z consumers, according to a 2017 report from Moody’s. Typically, companies gear their campaigns towards a younger demographic, assuming the ads will also appeal to their parents.

Now, some companies are reversing that formula.

Mango hired Slater to reach beyond its mostly young customer base, said Diana Puig, communications director at the fashion retailer.

“The impact of the campaign was excellent, [because] Lyn influences not only older people, but also millennials,” she said.

“When you show an older woman in a campaign, not only does she have the power to inspire a younger person, but also the power to inspire her generation,” says Ari Seth Cohen, 36-year-old founder of Advanced Style, a blog and Instagram account devoted to capturing the “sartorial savvy of the senior set.” 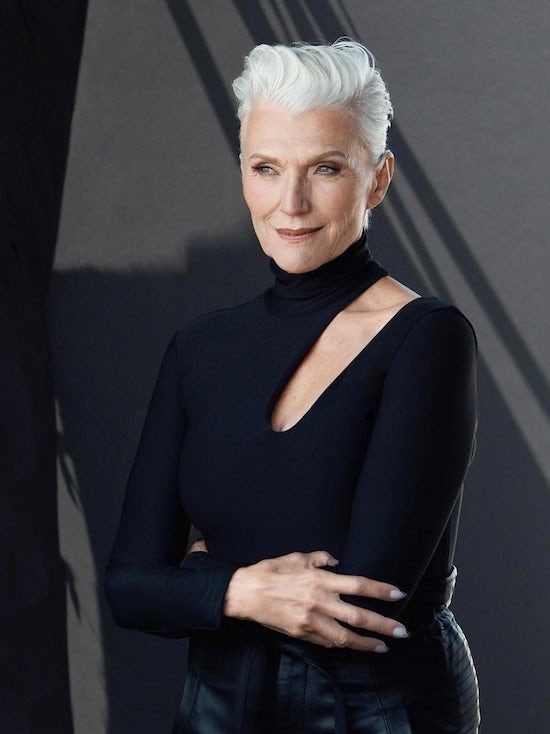 Older models also serve as storytellers, rather than just faces who sell a garment.

Among them is Maye Musk, Canadian/South African model and dietitian, who is also mother of Tesla chief executive Elon Musk. Three years ago, her agent sat her down to create an Instagram account, because all of the models were doing it.

“I started posting pictures, people loved it and photographers contacted me saying they’d love to shoot me,” she says. “Suddenly I’m an influencer, and I’m going to be 70 in a week!”

And so rolled in the New York Magazine and Elle covers; the runway shows — most recently at Dolce & Gabbana’s Alta Moda in New York — and the contracts. She is a CoverGirl ambassador at 69 from Autumn 2018, the first face of the brand above the age of 65.

She says the same level of exposure would not have been possible 10 years ago, when she would have been dependent on an agent to find her work.

“After 50 years of modelling, I’m an overnight success,” she quipped.

Still, older models remain relatively rare. Slater is the first client over 60 at her agency, Brigade, said managing director Max Stein. He added that it was her “voice, style and community” that led the company to sign her, “not because of her age.”

CoverGirl hired Musk to appeal to older women, much as the company has hired models of different ethnicities to include a broader range of demographics, says senior vice president Ukonwa Ojo. The campaign included images of Musk wearing “ageless” products from the CoverGirl + Olay collection which included liquid foundation and primer, but also “smoky eye” makeup, a category that traditionally is targeted at millennials.

A by-product of the baby boomers’ rise has been their appeal to the millennial and Gen-Z generations.

A by-product of the baby boomers’ rise has been their appeal to the millennial and Gen-Z generations, inspired by women who show that life doesn’t end after the age of 50.

“There’s a huge industry which is going to spring out around giving confidence to older working consumers,” says Richard Cope, senior trends consultant at Mintel, adding that beauty and fashion brands are starting to pay attention to older retirement ages and an attitude that comes with feeling young. The prospect of retiring at 65 and having the clothes you wear dictated by the traditional notions of age is well behind us.

Cohen says his Instagram account counts 25-35 year-olds as its main audience, with Gen-Z not far behind, while Slater and Musk are predominantly followed by the same age bracket. According to HYPR, an influencer search and discovery engine, 65 percent of Slater’s followers are under 32, as are 43 percent of Musk’s online fan base.

“When I grow up I want to be Maye Musk,” reads one comment on Musk’s account by Scarlet Jenkins, a 19-year-old from the UK. In the image, Musk poses in a sequin Dolce & Gabbana dress and headpiece in New York. The caption? #JustGettingStarted.