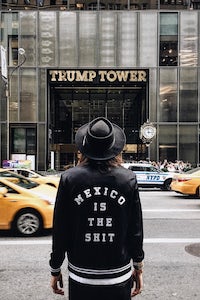 MEXICO CITY, Mexico — “Mexico is the shit.” The slogan about sums up current sentiment toward the North American country, which has attracted quite a swell of support since United States President Donald J. Trump first suggested a wall be built along the border of the two nations. And with the threat of punitive US tariffs on imports from the country — which Trump claims will pay for the border wall — pro-Mexico sentiment has only grown.

Whether or not any of Trump’s proposed trade policies will actually be enacted remains to be seen, but their mere specter has already spurred mass outrage. Mexico City-based designer Anuar Layón's “MEXICO IS THE SHIT” slogan, which he originally etched into a varsity jacket as a gesture of playful patriotism, has become an anti-Trump signifier, spotted on the backs of scenesters from Mexico City to New York City.

“The first days after the election, the environment was nervous and indignant, but it has given Mexicans a more patriotic feeling — and the strength to begin to support and elevate the things that are happening in Mexico so that, little by little, we are able to stop depending on the United States and we can start to change the stereotype that we have, as country and as a people — talented and creative people,” says Layón, who created the line for Mercadorama, which sells limited-edition music merchandise designed by an associated collective of street artists.

"On social media, after Trump started verbally attacking Mexico, many people looked for something that could represent them and could give them a voice,” he adds. “That’s how, without expecting it, people started to use ‘Mexico is the Shit’ as a way to show that they did not agree with everything Trump was saying about us.”

The movement is socio-political, but also underscores just how “cool” Mexico is right now, with tourists generating a total economic impact of $19.6 billion in 2016, a 10 percent jump from 2015 and a 54 percent increase from 2012, according to MSLGroup for The Mexican Tourism Board.

As the number of foreign tourists visiting Mexico has risen, so has the affluence of the country’s residents. In 2016, Mexico was home to 173,400 millionaires ($1 million-plus), 18 of whom were billionaires, according to real estate consultancy Knight Frank. The size of country's millionaire population is projected to increase by 40 percent over the next decade.

That’s all good news for Mexico’s luxury market, which grew to $3.56 billion in 2016, up 55 percent from $2.3 billion in 2011 and is growing at a compounded annual rate of 9 percent, according to Euromonitor International, making it both the largest and fastest-growing luxury market in Latin America. That’s thanks in part to low import taxes on imported goods, making luxury goods sold in Mexico similar in price to the US. “The difference now is only 5 to 10 percent, and in some cases it’s the same price,” says Carlos Salcido, chief marketing officer of Palacio de Hierro, a chain of upscale department stores.

More recently, the local luxury market has been buoyed by a weak peso, which encourages Mexicans who may have planned shopping trips to New York or Miami in the past to shop locally. It's also a reason for tourists to shop more briskly.

While official Mexico-to-US tourism numbers from the first quarter of 2017 have yet to be reported by the government’s National Travel and Tourism Office, searches for international flights to the US dropped 17 percent in the month after Trump’s inauguration, according to flight search app Hopper. “We think this is only going to help strengthen the domestic market,” says Joseph J. Sitt, president and chief executive of Thor Equities, a real estate development and investment firm.

Not only are there more brands, but I think people are embracing Mexican fashion now more than ever.

While the Mexican consumer still favours traditional luxury brands — Salcido reports that Tiffany, Salvatore Ferragamo, Gucci and Hermès all track well with local customers — the array of options is broader than before, both in terms of international players and local upstarts. “There are more international designers selling in Mexico — not only the big luxury brands, but Mary Katranzou, Sonia Rykiel, Alexander McQueen and Proenza Schouler…. On social media, there are Mexican girls wearing brands like Vetements and Off White, which is relatively new,” says Karla Martinez, editor-in-chief of Vogue Mexico and Vogue Latin America. “And since moving here in 2015, I have observed more and more young designers coming onto the fashion scene. Not only are there more brands, but I think people are embracing Mexican fashion now more than ever.”

“When the schools started opening up their [fashion] programs, we started seeing more and more local designers in the streets, stores, boutiques and selling online,” adds Mexico City-based fashion designer Carla Fernandez, who launched her namesake label 15 years ago and created the first fashion and textile curriculum for design school Centro. “Now that practically every luxury brand has a presence in Mexico, the most original and coveted items are made in Mexico and by local talent.”

The market heat could be felt at Mexico City fashion and design trade show Caravana Americana, which welcomed 30 percent more international buyers looking for “fashion and crafted luxury goods” in March 2017 than the year previous. But the greatest business focus for local designers is the local market, especially as the Trump saga unfolds. “The attitude lately is ‘consume local,’ and many try to promote the boycott of US brands,” says Regina Barrios, co-founder of Caravana Americana.

But even if Mexico’s local luxury market seems poised to thrive under the Trump administration, it is not quite a promised land. Political corruption and illegal businesses fueled by local drug cartels are still rampant. And while Mexico currently has ten free trade agreements in place with 45 countries, there is no getting around the fact that the US currently imports $304.6 billion worth of goods from Mexico tax-free because of the North American Free Trade Agreement (NAFTA). If NAFTA is renegotiated and a hefty trade tariff is put in place, American companies may indeed begin to manufacture more products Stateside, deeply affecting the overall health of the Mexican economy.

“Asian economies and Mexico suffer significantly from declining exports to the US, despite the depreciation of their currencies against the USD and some substitution into other markets,” wrote Euromonitor International’s Daniel Solomon in a recent report. “Business investment and household consumption also decline due to lower exports revenue. The imposition of higher tariffs on US imports counters some of these effects by increasing demand for domestic output, but at the same time it reduces consumer spending even more.”

So while Mexico's luxury market is accelerating, there is cause for concern. “It is important to understand that the commercial relationship between Mexico and the US is still very important, despite what Donald Trump is doing, and we must learn, adapt and keep moving forward,” Layón says.

“We should all be worried — not only the Mexican people,” adds Fernandez. “But in Mexico, we’ve confronted many crises and we know how to face them.”

The Real Dangers of Border Adjusted Tax for Fashion