LONDON, United Kingdom — “Just do it, everybody,” said President Barack Obama, to rapturous applause from his audience at Nike’s headquarters in Beaverton, Oregon.

Back in May, Obama was visiting Nike HQ to build support for the Trans-Pacific Partnership (TPP), which, if passed, will be the largest regional trade accord in history — and one that companies like Nike have a major stake in.

The TPP would eliminate tariffs on textiles and apparel between 12 nations, including the US — the world’s largest consumer of apparel — and Vietnam, the third largest emerging market apparel supplier after China and Bangladesh. In 2014, US companies paid $400 million in tariffs on shoes imported from TPP countries, according to the Footwear Distributors and Retailers of America.

Unsurprisingly, Nike is a big supporter of the TPP, and it’s been letting the president know. Since 2006, Nike conducted more reported lobbying containing the word 'Trans-Pacific Partnership' than any other company, according to data collected by the Center for Responsive Politics, a US non-profit that tracks money in politics and its effect on policy. Last year, Nike spent $1.1 million on lobbying, up from $400,000 in 2012, according to the Center. In the first half of this year, Nike spent $560,000 on lobbying.

Simply put, lobbying is when a company or organisation seeks to influence a legislature. In practice, it means the company employs lobbyists — or pays to join an organisation that lobbies on behalf of its members — to consult with the government (or EU) officials responsible for drafting policies and passing laws.

Lobbying helps government create smarter policies. It is an industry's responsibility to explain to government how different policies will affect us, positively or negatively.

“Part of our job is to be regularly meeting with administration policy makers,” says Julia Hughes, president of the United States Fashion Industry Association (USFIA), a Washington-based group that lobbies to eliminate trade barriers on textiles and apparel. The USFIA’s role, she says, is “keeping in front of them the issues that are important for brands and retailers.”

Compared to the sums spent by an industry like pharmaceuticals, this is small change. (According to the Center for Responsive Politics, 10,616 lobbyists have spent nearly $1.63 billion this year.) Nonetheless, for the fashion and luxury industries, lobbying matters.

“Companies lobby because of their bottom lines,” says Viveca Novak, editorial and communications director at the Center for Responsive Politics. They lobby, she says, on any issue “that affects their ability to turn a profit.” In recent years, fashion companies have lobbied on issues including e-commerce, product safety and intellectual property.

But, does it work?

Back in 2009, Chanel and LVMH lobbied over a change to EU law. At the time, competition rules allowed brands to impose restrictions on which distribution networks sold their goods. These rules were set to expire in 2010, and the law proposed to replace them would lift these restrictions online. Luxury companies were worried that without “selective distribution” controls, their products could be sold on mass-market sites like eBay, potentially next to fake designer goods.

So, they sent in the troops. In February 2009, Karl Lagerfeld travelled to Brussels to encourage European Competition Commissioner Neelie Kroes to change an initial draft of the law. Companies including LVMH and Chanel employed lawyers and lobbyists, who consulted with the European Commission staff drafting the new rules, and reached out to press with the story.

It was successful: the final version, distributed in July 2009 and adopted in 2010, gave goods makers more control over online sales.

There are a few reasons why this lobby worked. First, the argument — lobbyists working for the luxury companies built a legal case that argued luxury and mass-market companies needed different protections on how their products were placed on the market. They pulled out the figures — luxury makes up 3.5 percent of Europe’s overall GDP and employs 1.5 million people — to make the issue relevant to the wider economy, in a way that spoke to politicians.

Second, this case gained momentum by generating widespread interest — it affected real estate and online businesses, and there was public engagement, as it was believed online companies would create jobs. In the end, the legislature protected online, but made an exception for luxury, much to the chagrin of companies including Ebay, which lobbied hard against the restrictions.

The law change also had the support of the luxury industry at large. Companies including Hermès, LVMH, Net-A-Porter, Selfridges, Swatch Group and Chanel submitted comments to the European Commission on the draft bill. “Selective distribution is at the heart of the luxury goods industry’s business model,” read a comment submitted by LVMH. It “greatly contributes to the long-term sustainability and survival of the industry.”

And yet, the initial law didn’t take this into account. “We’re trying to educate government officials and decision makers on the business reality,” says Julia Hughes of the USFIA. “The industry changes at a fast pace. And regulators don’t necessarily keep up with those changes.”

According to Steve Lamar, executive vice president of the American Apparel and Footwear Association (AAFA), lobbying helps government create “smarter” policies and it is an industry’s “responsibility” to explain to government “how different policies will affect us, positively or negatively.” 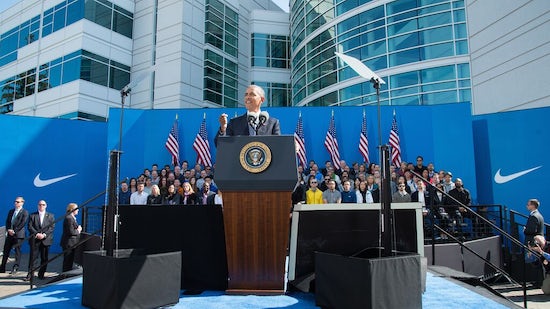 Indeed, in some ways it’s in the government’s interests to work with lobbyists. When President Obama visited Beaverton — after Nike approached the White House, according to an administration official — Obama and the company put on a united front. Critics of the TPP say free trade with Asia Pacific would mean companies outsource more US jobs to cheaper Asian nations; something Nike has done a lot of over the last 20 years.

Nike chief executive Mark Parker announced that, if the TPP passes (negotiations concluded in October), Nike will create up to 10,000 new US jobs in manufacturing and engineering. “A free flow of goods in the global economy unleashes our capacity to invest and to innovate,” Parker told the crowd. “Insourcing” is gaining momentum, the president concurred.

Still, corporate lobbying isn’t always successful. In 2006, the Council of Fashion Designers of America (CFDA) went to Washington. “We lobbied on behalf of all designers and demanded the same rights other creative industries have in protecting their intellectual property,” CFDA president Diane von Furstenburg wrote in her annual letter to members that year.

The Design Piracy Prohibition Act (DPPA) would have given designers three years of intellectual property protection if they registered a new design within six months. The CFDA hired two lobbyists, one with ties to each political party, and the bill gained bipartisan support, including from high-profile senators such as Hillary Clinton. Designers including Zac Posen and Narciso Rodriguez argued the case in Washington. However, it still failed to pass.

In the cases of the TPP and selective distribution, legislators were moving these issues forwards, regardless of whether or not the fashion industry got involved. “Creating legislation from scratch, to benefit a specific industry, that is a much more difficult challenge,” explains Susan Scafidi, academic director of the Fashion Law Institute at Fordham University, who helped draft the proposed design protection bill. “Because you have to develop the interest in creating any regulation at all.”

There were also political obstacles: “Politicians hate to vote against anything that might appear to be elitist,” says Scafidi. “They are reluctant to vote for luxury.” It also didn’t help that groups including the American Apparel & Footwear Association opposed the initial bill and it took months to redraft a version that had their support, or that the fashion industry does not lobby regularly, so has less authority in Washington than other industries.

“This is a case that the industry is asking for something that they want, without really thinking about the benefits to the wider economy,” says Professor Christopher Sprigman, professor of law at New York University School of Law, who opposed the DPPA, on the grounds that copying benefits designers by creating “a powerful incentive in the fashion industry to invent new things.”

It’s important not to overstate the amount of lobbying going on in fashion, but it can be difficult to know how much that is. Fashion and luxury companies are generally very discreet about lobbying — in part, because of the negative connotations of corporate influence in government.

In the US, there are concerns that companies who lobby can influence by donating to political campaigns. Philip Knight, Nike’s co-founder, has made donations to Democratic Senator Ron Wyden, a key supporter of giving Obama "fast-track" authority to negotiate the TPP, and gave more than $85,000 to Republican congressional committees in 2013 and 2014, according to federal records.

While there’s no cap on lobbying expenditure — such as hiring staff, or travel expenses — there is a $2,700 cap on political donations to individuals. “The loophole is that you can give very substantial amounts to political action committees and to lobbying groups, who may support politicians and do political advertising of their own,” explains Scafidi.

“I think it is more of a perception issue than a real issue,” says the USFIA’s Julia Hughes. “Most companies do not have a political action committee and do not funnel contributions to Congress in an organised way. Political contributions are important, but it’s not what drives policy.” USFIA disbanded its own political action committee but “strongly encourages” members to donate.

Lobbying is not going away. Currently, luxury brands and stores are lobbying California lawmakers to uphold a legal exemption from a ban on importing crocodile skins, which lets them sell alligator skin goods. Meanwhile, Chinese e-commerce giant Alibaba is lobbying the US government to keep its websites off the list of “notorious” marketplaces that sell pirated goods.

The Trans-Atlantic Trade and Investment Partnership, a mammoth upcoming trade agreement between the EU and the US, has also seen fashion companies flocking to Washington and Brussels. According to meeting records published by the Corporate Europe Observatory, organisations including Ralph Lauren, LVMH, Levi's, Inditex and Ebay have already met with the European Commission’s trade department. More meetings are likely going on, unrecorded: according to Hughes, the USFIA is also “providing information to the negotiators and Congress on the views of our members.”