MUNICH, Germany — MyTheresa founders and co-chief executives Susanne and Christophe Botschen are back in the retail business. Over three years have passed since the partners sold their luxury boutique-turned-e-tail success story to Neiman Marcus Group for approximately €150 million, since which they have been on a contractually obligated break from the industry — watching and preparing for their next move.

“I probably would have started the next day if I hadn’t been forced to hold back and sit tight,” says Susanne, who first opened Theresa as a physical boutique in Munich with her husband in 1987, expanding into e-commerce in 2006. “But in retrospect, it was a good time for making up our minds and getting our heads clear.” And a good time to observe the fast-growing, but crowded and competitive luxury e-commerce market, expected to account for 25 percent of luxury sales by 2025, according to Bain & Company.

For Susanne, the growing selection of luxury goods available online is overwhelming. “[Large e-tailers] buy every style in every version and colorway to fulfill their enormous buying budgets. And the customer has to really dig deep. We know people lose interest after the second page.” The Botschens’ solution? A site dedicated to high-end footwear for women called Martha Louisa, set to launch in March with an approachable, playful and feminine design. Think: lots of pink. “Online, now the time is ready for specialists,” says Christophe. 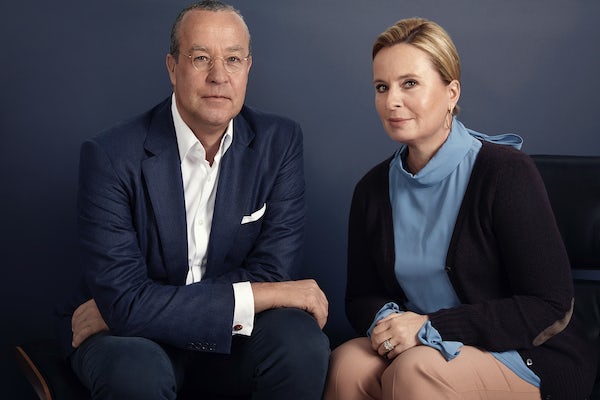 Footwear is the fastest growing luxury category online, up 10 percent to €18 billion in 2017, according to Bain. And yet there are few specialist footwear sites. Yoox Net-a-Porter Group’s Shoescribe closed in 2015 when the company shut down Yoox’s full-price businesses following its merger with Net-a-Porter. (The operation was sold to Italian retail group Tony in November with plans to relaunch this year).

But despite the apparent gap in the market, the barriers to entering the luxury e-commerce businesses are high. Setting up a system that manages inventory and ships internationally quickly and accurately is a logistical challenge that is difficult and expensive to scale. Customer acquisition is also costly and time consuming.

Martha Louisa’s wholesale model has advantages and disadvantages. While wholesale business are better able to curate their product selection and control end-to-end customer experience, they take on significant inventory risk and have high working capital requirements. The model is also coming under increased pressure as brands focus on their direct-to-consumer channels and platform players like Farfetch, which take a commission on sales without buying and holding inventory, grow market share. “We are not intending to invent a new wheel,” explains Christophe. Of course, the Botschens have already proven the approach can work.

Nonetheless, securing the right brand partners was a challenge. So before finalising their decision to launch Martha Louisa, the Botschens went on a “road show” to test the concept with former vendors, which included Prada, Miu Miu, Gucci and Saint Laurent. While the concept was well received, the founders say restarting these relationships would probably not have been possible without their track record. Balenciaga, Aquazzura, Bottega Veneta, Dolce & Gabbana, Fendi, Gianvito Rossi, Valentino, Proenza Schouler, Salvatore Ferragamo and Stella McCartney have also come on board.

“Many big major brands are over distributed online already, so it is a miracle we got them authorised again,” says Christophe. “They know that we always respected pricing, sales, their DNA — there is a trust that we have built,” adds Susanne.

“Susanne and Christophe were one of my first European clients with MyTheresa when I launched Aquazzura,” says Edgardo Osorio, founder of Aquazzura. “With Martha Louisa, I think they are bringing a different online concept, in a market that has so much growth potential.”

As for Martha Louisa’s edit, Susanne focused on “the best styles in their best versions” that represent the distinctive qualities of each brand. “People are looking for occasion-driven merchandise,” she says. Martha Louisa will also feature smaller names from the industry, such as Aeyde, Brother Vellies, Le Monde Beryl, Marais USA, Trademark, Vibi Veneza and many more. MR by Man Repeller, the line from Man Repeller founder Leandra Medine, is producing a special capsule collection for the site. “[These emerging brands] are kind of scattered around e-commerce businesses around the world, but no one has them under one roof,” says Susanne.

Yet the Botschens certainly have their work cut out for them. "We know what we have to do; we did it once and I know times have changed, but still the requirements are more or less the same,” says Christophe. “We are nothing but retailers at the end of the day,” adds Susanne.