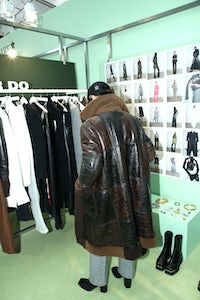 Designer Peter Do, who prefers not to have his face photographed, at the LVMH Prize 2020 presentation | Source: Bertrand Rindoff Petroff/Getty Images For LVMH
Luxury
Share
1 Comment
BoF Professional Exclusive
By Chantal Fernandez September 16, 2020 05:30

NEW YORK, United States — Peter Do likes the word no.

No, he won’t be staging a runway show this September. No, he won’t design more than two seasons per year and no, he won’t expand into new categories before he’s ready.

It’s a guiding principle that has served the designer, who worked under Phoebe Philo at Céline, well in the close to three years since founding his namesake ready-to-wear line with four co-founders — two he met on Tumblr and two he met at fashion school.

The luxury womenswear line, produced in New York’s garment district, incorporates menswear tailoring techniques and utilises unlikely materials like technical organza, most of which is developed by the designer and his team. The label generated more than $500,000 in sales its first season, and has found supporters both inside the industry (Peter Do was a finalist for the LVMH Prize and nominated for the CFDA Award for emerging designer in 2020) and beyond, frequently praised by fashion fanatics on social media. 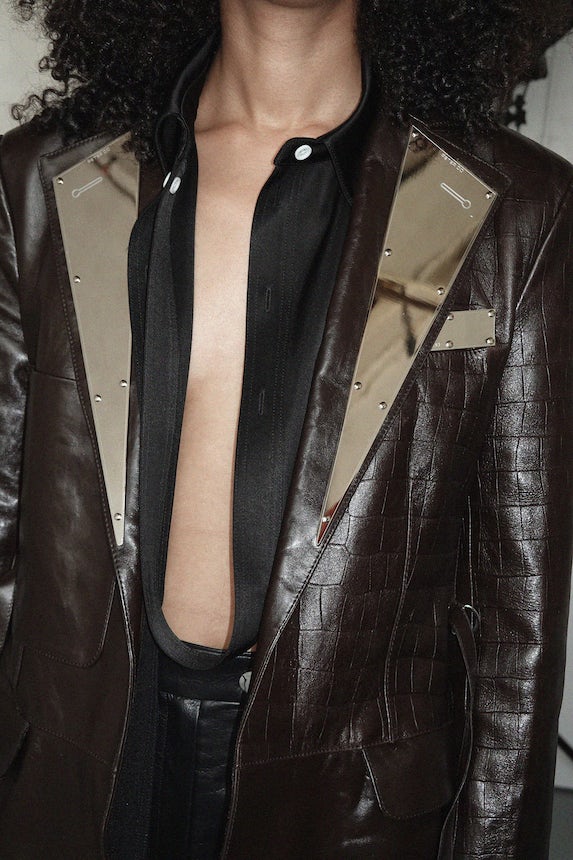 “There's no ladder here to climb,” Do, 29, said in a Zoom interview from his studio in Industry City, Brooklyn on Monday, surrounded by racks of clothing hanging from the ceiling. “There’s no hierarchy structure yet, where… you have to be really mean, or this ‘fashion person’ to get work done. All those things are in the past, honestly.”

The fashion business is always looking forward to the next trend and the next season, but emerging luxury designers tend to stick to a business plan that hasn’t changed all that much since the dawn of the Instagram era: stage expensive runway shows, bend over backwards to secure influential wholesale partners and hire powerful PR agencies to create the next great luxury brand.

That model was rusty even before the pandemic, which has forced sweeping changes throughout the industry, from a mostly virtual New York Fashion Week to the closure of multi-brand retailers like Jeffrey and Need Supply. Brands are reconsidering the need for runway shows and department stores. A new ethos is emerging among New York designers, centred around profitability rather than growth at all costs, and where selling fewer products to consumers via direct channels is preferable to securing a distribution deal with a cash-strapped retailer.

Do’s rapid rise makes for a compelling case that a new approach can work, even for an American luxury indie brand.

“I don't look at the big guns like LVMH and Kering, and compare ourselves to [them],” Do said. “We feel very content with doing what we want and just enough.”

It can be easy to forget that Do is even part of the New York fashion scene. The designer rarely participates in industry events and has made it a habit not to have his face photographed by the press or on Instagram. He described the brand as a start-up, where job titles do not define responsibilities and everyone wears multiple hats, including pitching in with labelling and packing as the office doubles as the warehouse. The design team also manages the social media content and Do still logs on to Instagram every day to respond to customers on the brand’s account, while press director Wu helps with order fulfilment.

“This new culture of celebrity designers — I see it happening and it was never something that I wanted to become,” he said, citing “discreet” designers like Martin Margiela, Helmut Lang and Rei Kawakubo as heroes. “It’s very dated to have this designer at the helm and deciding everything and everyone worships him or her… Everyone knows it takes a village.”

Do grew up in Vietnam, moved to the US as a teenager and graduated from the FIT in 2014. His collection won the year’s LVMH Graduates Prize, which came with a one-year contract with Céline. Do worked and trained under Philo for two years, travelling between the LVMH luxury brand’s London and Paris studios. In 2016, he moved back to New York and worked at Derek Lam while he prepared to launch his namesake label. His co-founders in the business, funded by friends and family, include designer An Nguyen and Sales Director Vincent Ho, both of which he met on Tumblr, and Operations Director Lydia Sukato and Press Director Jessica Wu, who Do met at Pratt Institute and the Fashion Institute of Technology, respectively.

While Do said he felt more comfortable in Paris by that point, he started the brand in New York because his friends and co-founders were here, and because he wanted to produce locally where he could keep a close eye on every part of the process.

I don't look at the big guns like LVMH and Kering, and compare ourselves to [them].

“There's a certain level of trust in our partnership that we've built over the past two, three years with us and the local factories,” he said. “I’m not saying New York is easy. There are challenges that we go through all the time. But when people see our product in the store, no one ever questions the quality.”

For Autumn/Winter 2020, the brand set a limit of 40 global wholesale accounts, which include Net-a-Porter and Dover Street Market Ginza, in order to keep production in New York, with existing factory partners and at a quality level that satisfies Do and the team. (Footwear is produced in Italy.)

“[The factories] grow with us, but there's also a certain cap that we have to stop every season,” Do said. “Let’s say this blazer, we can only make 200 blazers. So that's it.”

The brand is also exclusive due to its price point, which can be as high as $1,900 for a pair of leather-trimmed tweed pants or $1,290 for a sweater that mimics Do’s distinctive tattoo, a thin black line from his ear to his wrist. 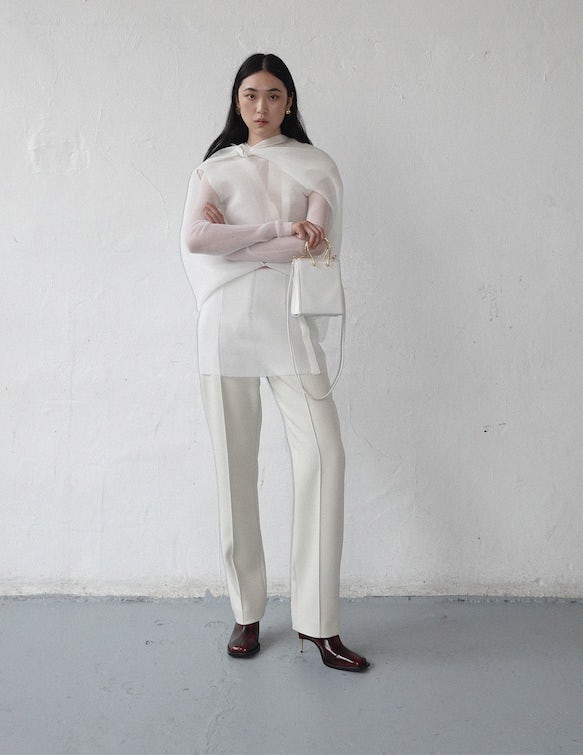 A look from Peter Do Spring 2021| Source: Courtesy

Online, Peter Do also has a direct e-commerce business that makes up 10 percent of total sales, where customers can pre-order runway pieces and buy made-to-order suits — a service it has offered since launch in February 2018, with its first collection for Spring 2019. And as of Autumn/Winter 2020, the brand bought stock for its own site for the first time, too, including its first collection of shoes, which sold out before they arrived.

Production challenges became more complicated this year, as the pandemic lockdowns shut down factories in the US and Italy for about three months in the spring.

While many other brands were in the process of selling their Autumn collections to buyers when lockdowns hit in the US and Europe, Do’s orders for the season were already set because the brand operates ahead of the traditional fashion schedule. The reason is a practical one, he said: factories have more time and attention to dedicate to manufacturing its collections before other brands begin producing their main seasonal collections.

Before the pandemic, Do and his team made it a habit to present each collection in Paris during the menswear shows, when many international buyers coalesce in the city. Other American brands, including Proenza Schouler and Rodarte, have experimented similarly in recent years.

“All the stores go to Paris and we only have one budget to do one thing,” Do said.

For Spring 2021, in lieu of setting up a showroom in Paris for buyers, Do and his team got as close as they’ve come to a runway show. In mid-August, they released a video of models in the collection on Instagram TV, filmed inside a large, social distancing-friendly Brooklyn warehouse.

“It was a new format that we've been thinking about for a long time,” said Do. “It’s something that you can’t replace with just a lookbook image.”

Do still isn’t interested in staging a runway show, though it’s not a hard rule. 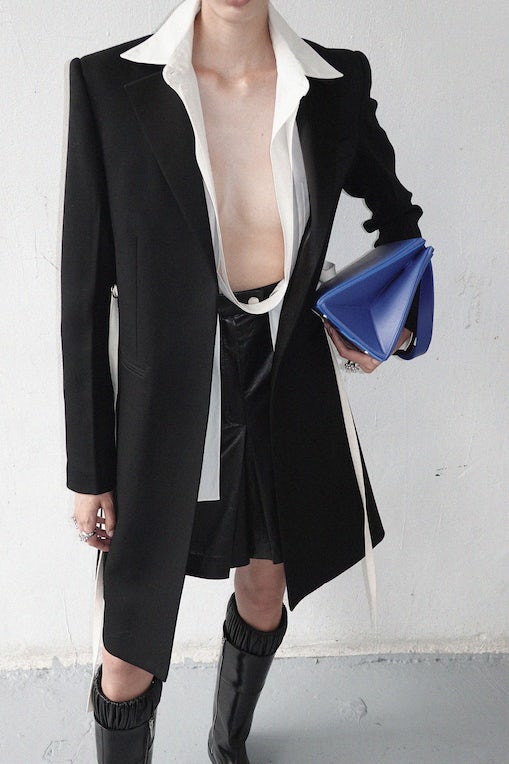 “I just think that not every collection needs a runway,” he said, adding that there are other forms of storytelling he wants to explore. A runway show might be in the brand’s future, once it feels right for the collection, he said, wary that “once you start, you can’t really stop.”

The video and a virtual showroom website were well received by buyers, Do said, and the brand hit a new record of orders for the season.

Wholesale partners, with their global reach and ability to mix Do’s pieces in with other brands, remain key for the business (a few of Do’s stockists went out of business this year). And despite the increase in discounts, especially online, Do does not match those prices on the brand’s website, where pieces remain available for purchase for multiple seasons and are not labelled as coming from certain collections.

But Do and his team have strict guidelines for wholesalers, like not creating exclusive pieces or collections unless the brand wants to, and only working with stores that are willing to carry a wide assortment from a collection.

For example, he won’t allow the label to be rushed with something like adding a footwear collection of combat boots and oxfords, which he and designer Nguyen started working on a year and a half ago. The timing for launch never felt quite right until Autumn 2020.

“There’s no calendar,” he said, laughing. “There is, but I don’t follow it in a way. We have a big calendar in the studio and there are certain deadlines that we have to meet but… it still feels very organic, which is what I enjoy about having a small team and a small company where decisions are made… with a human aspect to it.”

It goes back to the type of workplace culture he sought to create, in contrast to what he experienced at established luxury houses. He describes the Do culture as a family or collective that frequently cooks group meals together. He said no one on the team is jaded, or bound by previous ways of working.

Do is wary of growing too fast, and would rather keep his independence and flexibility than make more money for money’s sake.

“I don't want to be in every department store, that's not the goal,” he said. “My dream is still to be free to create work that we love.” Do is “terrified” of the company becoming too big to hold onto the scrappy, family culture it has now. “I'm trying to hold on to this moment for as long as I can,” he said.