Following Trump's appearance at the opening of a new Louis Vuitton factory in Texas, the house’s women’s artistic director took to Instagram to condemn the US president.

PARIS, France — Louis Vuitton designer Nicolas Ghesquière has made it clear he wants nothing to do with Donald Trump.

“Standing against any political action. I am a fashion designer refusing this association #trumpisajoke #homophobia,” he wrote.

Paco Rabanne Creative Director Julien Dossena, Out Magazine editor-in-chief Phillip Picardi, makeup artist James Kaliardos, Veronika Heilbrunner, former Elle UK editor-in-chief Anne-Marie Curtis and stylist Rebecca Corbin-Murray were among others who took to the comments section to show their support of the designer. Model Teddy Quinlivan commented, “BRAVO Thank you for standing on the right side of history ❤❤.” 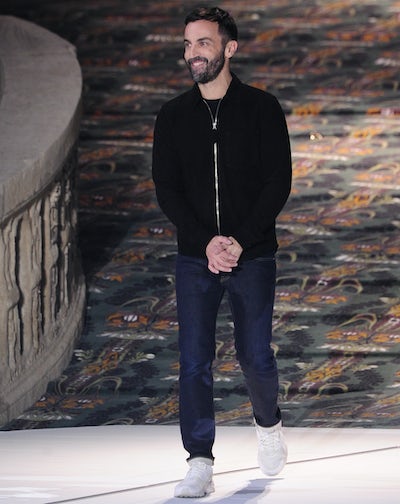 Louis Vuitton is LVMH’s flagship fashion label, estimated to generate €12 billion a year in sales. The new factory opening came as part of a commitment to create 1,000 jobs in the US over the next five years. The initial investment will cost LVMH $50 million.

Ghesquière is not the only one to take issue with the luxury brand’s Trump association. Thursday’s highly publicised event sparked backlash on social media, while Grab Your Wallet, a group that calls on shoppers to boycott businesses associated with the Trump family and administration, added LVMH to its blacklist.

“Creating jobs is not an excuse to ignore morally repugnant behaviour,” Shannon Coulter, one of the movement’s founders told BoF earlier this week. “Businesses are willing to look the other way in order to work with the Trump administration, but it’s a worrisome trend.”