The capsule line, titled 'For All,' sees Off-White launch T-shirts and hoodies designed to heighten brand appeal among Millennial shoppers.

MILAN, Italy — Off-White has launched a “more affordable” capsule collection. Called "For All,"  the unisex line — which will be available from today onwards at all 11 Off-White stores around the world, including those in New York, Hong Kong and Sydney — includes four graphic T-shirts ($95) and four hoodies ($170) decked out in the popular streetwear-inflected fashion label’s signature black and white diagonal stripes and quotation marks. In comparison, T-shirts for Off-White retail between $300 and $580, with hoodies reaching $800.

“The price tier allows for a new customer to see themselves within the overall concept of the fashion label,” says Virgil Abloh, who founded Off-White in 2013 and today serves as the brand’s creative director, operating its Milan-based studio. “Off-White can be luxury at a traditional luxury price point, or equally it can be relevant at an affordable price point," adds the designers, who went on to say that limiting yourself to one specific price-point is old-fashioned in this day and age. 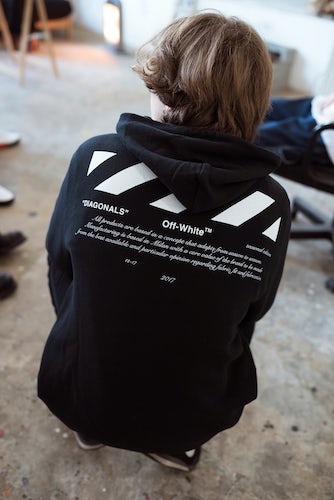 Democratising his work has been something Abloh has focussed on over the past two years. In July 2017, the 37-year-old architecture student-turned-polymathic creative collaborated with Warby Parker on an eyewear line; this was followed by a major partnership with Nike the month after. A highly anticipated “affordable” partnership targeted towards Millennials with Swedish furniture giant Ikea is set to follow later this year.

The designer’s resonance with Millennials through social media, combined with his strategy of collaborating with a wide array of brands — both inside and outside of the fashion industry — is paying off. Since its launch, Off-White has generated triple-digit growth year-on-year and shows little sign of slowing down any time soon (the company, which falls under the umbrella of Milan-based production and distribution company The New Guards Group, declined to disclose sales revenue).