PARIS, France — LVMH will present its first collection for Patou on Wednesday under the artistic direction of Guillaume Henry, as the conglomerate looks to breathe new life into the iconic Parisian maison that holds little recognition for today’s luxury consumer.

“We are waking it up gently,” Henry said of the brand which was founded in 1914 by Jean Patou, considered in his day as the main rival of Gabrielle “Coco” Chanel. Former Carven and Nina Ricci Creative Director, Henry was handpicked by Sidney Toledano in September 2018 to resurrect Jean Patou with LVMH’s backing. The house has been helmed by the likes of Karl Lagerfeld, Jean Paul Gaultier and Christian Lacroix in its over 100-year history.

Henry’s collection is the label’s first in 30 years. Reimagining the name for a generation who will not have heard of the couturier is a challenge Henry and Chief Executive Sophie Brocart were excited to embrace. Their first step was to rebrand the house as simply "Patou."

"The idea is to put Patou at the heart of French fashion by expressing a certain sense of Parisian elegance and the pleasure of dressing, in the spirit of innovation faithful to the Patou of the 1920s," said Brocart.

“We cannot talk to this generation that doesn't know Jean Patou about Suzanne Lenglen for example," said Henry, referring to the French tennis champion and muse of Patou. Rather than relying heavily on the archives, Henry and his team have focused on the values of the house — elegance, energy, joyfulness and friendliness — to ensure the collections are relevant for today.

The first looks will hit stores in November, coinciding with the launch of Patou's e-commerce site (the brand will also be available on LVMH's multi-brand platform 24S). Dresses retail on average at around €600, pants at €400 and jewellery pieces at around €300.

Patou sits within LVMH’s Fashion group, alongside Rihanna's Fenty, another new venture launched by the luxury giant this year with the star. Unlike Fenty, which sells exclusively online and in popup stores, Patou will also rely on its wholesale partners. “We need to go out and meet our customers. [Patou] does not have the notoriety of Rihanna,” said Brocart.

The brand won’t follow traditional seasons, releasing designs in drops as “seasonal fruits.” "What we do is 'need-now, buy-now,'" said Brocart. “In the collection we are presenting, there is both a sequence for winter and a sequence for spring that buyers can buy.”

According to Henry, Jean Patou “was attuned to the needs of women around him, especially his sister Madeleine. Similarly, the best ambassadors for Patou are our coworkers. They are a good indicator for me when it comes to the price point and seasonality. And none of them buy coats in June.” Henry has used friends and Patou employees in June’s pre-collection visual assets. 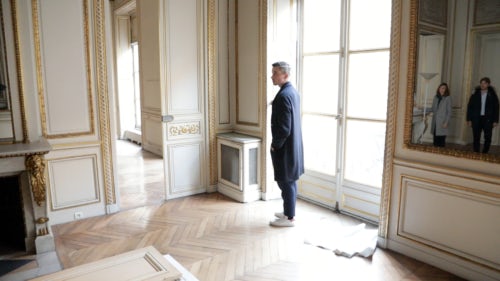 A still from the new Patou documentary | Source: Courtesy

To coincide with the relaunch, Henry and Brocart tapped director Hugues Lawson-Body to capture both the revival of the fashion house and the birth of a startup company for a 60-minute long documentary, funded by the house, set for release on an online platform this autumn.

“It was not meant to be a documentary, just an emotional object. We just wanted to capture these moments because they are very special in a professional life,” Henry explained.

“Hugues was there for all the important moments, the first fitting, casting, the visit of Patou’s historic atelier and shop on Rue Saint Florentin,” Henry said. (Lawson-Body will shoot the presentation on Wednesday to add to the final film.)

Patou board members Nikita and Akash Mehta, who invested in the brand alongside LVMH, are bullish on the future of the house. "'Evolution, not revolution is my motto,' Jean Patou liked to say," the Mehta siblings said in a statement. "Having both studied the heritage for the past eight years, Patou success clearly came from being in the moment. As we both like to say, the future is now. With the new team, leadership and name we’re truly excited for what’s to come with Patou.”