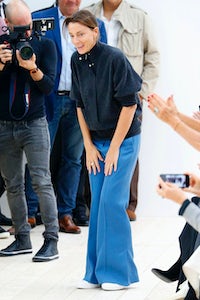 PARIS, France — LVMH is interviewing designers to replace Céline creative director Phoebe Philo and rebuild the design team in preparation for her eventual departure from the French fashion brand, several industry sources in Paris and London with knowledge of the matter have said.

“The interviews have been going on for a few months now,” one of the sources said on condition of anonymity. Yet LVMH vehemently denied Philo was about to leave the brand: “We categorically deny any imminent departure of Phoebe Philo from Céline,” a spokesman for LVMH said. Renewed speculation that Philo would leave already prompted the luxury group to publish an internal memo earlier this year saying the designer remained committed to the brand. But LVMH did not deny that interviews for a replacement were taking place.

Another source with knowledge of the situation said Philo was expected to leave by the end of the year and the terms of her departure had been agreed before the summer. “It smells like the end of an epoch,” one headhunting source said on condition of anonymity.

Since joining Céline in 2008 after a three-year hiatus to focus on her family, Philo turned the underperforming label into a fashion authority with her minimalist designs. Philo, a graduate from London’s Central Saint Martins, was behind many of Céline’s hit bags. Over the past decade, she helped lift the label’s annual sales from €200 million to more than €700 million, according to analysts. (LVMH does not break out figures for Céline).

But if Céline is one of LVMH’s most successful fashion brands, under Philo, one of fashion’s last techno-refuseniks, it has also been a digital laggard. The label only launched an Instagram account earlier this year, long after competitors. At a time when e-commerce is one of the most significant growth opportunities in a slow luxury market — in the next 10 years, McKinsey & Company expects the share of luxury sales occurring online to triple, making e-commerce the world’s third largest luxury market after China and the US — Céline has yet to embrace online sales.

The brand is thought to finally be launching e-commerce later this year under new chief executive Severine Merle, who arrived in April, replacing Marco Gobbetti, who left to take the helm at British megabrand Burberry. Previously, Merle was the deputy of Berluti chief executive Antoine Arnault and, before that, general director of Louis Vuitton France. Philo’s departure is expected to help boost Céline’s digital growth.

Philo studied with Stella McCartney and followed her when she took the creative director job from Karl Lagerfeld at Chloé in 1997. When McCartney left Chloé to set up her own fashion brand in a joint-venture with what was then called Gucci Group, now part of the conglomerate Kering, Philo was left out of the project and then CEO Ralph Toledano exploited the rift to place her in the top job in 2001. Philo left five years later having significantly boosted Chloé’s sales revenues. Philo is part of an entire generation of young female designers who earned their first stripes at Chloé, including McCartney, Hannah MacGibbon, Clare Waight Keller and now Natacha Ramsay-Levi, who presented her first collection at Paris Fashion Week last month to much media acclaim.

Birthed in 1945 by Céline Vipiana as a children’s shoe brand, Céline later expanded into women’s ready-to-wear and accessories, and was integrated into LVMH in 1996 under the watch of chairman Bernard Arnault. The label is often cited as an example of the investor patience required to revive a luxury fashion brand. Though Céline enjoyed a short period of success under the designer Michael Kors, who led the brand’s creative direction between 1997 and 2004, it never really took off until after Philo joined in 2008.

After roughly ten years at Céline, the designer has clocked up a tenure that’s much longer than many others who have cycled in and out of fashion houses at a rapid clip, with some lasting less than a year. But following several blockbuster years, Céline’s growth rate has slowed and Philo may be ready for her next move.