MILAN, Italy — After months of speculation, Raf Simons is joining the house of Prada.

The cerebral Belgian designer — who has previously designed for Jil Sander, Christian Dior and Calvin Klein — will take up the role of co-creative director, working alongside Miuccia Prada with equal responsibilities for creative decision-making, an unconventional configuration. The appointment is effective April 2, 2020. Their first show as co-creative directors will be Spring/Summer 2021 womenswear, presented in Milan in September.

Simons, who will continue to design his namesake menswear label, is the first major design talent from outside the Prada family to join the house since its inception. In 1978, Miuccia Prada inherited the label as a luggage maker and transformed it into a global fashion brand with her creative designs, beginning with the launch of the company’s first successful handbag design — rendered in black nylon — in 1985, and a ready-to-wear offering launched in 1989.

Since Simons abruptly exited Calvin Klein, where he was chief creative officer, in December 2018, he has focused on his menswear line, but rumours of his possible involvement with Prada picked up steam in recent months.

“Prada is a brand that I have been interested in my whole life. I cannot wait to express to all of you the dialogue I will have with Mrs Prada and her team,” Simons said at a secretive conference for select press held at the company’s headquarters to announce the news — two days after Prada’s last solo show for the brand. “To be really honest, Mr Bertelli approached me right after my exit from Calvin Klein,” Simons continued. “Miuccia and I had a conversation about creativity in today’s fashion system. And it brought me to open dialogue with many designers, not just Mrs Prada. We have to re-look at how creativity can evolve in today’s fashion system.”

We have to re-look at how creativity can evolve in today’s fashion system.

Simons is one of the most influential designers in the industry and already has a relationship with the Prada Group. Miuccia Prada and Patrizio Bertelli hired Simons as creative director of Jil Sander in 2005 when they still controlled the brand and were looking for someone to fill the shoes of the namesake designer. Simons’ seven-year tenure at the brand was a critical and commercial success, and the Prada Group sold it to a London private equity firm in 2006.

“We’ve known Raf Simons for a very long time — back in 2005 when I first went to meet him in Antwerp,” said Bertelli. “Besides being engaged in fashion... it’s not just a professional relationship it’s a human relationship we share.” 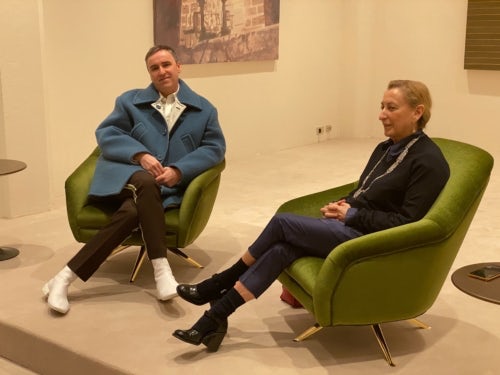 Raf Simons and Miuccia Prada at a press conference to announce the news| Image: BoF

Simons has described Miuccia Prada as a “true pioneer” in fashion and acknowledged her influence on his work. “On all levels, I can sense Miuccia’s very clear vision, her mindset, her view of the world, her view of art, her political opinions,” said Simons in a 2016 interview with Prada for System magazine. “And as one person she is able to construct and share that on such a huge scale. I find that mind-blowing.”

Prada returned the appreciation in the same interview. “Sometimes I think I’ve had a fantastic idea, and Olivier, who works with me and Fabio on shows and knows Raf’s work so well, says to me, ‘Miuccia, Raf already did that before,’” she said. The two have a deep shared appreciation for contemporary art.

Simons’ long-time right-hand Pieter Mulier will not accompany the designer in his new position. Mulier posted his congratulations to Instagram, adding: “Good luck with this next big step… strange not to be on your side but will [be your] biggest fan!”

As for whether Simons’ appointment amounts to a retirement plan for Miuccia Prada, the namesake designer said, with a chuckle: “Absolutely not. I like working, and I’m very excited and this will bring new wind. Please don’t make me older than I am.”

But asked about the length of the contract with Simons, Prada signalled that it could theoretically last for life: “In theory, it’s forever.” Indeed, the arrival of Simons and the perpetual nature of his contract sets up the possibility of a smooth passing of the creative torch sometime down the road, a seemingly smart move to secure the future of the brand.

For the meantime, the duo cast the appointment as a bid to strengthen the role of creativity within the fashion business, which Simons said was under threat. “I think lots of creatives… feel troubled, feel that the fashion industry is moving more and more towards an industry that might end up excluding creatives,” he said, noting that, today, plenty of large-scale fashion businesses thrive without roots in genuine creative output. “[Miuccia and I] question if our cooperation can be strengthening or focusing on creativity again, that should ultimately lead the business.”

Simons joins Prada as the brand faces challenges on the business side of the company. Prada, the brand, is much stronger than its current sales would indicate. The company, which is listed on the Hong Kong stock exchange, has long been a critical favourite and a powerful name with consumers, but a series of strategic missteps have put Prada squarely behind its peers, from errors in pricing strategy to Prada’s lateness to e-commerce and the sneaker boom.

Prada, which also owns Miu Miu and Church’s, has course-corrected its financial results, which lag behind its peers. Prada Group reported net revenues of €1.57 billion in the first half of 2019, flat year-over-year, though EBITDA was up, reaching €491 million (up from €271 million in H1 of 2018), with the company reporting a reduction in retail markdowns, improved wholesale accounts and additional digital investment. Full year results are expected next month.

For years, Prada and Bertelli appeared not to have a succession plan in place, spurring rumours of a potential takeover as the luxury industry consolidated under the umbrellas of the ‘big three’ conglomerates LVMH, Kering and Richemont. But in September 2018, they brought their son Lorenzo Bertelli into the company as head of digital communication, seemingly signalling their intention to keep the business in the family (today’s news underscores this).

Nonetheless, speculation again picked up when, in October 2019, Miuccia Prada ceded control of four Prada stores in Milan — including its first-ever location, opened in 1913 — to the Prada Group for €66 million, a sign to some that the company was readying for a sale, as any potential acquirer would surely want these valuable assets. At the time, the group said the move was “an important step in further developing and extending the group’s brand identity,” denying that the company was for sale.

It may yet make sense for Prada to, one day, sell to a major conglomerate like Kering or LVMH, whose sheer scale gives them major advantages in talent, advertising and real estate. But in the short-term, at least, a sale seems unlikely. The business is deeply personal to Prada and Bertelli, who together own 80 percent of the group and face no real pressure to sell. What’s more, the company’s share price is currently far from its peak, down 35 percent over the last five years.

The Path to a Better Prada

Does a Prada Sale Make Sense?