MILAN, Italy — When that flat red line flashed across the runway last February, every Prada fan’s heart beat a little faster. Linea Rossa, the technically driven line recognisable for its red logo and casually known as Prada Sport, was back in earnest. And for the first time, designer Miuccia Prada chose to style the Linea Rossa, which was de-emphasised by the company in the mid-2000s — relegated mostly to eyewear and basic items — with her latest ready-to-wear collection. It was a nod to the explosion of streetwear and the flattening force of smartphones and the Instagram feed, which blends haute couture, ready-to-wear and streetwear together in the minds of consumers.

This season marks the new Linea Rossa’s retail debut. Those blindingly bright neon puffers from the Autumn/Winter 2018 collection and more will be sold in select Prada stores, department stores and online alongside the line’s signature novelty prints and lady bags.

Prada is touting the sophisticated technicality of the range: nanotech fabrics regulate body temperature; padding on puffers is made, in part, of a substance derived from graphite; nylon is glazed in the thinnest membrane in the world to fend off abrasions. They’re anti-wind, waterproof, breathable — and utterly captivating.

“Linea Rossa’s identity is the perfect expression of several essential elements of the Prada DNA,” co-chief executive Patrizio Bertelli told BoF. (He runs the business with his wife, the designer Miuccia Prada, whose family founded it as a luggage maker in 1913.) “The attitude to introduce fabrics, such as nylon — and refinements typically belonging to sportswear — into the everyday formal wardrobe embodies Prada’s unconventional spirit.” 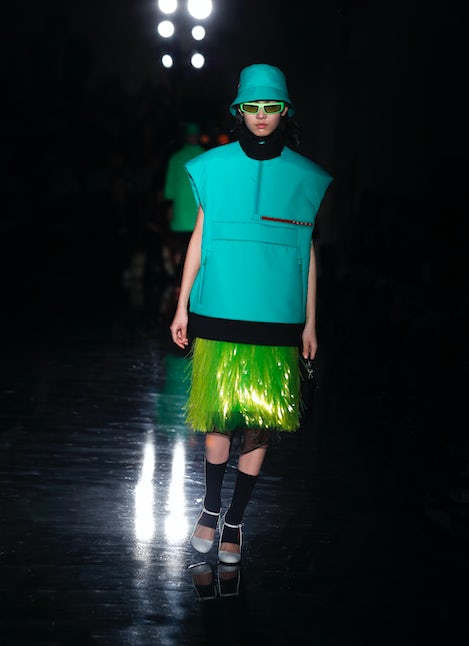 Analysts are pleased. Many say the decision to pull back on the more affordable, technically driven line amid the mid-aughts rise of athleisure was a mistake that hurt the business. Prada is one of the few fashion houses as respected for its mastery of technical materials as its creativity: Linea Rossa served to underscore this. Plus, while Miuccia Prada’s ready-to-wear offered a dream that was inaccessible to most, Linea Rossa was more affordable, supporting the brand’s position a notch below top-end players like Hermès and Chanel.

Nylon styles used to represent 20 percent of the house’s total bag sales, but when Prada tried to move upmarket, raising its handbag prices in a bid for wider margins, it threw off the company’s pricing architecture. And although Miuccia Prada’s runway designs continued to compel industry onlookers, the company’s commercial collections missed the mark, turning off consumers by generic handbag silhouettes and shoe shapes. At the same time, accessible luxury brands like Michael Kors began eating into Prada’s market share.

“The product innovation was not so strong, and so they lost market share to their competitors,” said Mario Ortelli, managing director of Ortelli & Co, an advisory firm. The company was also slow to the digital opportunity and embarked on an untimely retail expansion as luxury peers were growing online sales.

And in the sports space vacated by Linea Rossa came the likes of Lululemon and Moncler. “They neglected the space that they owned, and that was a mistake when you think about the urbanisation of luxury,” said John Guy, an analyst at Mainfirst AG.

They neglected the space that they owned, and that was a mistake when you think about the urbanisation of luxury.

Sales suffered. In its 2016 fiscal year, net sales at the Prada Group — which also includes sister label Miu Miu and Church’s shoes — were about €3.2 billion, down 9 percent (at constant exchange rates) from the year before. (Prada accounts for more than 80 percent of the group’s overall sales).

Yet all was not lost. Thanks to a rush of 90s nostalgia rife with “Gat”taca references and ripstop nylon, Prada was flung back into the cultural conversation. Meme-makers Tony Liu and Lindsey Schuyler even named their knockoff-watching Instagram account Diet Prada in tribute to the originality — and genius — of the designer.

At some point, Prada caught on, and began incorporating more nylon (backpacks, bum bags) and sportif styles into its commercial collection. The on-trend Cloudbust “dad” sneaker, introduced in 2017, was a certified hit — if a little late to the game.

In the first half of the 2018 fiscal year, sales at the Prada Group were €1.5 billion, up more than 9 percent from the same period last year, beating analyst estimates. The Prada brand itself saw sales increase by 10 percent. Margins were wider across the board.

“We are confident that the disciplined execution of our straightforward strategy will unlock the full potential of our global retail network and will drive long sustainable growth,” Bertelli said. “In particular, investment in our products, brands and across our retail network, together with creativity and strengthened consumer engagement, will help us to build our development path on solid foundations.” 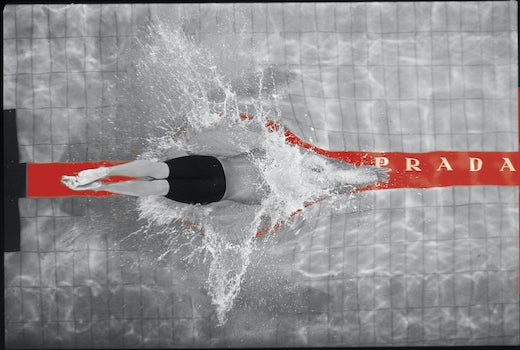 The revival of Linea Rossa is part of this process. And while the move is all but sure to resonate with fans of the brand, its impact on the overall business will take longer to measure. Nylon is less expensive than leather, but this time around prices are much higher than they once were. For instance, a nylon knapsack cost $570 in 2000; this season’s versions start at $990.

Relaunching Linea Rossa might just be the smartest thing Prada has done in a long time. However, recovery is far from guaranteed. While the company has introduced more compelling entry-level products and placed greater emphasis on its digital strategy, Prada has yet to establish a failsafe succession plan.

Bertelli said in June 2018 that the family will “never sell” the business, although the couple’s 30-year-old son, Lorenzo, who joined the firm in 2017 to head up digital communications, is still learning the ropes. “He’s very much unproven at this particular juncture,” Guy said. “I’m not sure that’s a significant step.”

Bertelli told BoF that while Lorenzo only joined the company a year ago, he has been kept up-to-date over the years on the group's activities across sectors. (While the relaunch of Linea Rossa did not fall under his direct purview, he played a role in developing communication strategy.) "So, if he wants, one day he will be able to take over," he said.

In the meantime, nothing is tougher than “capturing the interest and complexity of all consumer segments, particularly millennials and Generation Z,” Bertelli said. But generational change is only one dimension to the growing complexity of a luxury market that is more globalised and digitised than ever. Going up against conglomerate-backed powerhouses like Gucci and Louis Vuitton is becoming harder and harder.

“Prada is doing all the right things,” Ortelli said. “But sometimes you do everything right and there are competitors faster and with stronger brand momentum than you.”