The Swiss luxury conglomerate has failed to turn brands like Chloé and Dunhill into a soft-luxury empire that can take on Kering and LVMH. Can recent operational changes turn the tide?

The Swiss luxury conglomerate has failed to turn brands like Chloé and Dunhill into a soft-luxury empire that can take on Kering and LVMH. Can recent operational changes turn the tide?

PARIS, France — Over the past year, Compagnie Financière Richemont SA has made a series of strategic moves in a bid to shake up its struggling fashion business. But lacklustre results in the first half of its most recent fiscal year indicate the Swiss luxury conglomerate still has a long way to go before it can compete with rivals LVMH and Kering when it comes to soft luxury.

Richemont reported operating profit of €1.17 billion ($1.29 billion), below analyst expectations, as the market leader in watches and jewellery saw negative impact from the ongoing pro-democracy protests in Hong Kong. Net profit was down 61 percent in the period to €869 million.

Revenues in the segment which includes its fashion brands including Chloé, Dunhill and Alaïa, grew 1 percent in the period to €941 million, citing “mixed performance across the maisons.” (Richemont does not provide sales or profits of individual brands.) 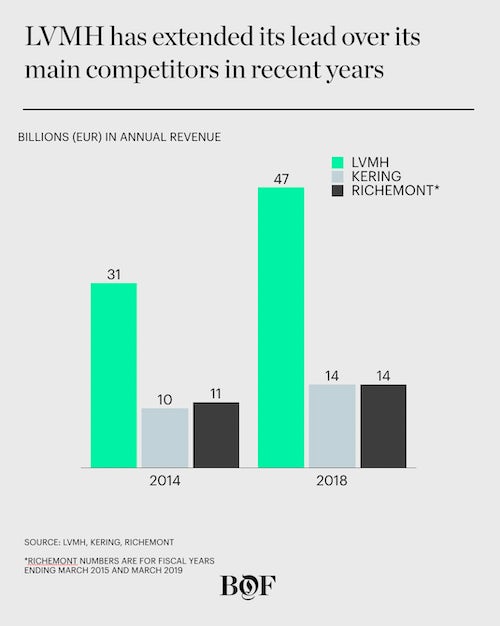 Analysts have speculated for years that Richemont may look to offload its remaining soft luxury brands, or that it would merge with Kering to take on the might of LVMH. And while Richemont’s value is little changed from where it was five years ago, LVMH’s market value has soared ahead, hitting the €200 billion mark this week.

“It has been a long time that investors have questioned the validity of the fashion businesses,” said luxury analyst Mario Ortelli.

And yet, Richemont remains committed to its soft luxury operations, underscored by a recent string of changes made at the group. Earlier this autumn Richemont’s head of fashion departed, and last week it announced that Chloé Chief Executive Geoffroy de la Bourdonnaye would leave the business: moves seen as part of a broader effort to boost Richemont's standing in the soft-luxury sector. Given that the group’s core competencies — jewellery and watches — have been threatened by macro trends (the decline of the watch business) and stiffer competition (especially if LVMH succeeds in its $14.5 million bid for Tiffany & Co.) a stronger fashion arm would take some of the heat off.

Below, BoF breaks down the current state of play at Richemont's fashion houses.

The conglomerate recently announced a joint venture with star designer Alber Elbaz, describing the project as “an innovative and dynamic start-up, meant to turn dreams into reality.” While the fashion industry awaits further details on the tie-up with anticipation, Richemont will have its work cut out for them to make it a financial success.

Launching a new fashion brand around a designer with no proven track record of attracting Gen-Z consumers is a risky and expensive proposition. Richemont’s expectations for the project seem to be contained. (The brand will be project-based and majority-owned by the conglomerate.) But, “it is unlikely that a start-up — even with a talented designer at the helm — can move the needle for Richemont’s fashion business,” Ortelli said.

Chloé, the largest and most relevant label in Richemont’s fashion portfolio, has felt the impact of two key departures this year: Eric Vallat as Richemont's head of fashion and accessories, and Geoffroy de la Bourdonnaye, who will be replaced as Chloé chief executive by former Maison Margiela CEO Riccardo Bellini. Richemont Chief Executive Jérôme Lambert described the management changes as “a key element for success,” adding on Friday's analyst call that Chloé “has [doubled] its turnover in less than five years.”

According to Morgan Stanley estimates, Chloé generated sales of €510 million —representing just 4 percent of Richemont’s group sales — in the fiscal year ending March 2019, although it was not profitable.

Natacha Ramsay-Levi, who joined Chloé as creative director in 2017 after a years-long partnership with Nicolas Ghesquière at Balenciaga and Louis Vuitton, has yet to produce a blockbuster accessory that would take the brand to the next level. Rumours have persisted she would soon exit the house, speculations the company denies.

It is unlikely that a start-up — even with a talented designer at the helm — can move the needle for Richemont’s fashion business.

“The identity of the collection under the creative leadership of Natacha Ramsay Levi is taking time to come across,” Ortelli said, also noting that Chloé is a gendered brand in an increasingly “gender fluid” market and at a time when it is hard for a mid-size fashion brand “to compete with the big gorillas in the room.” (Brands backed by the big fashion groups, LVMH and Kering, benefit from being able to tap into a vast retail real estate network — allowing them to scale their direct-to-consumer businesses faster — as well as bigger marketing budgets, which also aids in customer acquisition.)

One of Bellini’s first tasks will be to unlock the potential of Ramsay-Levi, whose current contract runs until March 2020, according to sources.

He will also be tasked with developing the brand’s accessories including leather goods, which currently account for approximately 60 percent of sales, as well as reduce its reliance on department stores. If Bellini can guide the label into stronger performances in key markets, “there is no denying that Chloé has good potential,” said Bernstein analyst Luca Solca.

The iconic label appointed Myriam Serrano as Chief Executive in September, but two years after the passing of the beloved designer, it has yet to articulate a plan for future growth, which will likely be rooted it its promising accessories business. Net sales were approximately €65 million in fiscal year 2017, according to Morgan Stanley estimates.

At some point, the company will also need to figure out how it plans to carry on creatively, whether that means hiring a new creative director to move the vision forward or continuing to rely on its vast archives for the time being.

British heritage label Dunhill's sales stood at €160 million in fiscal year 2019 and is likely unprofitable, according to Morgan Stanley Equity Analyst Edouard Aubin. Current Chief Executive Andrew Maag, who was brought in at the beginning of 2017 from Burberry, hired former Mark Weston as creative director, although his collections have yet to make significant headway on the menswear scene.

The real opportunity for Richemont’s fashion business could be in potential synergies with the group’s luxury e-commerce entity Yoox Net-a-Porter Group (YNAP). Lambert said that the first six months of the year have seen a further reinforcement of the link between YNAP and the rest of the group’s fashion activity.

Additional streamlining of the current portfolio after the shedding of Lancel last year seems unlikely, as do any further acquisitions. With LVMH soaring ahead of the competition, maybe a mega-merger between Kering and Richemont would be their best bet.

Kering and Richemont: Why a Mega-Merger Makes Sense