Ronald van der Kemp Builds a Brand His Own Way

The Dutch designer’s label RVDK is the standard-bearer for haute couture's art of glorious one-offs and flights of fancy, celebrating creativity, craft and an obsession with the unique. 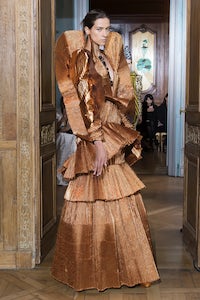 Ronald van der Kemp Builds a Brand His Own Way

The Dutch designer’s label RVDK is the standard-bearer for haute couture's art of glorious one-offs and flights of fancy, celebrating creativity, craft and an obsession with the unique.

PARIS, France — A while ago, Ronald van der Kemp was sitting in the bar at the NoMad on Broadway, sipping a margarita on the rocks. The drink suited his look: brawny, tanned, younger than his mid-fifty-something. In fact, in his Ohio State hoodie, he could have been a big old college boy. Which made it all the more incongruous and wonderful that the Dutch designer’s label RVDK is currently the standard-bearer for haute couture as the art of the glorious one-off, the flight of fancy that celebrates creativity, craft and an obsession with the unique.

A few weeks earlier, I’d sat through RVDK's last show in Paris with a friend, most definitely not in fashion, who was thoroughly seduced by the colour, the optimism, the subtle theatre of the interaction between the models and the audience, and the carefree sense that nothing we were looking at was contingent on saleability. My non-fashion friend felt that this was what fashion is. My reaction was a more seasoned (or cynical): “This is what fashion could be.”

What it once was, in fact, in the years that shaped Van Der Kemp’s sensibility, propped up in front of TV at home in Holland with his mum, watching a programme beamed in from Germany that captured the beauty of Yves Saint Laurent’s couture, the drama of Claude Montana’s shows, the peak moments of Mugler, Chantal Thomass, Anne Marie Barretta… “It was so different how shows were done then. The way the girls walked looks so weird now.” One reason Van Der Kemp wanted Anna Cleveland in his last show. Her Gothic vamping was straight out of her catwalk-icon mother Pat's playbook. 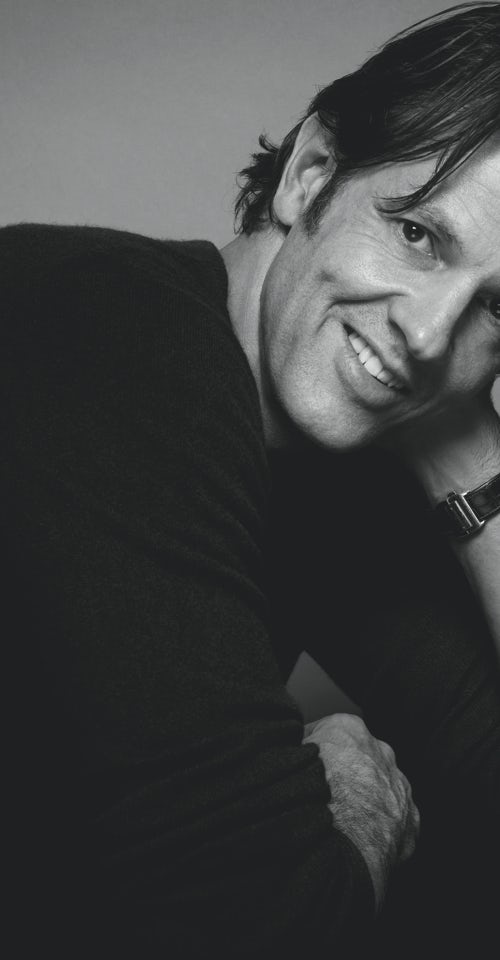 When Van Der Kemp followed Alber Elbaz at Guy Laroche in 1999, Cathy Horyn, then at the New York Times, commented that he made the kind of clothes that people who didn’t know anything about fashion would like.

If there was a barb in those words then, it’s an opinion that’s become something of a selling point. When Van Der Kemp shows his new collection, in Paris this week, he’ll be riding the wave of enthusiasm that usually accompanies a cult going overground. He loves the idea that people who aren’t into fashion can look at his clothes and feel there’s something different going on. Justin Bieber wore his women's jeans. Maybe it was his girlfriend Selena Gomez who turned him on to RVDK. She’s a fan. So are Lady Gaga and Katy Perry, Tracee Ellis Ross and Maye Musk. And Kate Moss, whose Instagram moment in RVDK's mashup of a black leather jacket and a coyote fur was a breakthrough of sorts for Van Der Kemp. “Building a brand my way,” he calls it.

His latest idiosyncratic exercise in “brand-building," debuting on the haute couture calendar in Paris this week, is called Wardrobe 7. Van Der Kemp prefers “wardrobes” to seasons. “It’s not like it’s over next time,” he says. “You keep it in your closet and pull it out. There is no seasonal principle. I make clothes, and they all come together at one point. I do the looks a couple of days before the show, and I never know exactly how it will turn out. It’s exciting and nervewracking, but that’s what I want.”

From the day in January 2015, when he launched RVDK with Wardrobe 1 in his college buddies Inez van Lamsweerde and Vinoodh Matadin’s Paris apartment, there has always been a highly original story to tell about the way he makes his clothes. He’s a packrat. Everywhere he goes, he accumulates things. At the beginning, he inherited the archive of Dutch couturier Frans Molenaar when he died. Then there were the exotic skins and offcuts he acquired from a handbag manufacturer in Italy. For Wardrobe 6, shown in July, he bought dead stock from a store in Lisbon, “leftovers, maybe from the 50s or the 80s.”

Brands make too much noise, people are waiting for the opposite, the whisper, not the scream. But you can see something happening.

Obviously, such randomness is scarcely what you’d call a good business model. “It didn’t start with the idea to build a company,” Van Der Kemp agrees. “I wanted to make clothes, see how I felt about it and other people felt. I knew I couldn’t produce anything. I was just looking for the quality.” So the first collection was strictly one-of-a-kind private sales. Purest couture. Second time round, Van Der Kemp struck an exclusive deal with Net-a-Porter. “There was a hand-embroidered cape. We couldn’t make more than one. They ordered 15.” A way had to be found. And it was. A little reach, a little imagination, plus some willing students.

Van Der Kemp was born in 1964. His childhood ambition was ballet-dancing. A year of ballet school told him his body wasn’t right for that. He enrolled at the Gerrit Rietveld Academy of Art and Design in Amsterdam where he bonded with Inez and Vinoodh over a shared love of Helmut Newton’s photos in Vogue Paris. “I always go back to the late 70s, early 80s,” Van Der Kemp says now. “I loved the Newton woman, strong, not necessarily beautiful, not that young. Like Paloma Picasso. There’d be something not quite right, like the suit with no underwear.”

He interned with Courreges in Paris at the end of the 80s, “but I didn’t feel at ease there." So he headed to New York and that’s where it all came together. For four years, he worked for Bill Blass on dresses, menswear and the bridge collection. He was shaped by the Blass ethos (though unfortunately he had very little contact with the fabulously entertaining Blass himself). “To show a twinset with an evening skirt? So brilliant, so easy!” Van Der Kemp rhapsodizes. “And I loved the women who came to his show. Judy Peabody? Nan Kempner? You don’t see those ladies anymore. They don’t exist.”

He managed to track down Kempner’s archive to New York Vintage, at 25th and 6th. “I was so excited. These were the kind of clothes I wanted to make. Old YSL, Blass, Beene. You could feel the hand of the clothes, feel when something was a little wrong. It wasn’t the industrialised sameness of now. And that’s the inspiration for the one-of-a-kind aspect of my work.” 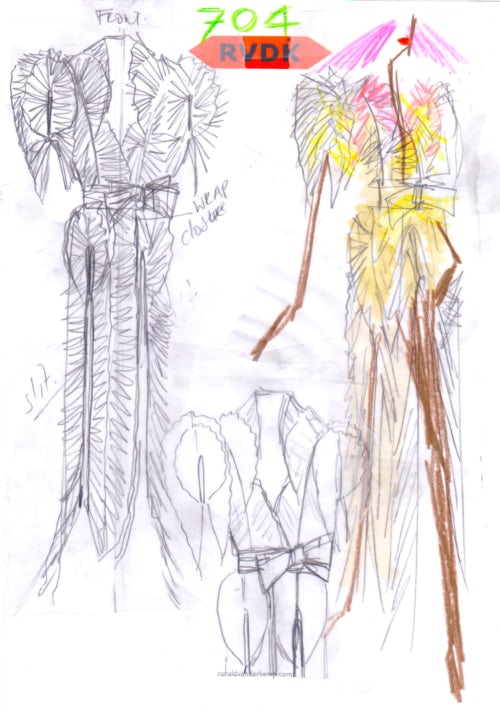 A sketch from the upcoming RVDK collection | Source: Courtesy

It was all those years spent assisting and consulting – at Courreges, Blass, Laroche, Celine and on and on – that convinced Van Der Kemp his work shouldn’t look like anyone else’s. That’s partly why he moved back to Holland in 2014. He loves that he doesn’t get distracted in Amsterdam. “I’m not typically Dutch,” he says. “They’re used to the conceptual, I’m much more intuitive. I stay in my own world.” It’s a world which is populated by a willing team of artisans who were used to making stuff for the theatre. “In Paris, they’d be working for Chanel or some other big house. With me, they can do things they’ve never done before.”

That’s the kind of idealist Van Der Kemp is at heart. “It’s not about selling clothes and making a lot of money, it’s about trying to inspire people. You don’t need new clothes every day. People are after a superficial image. You see them making masks for themselves on Instagram. It’s crazy. You wipe away your own personality. I try to see who you really are. To feel good about yourself. That’s what I’m learning from old people, the importance of character and eccentricity. That’s what Gaultier in his heyday was all about, and people loved it.”

So, it’s unsurprising that Van Der Kemp, as easygoing as he seems, has few good words for the current state of the industry. “People are looking for opportunity and fashion is letting them down,” he claims. “When you’ve seen one girl at a fashion show, you might as well leave. You’ve seen it all. That’s why they do all these big sets, all this other stuff, to distract from the clothes. It’s about who screams the hardest. That’s how Trump got elected. Brands make too much noise, people are waiting for the opposite, the whisper, not the scream. But you can see something happening. Thank God for diversity with the models. People want that. You can see them responding.”

The noise in the NoMad bar is peaking. It’s getting hard to hear Van Der Kemp. Will he be fashion’s hoarse whisperer? “It’s a loud whisper,” he answers thoughtfully. “It’s not hiding.” It will most definitely be out in the open again this week in Paris.