Hello BoF Professionals, your exclusive weekly briefing is ready. Don't forget to check out our members-only events in New York and London and download the BoF Professional iPhone app.

This week, Condé Nast shut down Style.com. The axe came less than a year after the media giant relaunched the property as a fashion e-commerce site. Condé Nast planned to invest $100 million over the first four years of the venture and the closure constitutes a major failure for the company, which has been struggling to create new revenue streams as print advertising sales decline.

It’s certainly not that the venture was poorly timed. Luxury e-commerce is hitting what McKinsey & Company calls a “tipping point” with the portion of personal luxury goods purchases that occur online — now about 7 percent of total — expected to roughly triple to 20 percent by 2025, making e-commerce the world’s third largest luxury market after China and the US.

Building a technology company is outside Condé Nast’s core competency, but the demise of Style.com underscores something broader: the challenges that legacy media players like Condé Nast have faced as they try to build digital businesses from scratch. Now, the same digital tsunami that’s driving the shift to e-commerce is coming for the company’s core.

Condé Nast is ultimately in the business of creating inspiring content and selling the resulting eyeballs to advertisers. Today, print still makes up the majority of advertising spend for most luxury brands. According to Zenith, a media buying agency, print accounted for 73 percent of luxury fashion, watches and jewellery marketing budgets in 2016, a figure that’s expected to drop only marginally to 72 percent this year.

But make no mistake. A sea change is coming. The budgets currently being allocated to print advertising are fundamentally out of sync with how consumers spend their time. Indeed, the average American now spends more time on digital media and technology than work or sleep, according to Michael J. Wolf, founder and chief executive of technology and strategy consulting firm Activate.

What’s more, recent data presented by Mary Meeker, general partner at venture capital firm Kleiner Perkins Caufield & Byers, reveals that Americans spend only 4 percent of their media consumption hours with print, compared to 20 percent on personal computers and 28 percent on mobile. Then there’s the tremendous power of earning attention on social media, which is cost-effective, highly impactful and perceived as more authentic than traditional ads.

According to Zenith, the amount of money the luxury industry spends on digital advertising hit $1.01 billion in 2016, up 63 percent since 2013. Over the same period, spending on magazine ads fell 8 percent to $2.6 billion.

While many industries began shifting their advertising spend to digital years ago, luxury industry executives — many of whom have been slow to recalibrate their marketing strategies — are now sitting up and taking note. Increasingly, they see less value in their longstanding relationships with traditional fashion media titles, despite their willingness to exchange editorial coverage for marketing dollars.

Meanwhile, at Condé Nast, print advertising still generates the majority of the company’s revenue. Digital advertising accounts for only a small slice of the overall pie. In search of new revenue streams, the company is doubling down on native advertising, a new name for a longstanding practice once called advertorial, whereby a publisher sells agency-like services to develop and distribute advertising that looks and feels more like editorial. It’s also ramping up on licensing, something Condé Nast has been doing for years. More recently, the company has been lending its brand names to bars, restaurants, schools and beyond. But these initiatives have only driven incremental revenue, which is simply not enough to make up for the coming implosion of print advertising as brands realise their budgets are better spent elsewhere.

Condé Nast’s greatest assets are its brands. The company owns some of the most powerful fashion and lifestyle titles in the world, including Vogue, GQ and Vanity Fair. Yet it has thus far failed to find a way to meaningfully monetise these brands in a way that’s aligned with the media consumption habits of today, let alone tomorrow. And as consumers spend less and less time with traditional media companies, shifting more and more of their attention to media-technology platforms like Facebook, even the strongest Condé Nast brands could slowly begin to lose their value.

So what are the options?

Of course, there’s the possibility that Condé Nast embraces the future and becomes a truly digital first company. But its recent track record doesn’t instil confidence. And, as Harvard Business School professor Clayton Christensen outlined in his seminal book "The Innovator’s Dilemma", it’s exceedingly rare for a dominant player to maintain its market position in the face of a major technology disruption.

There have also been rumours that Condé Nast could sell itself — possibly to arch-rival Hearst. Condé Nast is a family-run business owned by the descendants of S.I. Newhouse Sr, who have a clear incentive to maintain their fortunes rather than watch their most valuable assets depreciate as a digital tsunami gather force.

LVMH raises concern over global economy. Bernard Arnault, the chairman and chief executive of the French luxury group, said low and negative interest rates were creating a "very strange period" for business and that he was worried about the global economy. “There’s a lot of money in the market,” he said. “Bubbles are building up and at some point they’ll explode. Very soon we’ll be over 10 years without a crisis, so be careful.”

Wal-Mart acquires Bonobos. Walmart announced on Friday that it has agreed to buy online men's retailer Bonobos for $310 million, its fourth e-commerce acquisition in less than a year. The brand's clothing and accessories will be available on its Jet.com platform. The move follows Wal-Mart's purchase of ModCloth, Moosejaw and Shoebuy earlier this year and marks Wal-Mart's aggressive efforts to transform itself into a leading player in the e-commerce market.

Inditex first quarter profit rises. The world’s biggest clothing retailer posted its fastest earnings growth in nearly two years, reporting on Wednesday that first quarter net profit rose by 18 percent to €654 million ($729 million). The company has defied the gloom affecting its rivals in fast fashion by adopting one of the most advanced inventory tracking systems in retail across its Zara stores and plans to extend its online business to new markets in the coming months.

H&M misses sales forecasts. The Swedish fast fashion retailer reported slower than expected sales in May, missing analyst forecasts. The company said it was affected by tough market conditions in several countries. The disappointing results come as H&M is under increased pressure from Inditex and new online players.

Neiman Marcus shelves plans for a sale. The US department store said on Tuesday that it had ended talks regarding a partial or full sale of the company, nearly three months after it announced it was seeking strategic alternatives. The company was reported to have been in discussions with Hudson’s Bay regarding a potential deal, after cancelling its plans for an initial public offering earlier this year.

J.Crew seek debt swap, meets opposition. The ailing retailer announced a debt swap on Monday to persuade its lenders to drop pending litigation but the offer is already meeting resistance from some of its creditors. The news comes at a time of upheaval for the company, as it struggles with nearly three years of declining sales and a debt load of around $2 billion. Last week, it announced its long-time CEO Mickey Drexler would leave his role after 14 years.

Crisis deepens at Lanvin. France’s oldest fashion brand is facing a crisis within its organisation and has appointed advisory firm Long Term Partners to conduct an audit of its business, according to a report. Sales at Lanvin are said to have fallen by 32 percent in the first two months of 2017, with the company expected to reduce its advertising spend and store investments to help cut costs.

Mulberry profit rises 21 percent. The British luxury handbag maker reported a 21 percent rise in annual pre-tax profit on Wednesday, helped by a rise in online sales. But the results also showed that overseas like-for-like sales fell by 3 percent, which could prove a challenge for the company as it plans further international expansion. Mulberry is in the midst of a turnaround strategy, after an ill-considered attempt to radically elevate its offering backfired, alienating former customers without attracting new fans.

Estée Lauder shuts down Estée Edit. The beauty conglomerate announced on Wednesday that it will shut down Estée Edit, a millennial-targeted line of makeup and skincare designed specifically for Sephora, by the end of September. Estée Lauder launched the line over a year ago to help Sephora connect with millennial consumers, but said it decided a separate brand in North America was no longer necessary. 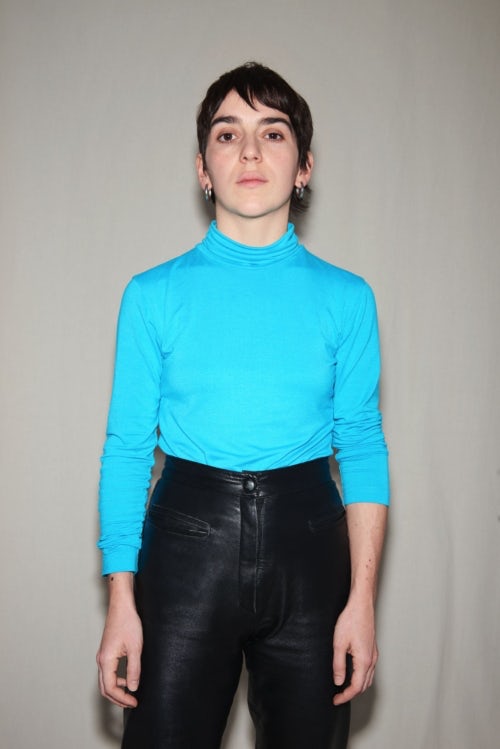 Marine Serre awarded LVMH Prize. The Belgian-French designer was named the winner of this year's LVMH Prize. Based in Paris, Serre is known for her Islamic motif-infused sportswear, which she told BoF was an answer to last year’s terror attacks in Paris and Brussels. The label will receive a €300,000 grant and a year-long mentorship from executives at the French luxury conglomerate.

Gosha Rubchinskiy collaborates with Burberry. The Moscow-based designer unveiled a collaboration with the British heritage brand at his rave-themed Spring/Summer 2018 show, held in Saint Petersburg. The move seemed to signal that Burberry may be shaking off what some observers have come to see as an overly constrained creative vision, put in place after a period of brand dilution over a decade ago, when its signature check was adopted by so-called "chavs."

J.W. Anderson partners with Converse. At his menswear show at Pitti Uomo in Florence, the designer unveiled a new long-term partnership with Converse. The move marks the beginning of what Anderson says is a new collaborative and scale-focused era for his brand, which is entering into its second decade.

Venetia Scott named fashion director at British Vogue. Edward Enninful, incoming editor-in-chief of British Vogue, has announced his first editorial hire, appointing Venetia Scott fashion director. Scott, an acclaimed stylist and photographer, will replace Lucinda Chambers, who resigned in May after 36 years at the title. She will join the company on July 10. Her appointment comes amidst a wider shake up at British Vogue, as Enninful positions himself to make his mark at the magazine.

Condé Nast closes Style.com, signs partnership with Farfetch. Less than a year after the publisher relaunched Style.com as a fashion e-commerce site, Condé Nast is shutting the business and forging a new strategic partnership with Farfetch. The deal is a major reversal for the media giant and appears to underscore the challenges legacy media players face in building technology companies from scratch.

Instagram wants influencers to label paid posts. The image-sharing app published a blog post asking users to include a “paid partnership” tag on content that they are being paid to share. The move comes after the US Federal Trade Commission sent more than 90 letters to Instagram influencers reminding them to “clearly and conspicuously disclose their relationships to brands.”

Snap said to be developing augmented reality Spectacles. The company is reported to be working on a second generation of its video-recording glasses that could include an augmented reality feature, according to a report. The move comes as competition among social media apps is heating up, particularly from Facebook, whose Instagram app has debuted more video-sharing features in the past year.