Merchandise is confined to a few suspended metal racks — and for the Calvin Klein pompoms, a display case — spread across five David Chipperfield-designed floors. The space is designed for maximum flexibility; on Thursday, the building was given over to a launch party that featured the performance artist Arca diving into a pink-hued pool. A few hours later, racks and mannequins were in place for the store’s May 3 opening.

But selling $2,000 Gucci brogues to Montréal tourists isn’t really the point. Five years in the making, Ssense’s new store, here in its hometown, is the company’s coming out party — a sign the company, which started over 15 years ago as a student project and today sells high-end streetwear and avant-garde emerging labels, is positioning itself for a run at the top echelon of luxury retailers.

Chief executive Rami Atallah said Ssense is "on track" to hit 1 billion Canadian dollars (about $800 million) in sales in 2020, and plans to open distribution centers in Europe and Asia in the next 12 to 18 months. Ssense declined to disclose current revenue figures.

It’s a long way from the single warehouse and small boutique near its Montréal headquarters that the company operates today. But hitting ten figures won’t be easy. Dozens of companies are competing for luxury goods spending online, a fast-growing market that has tripled in size over the last five years, to about $23.5 billion in 2017, according to global consultancy Bain & Company. 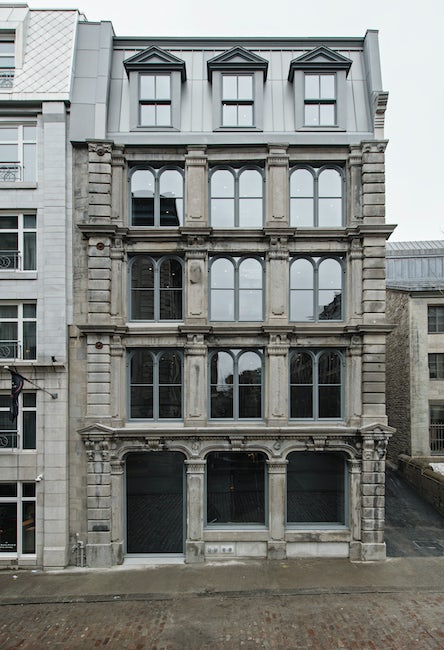 Ssense certainly has some catching up to do. MatchesFashion reported about $280 million in revenue for the year ending in January 2017, and operates three stores in London to complement its online sales. Farfetch moved $800 million worth of merchandise in 2016, and may ride its “Store of the Future” retail technology platform to a $5 billion initial public offering later this year. Richemont’s Yoox Net-a-Porter hit $2.5 billion in sales last year, and LVMH launched its own multi-brand e-tailer in June 2017, though it remains a small player.

But Ssense is also plotting its expansion at a time when global demand for its streetwear-meets-luxury aesthetic is surging. Designers who Ssense championed at the start of their careers, like Virgil Abloh, are hotter than ever.

And unlike many of its competitors, Atallah says Ssense has been profitable from day one and hasn’t raised outside investment. He said that enables the company to play the long game, taking risks on unknown designers, investing in editorial content and projects like the Montréal store that may not significantly boost sales in the short term.

Atallah said the plan is to use Ssense's profits to open the new warehouses in Europe and Asia. He wouldn't rule out going public in the future. The company is also mounting a campaign to boost sales in China, one of the world’s largest luxury markets, with Mandarin and Cantonese versions of its website set to launch in July.

“I believe in sustainable growth,” says Atallah. “You hear a lot about companies that get a lot of funding and two years later you don’t know what’s happening with them. We’re only investing what we’re making, which makes our business a lot more robust.”

Born in Syria, Atallah emigrated to Canada with his family at the age of 15. He built Ssense in the early 2000s as part of his graduate thesis in computer engineering.

He enlisted the help of his two brothers Firas and Bassel — now chief financial officer and chief operating officer, respectively — to transform his part-time passion project into a fully-fledged business.

In 2004, Ssense opened a small boutique in Montréal. The following year it moved into its first headquarters and warehouse, with ssense.com launching in 2006. Early versions of the website featured mainstream brands like Juicy Couture and 7 For All Mankind. Sales quickly started to rise; the company has seen revenue grow an average 60 and 80 percent annually.

Ssense’s big break came in 2009 when it began carrying a more unconventional and tightly curated assortment. Over time, that came to mean uniting established luxury brands like Saint Laurent and Givenchy with streetwear-inspired emerging designers such as A-Cold-Wall and Fear of God.

Where some stores still separate high fashion and mass-market goods, a search for tops on Ssense pulls up options ranging from a $25 Adidas t-shirt to a $1,500 offering from Yohji Yamamoto.

Atallah and other executives said their approach is supported by reams of customer data, which informs decisions ranging from what products to stock to which editorial features to display on the homepage.

The combination of streetwear savvy and data analysis has cemented Ssense’s cultural cred with millennials, who today account for 76 percent of sales. The company has few equals in getting customers to open their wallets online: Ssense says its average order size is nearly 800 Canadian dollars ($700), more than Net-a-Porter’s average of nearly $400, though less than Moda Operandi’s $1,400 per order.

“I think that [Ssense] has been extremely smart and laser-focused in their approach to attracting this customer,” said Robert Burke, founder and chief executive of retail consultancy firm Robert Burke Associates. “They’re not trying to be everything for everyone.”

Ssense’s data-driven approach led it in April to purchase some of the assets of digital fashion community and search engine Polyvore from Verizon subsidiary Oath Inc.

The site’s users learned of the deal when they were redirected to Ssense’s homepage, where a popup displayed the message “Polyvore is now Ssense.” Users rebelled, with over 16,000 signing an online petition to bring the site back, and flooding third-party rating sites like Sitejabber with one-star reviews of Ssense.

Atallah wouldn’t say why Ssense bought Polyvore, other than as a means to extend his site’s audience. Arnie Gullov-Singh, Polyvore’s chief operating officer until 2017, said the company had developed an advertising platform that promoted products in search results, then measured the sales and new customers those ads generated. However, he added that Polyvore’s community was its most valuable asset, making it a “bizarre” choice to shut it down.

“I didn’t realise the intensity of the relationships being formed on the platform. In this case we could have handled it differently [but] business is about taking risks,” Atallah said.

Ssense is investing in global expansion just as some of the biggest fashion houses embrace streetwear’s aesthetics to lure younger customers. Just last year, Ssense added key luxury brands including Gucci, Balenciaga and Prada to its online selection. While that’s likely to bring in more mainstream shoppers, Ssense also risks alienating its original customer who comes to the platform to discover "in-the-know" brands instead of commercial labels.

“[In order for] Ssense to grow, they need to keep that niche focus as opposed to a commercial focus,” says Burke. “If it starts to feel commercial or if it loses its cool factor, that customer is the first to abandon it and move on.”

So far, the site’s youth-friendly presentation and knack for listing just the right items still makes it an appealing platform for the next generation of designers, said Matthew Williams, who has been selling his label Alyx on the platform since early 2017. And Ssense is still the go-to website for in-the-know fashion devotees looking to find relevant luxury streetwear.

“It’s that unique combination of their buy that gives them that edge which I would largely attribute their success to,” says David Fischer, founder and chief executive of youth culture title Highsnobiety. “At the same time, they present all that in a very minimal aesthetic that a lot of people really connect with because it comes across as very high quality and contemporary.”

In 2015, Ssense hired Joerg Koch, editor of German contemporary culture magazine 032c, as the website’s first editor-in-chief, and last year redesigned the homepage to hide the site’s products behind a drop-down menu, putting front and center Koch-commissioned articles, photo editorials and interviews with a wide range of cultural leaders from Peter Saville to Donatella Versace.

For Atallah, the investment in editorial was another strategic attempt to stand out from competitors. Koch said he initially presented ideas for product-focused content that would drive the most direct sales, a strategy widely used in online retail. But Atallah told him to focus on stories and interviews that would help create an emotional connection between Ssense and its customers, as well as bring in new audiences. 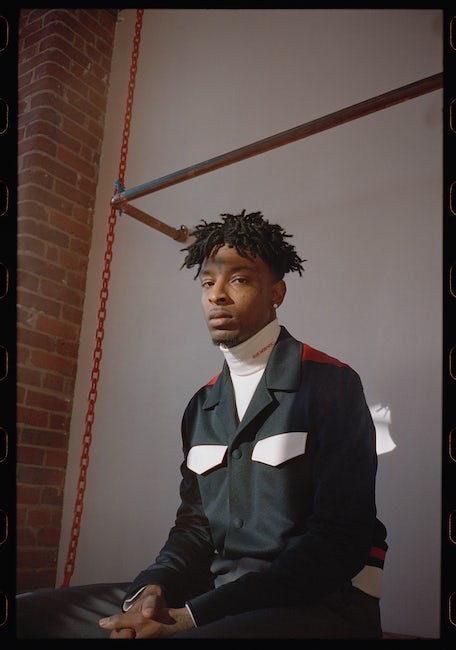 Today, 29 percent of revenue is generated via Ssense’s readers. Atallah has described content as a relatively untapped revenue stream, and the company plans on ramping up its editorial division in the near future.

Koch said he attempts to strike a balance between data-informed content he knows will go viral or drive sales, and features that might prove less popular but will help sustain Ssense’s credibility.

“When you talk about a story that doesn’t relate to product and you try to shoehorn the product in, it’s not authentic,” Atallah said. “There’s a lot more value in engaging emotional attachment than trying to force the product as [shown by] the data.”

Ssense Montréal is part of that effort, with plans to make the flagship a cultural hub that will stage events, launch products and ongoing cultural programming led by Koch. Already on the calendar are events staged by designers such as Abloh, Craig Green and Grace Wales Bonner, with plans for happenings such as book clubs, record launches and meditation sessions.

Chipperfield’s design is meant to make each event a unique experience. The building’s floors, walls and ceilings are pockmarked with hundreds of convertible sockets, making everything in the store — from displays to lighting — interchangeable.

The top floor is given over to a café and bookshop, while two floors are dedicated to personal shopping appointments. Customers can pick from 20,000 products offered online and have them whisked from Ssense’s main distribution centre within an hour.

While Ssense was developing its store, competitors have focused on speeding up delivery to customers’ homes. Ssense ships to 136 countries out of its Montréal warehouse, but next-day delivery is its fastest service, and free express shipping can require orders as high as $500 in far-flung countries. That compares with 90-minute fulfillment for Londoners shopping with MatchesFashion and some Gucci purchases on Farfetch in 10 cities. Net-a-Porter opened a warehouse in New Jersey in addition to its London distribution center, allowing it to offer same-day delivery in the New York City area.

Relying on express airfreight out of Montréal is likely costly and slower than similar service out of the U.S. or European Union, said Satish Jindel, president of shipping research firm SJ Consulting Group. Opening warehouses in other countries would cut those expenses by as much as half and reduce the number of orders that get held up at customs.

“Every time you cross a border, your shipping charges go up,” he said.

Atallah said the company is looking into ways Ssense can offer same-day delivery, which he said will become more feasible as Ssense opens additional warehouses.

He said the content produced in the Montréal store will help promote Ssense’s brand worldwide, as well as provide a testing ground for Ssense to observe customer behaviour and generate yet more data. The goal is to replicate the Montréal store model in other cities, with each location tailored to local tastes. Atallah declined to say which cities are under consideration.

“I believe we’re doing something no one else is doing or can do,” says Atallah. “We need to raise customers’ expectations and blow people’s minds.”

Disclosure: Christopher Morency and Brian Baskin travelled to Montréal as guests of Ssense.