After falling behind with millennials, the industry tries to secure a future generation of customers via school sponsorships and social media strategies.

ZURICH, Switzerland — When she was 15, Justine Guiblain designed a watch for Corum, one of several Swiss makers of luxury timepieces desperate to secure captive customers years from now.

Her drawing featured a dial that moves counterclockwise with the words “le monde tourne à l’envers” (the world is upside down) etched along the watchface and strap. Oddly appropriate for the moment: after decades of having clients come to them for elegant craftsmanship, Swiss watchmakers are now pursuing notoriously fickle teens to survive an uncertain future.

Guiblain admits she “didn’t know a lot about watches” before winning a competition of 10th- and 11th- graders at Collège Numa-Droz, a school in La Chaux-de-Fonds, near Switzerland’s western border with France.

That’s exactly the change of heart manufacturers of the world’s most coveted handcrafted analog watches are aiming for after two years of declining exports, the longest slump since records began. With the proliferation of smartphones, smartwatches and fitness bands that tell the time, it’s hard to predict whether today’s teens will dole out thousands of dollars for Swiss timepieces when they can afford them.

The watch industry was a bit complacent about recruiting a new consumer generation. They learned from their mistake being late with millennials.

Aside from Corum, Hublot is sponsoring four private schools to reach teens whose parents cough up the roughly 30,000-Swiss-franc ($30,000) annual fees for non-resident students.

Clocks designed by Hublot — whose average wristwatch costs more than half a year’s tuition — hang in the reception area and gymnasium at Collège du Léman near Geneva. This year’s valedictorians will receive the company’s new smartwatch; Hublot even designs watches with the institution’s logo for the school community to purchase.

“The idea is to do storytelling around Hublot so that the brand becomes aspirational,” said chief executive Ricardo Guadalupe, who’s considering trying out the same strategy in the US, where only one in five young people wears watches every day, according to a Deloitte LLP survey. “Since they’re at private schools, they’re already potential future consumers.”

Starting early is key given teens today are some of the most recalcitrant shoppers in modern history. Part of a group called post-millennials, they like shopping online to the bane of brick-and-mortar retailers and spend loads of time on social media.

They may be a tough group to crack, but the artisans of Swiss timekeeping don’t have a lot of choice after failing for many years to connect with millennials, a demographic generally spanning 22- to 37-year olds, less than a third of whom wear a watch every day.

For a long time, that didn’t matter to the watch wizards who benefited from booming Chinese demand. But after China cracked down on corruption, sales of their expensive wristwatches — often given as gifts to curry favour with businessmen and politicians — slid. Terrorist attacks in Europe kept Chinese tourists at bay, exacerbating the drop. 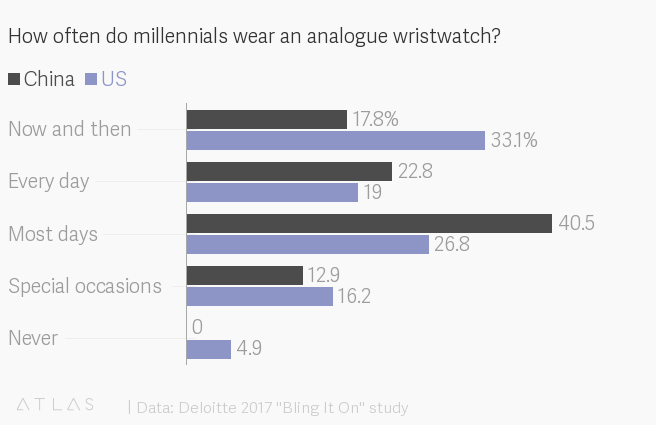 “The watch industry was a bit complacent about recruiting a new consumer generation as they had an army of eager new consumers from China in front of them,” said Luca Solca, an analyst covering luxury goods for Exane BNP Paribas. “They learned from their mistake being late with millennials.”

Brands have inundated social media to make up for lost time: Patek Philippe opened an account on Instagram in March, while IWC Schaffhausen and Audemars Piguet have joined Chinese messaging and social-media app WeChat.

“Some private schools in Switzerland are very proud of this inheritance and proud of bringing forward the Swiss tradition of time and precision,” said Cedric Antonio, head of marketing at Collège du Léman.

Students there have a chance to secure internships at Hublot’s French parent, LVMH, which makes luxury goods like Louis Vuitton handbags. Collège du Léman has had similar collaborations with Audemars Piguet and Cartier in the past, Antonio said.

They need to be careful not to push their products on an immature consumer and dilute the brand.

While trying to strike a balance of changing with the times and retaining a measure of exclusivity, watchmakers should be wary of marketing too aggressively, according to John Guy, head of luxury and sporting goods at MainFirst Bank AG in London. “They need to be careful not to push their products on an immature consumer and dilute the brand for existing customers,” he said.

They are trying to be subtle. Zenith, which has been fashioning watches since 1865, recently started opening its factory in Le Locle in the French-speaking part of Switzerland for tours once a week so the public could see the craftsmanship behind classic mechanical watches that cost an average of about 9,000 francs.

According to chief executive Julien Tornare, the watchmaker will add children’s visits.

“The kids now, even though they’re far away from being the target today, there are some famous brands they already know represent success,” he said. “You can recruit clients, but you can also recruit watchmakers. You’re basically preparing for the future.”