PARIS, France — In April, Versace partnered with Goat, a popular marketplace app specialised in selling rare sneakers, for the launch of the Italian house’s Chain Reaction sneaker. Despite its $920 price tag, there was a mad rush on the colourful, chunky model, which sold out within 24 hours, something that neither of the parties had seen before.

The release was a year in the making for the brand, where until recently sneakers were an afterthought. That changed in September, when Salehe Bembury, a Yeezy veteran, reached out to the company via LinkedIn with a proposal to turn around the brand’s sneaker category. He was hired that same month and began designing several lines of shoes aimed at appealing to a wide variety of customers. And the Chain Reaction would put Versace on the sneakers map.

“The way that I’m doing it is by creating a ‘good, better, best’ [model] and above that is the peacock, which is the Chain Reaction,” he said. “Ultimately the attention that comes with this model will help you sell your lower hanging fruits that are easier to understand by the mass consumer.”

Brands from Gucci and Balenciaga to Prada and Louis Vuitton have embraced the idea of sneakers as the gateway to a new generation of luxury consumers. They are increasing the number of sneakers on offer, diversifying price-points and even moving manufacturing from Italy to China.

It’s a smart move: the lines between street culture and luxury are blurring, and more people are dressing casually 24/7. That helped drive sneaker sales 10 percent higher last year, to $4 billion, according to Bain, outperforming a 5 percent rise in the overall luxury personal goods market. And whereas Nike and Adidas have dominated the sneaker landscape for decades, their lower price range left an opening for luxury brands.

Sneakers are the latest examples of luxury brands latching onto high-margin goods with broad appeal, much like handbags. Like handbags, sneakers are cost-effective status anchors that can be worn on a wide range of occasions. And while the development process for sneakers can be expensive at first, they tend to sell-through at higher rates than ready-to-wear and drive more sales per square foot in stores because they take up less space.

They’re a hit online as well. At Net-a-Porter, designer sneakers currently account for one-third of total sneaker sales, up from one quarter in 2017, said Elizabeth von der Goltz, the site’s global buying director. Luxury sneaker sales grew by 50 percent for Spring/Summer 2018 compared to a year earlier. At MatchesFashion, sales growth for luxury sneakers doubled year-on-year between 2017 and 2018, compared with a 44 percent increase in overall sales, said Cassie Smart, the site’s shoe and handbag buying manager.

Sneakers are cost-effective status anchors that can be worn on a wide range of occasions.

“Brands aren’t taking the old way of thinking and [instead] are pushing the envelope and moving away from the safe route of creating the same product in different [colours] for years,” said Matt Cohen, vice president of business development and strategy at Goat Group.

Prada chief executive Patrizio Bertelli in a March earnings call singled out the brand’s Cloudbust model, which launched in August 2017, as a commercial win. The shoes have also been a hit on social media, he told BoF in May.

“As soon as you launch a campaign, you immediately see traction,” he said.

Similar wins can be seen at houses including Gucci and Valentino, as well as at the menswear lines of Louis Vuitton and Dior Homme — both of which launched sneaker-heavy collections earlier this month under leadership of new artistic directors Virgil Abloh and Kim Jones.

For Balenciaga, the industry’s biggest disrupter in terms of the luxury sneaker movement, the category has become big business as well, ever since Demna Gvasalia took over the reins of the house in October 2015. At the time, other luxury brands created sneaker versions of their sartorial shoes, but Gvasalia looked to sportswear companies for inspiration. Under his tenure, Balenciaga has become Kering’s fastest-growing brand.

“Sneakers aren’t a new product, it’s the customer who’s new,” said David Tourniaire-Beauciel, design director of shoes at Balenciaga and creative director at Clergerie.  “They’re looking for comfort, colour, technology and to be cool and elegant at the same time. To me it’s about mixing Manolo Blahnik with Nike.” 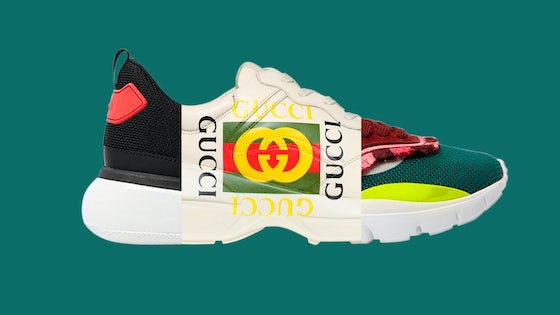 Tourniaire-Beauciel, who has over 25 years of experience in footwear design, working under Jean-Paul Gaultier, Phoebe Philo at Chloé, Martin Margiela and Riccardo Tisci at Givenchy, is responsible for some of today’s most popular luxury sneaker designs, including Balenciaga’s Triple S and Speedrunner models and Martin Margiela’s Replica and Future models.

But as luxury sneakers have gone mainstream, and the market has become more saturated, brands will have to up their game in order to stand out, said NPD sports industry analyst Matt Powell.

“The derivative path is the one that they’re on now,” he said. “Brands reworking somebody else’s ideas are in a precarious place, so there’s a need to really develop their own point of view.”

Being disruptive will always be important in order to gain traction, says Tourniaire-Beauciel, who sparked public debate after the launch of his exaggerated, chunky “dad” Triple S sneaker. Although the form in which this will happen will change.

“The next evolution that we’re working on is where the technology is less visible. It will come back to a nice shoe in terms of shape and volume where you won’t see the technology like memory foam and GPS hidden in the shoe. It will be an iPhone for your feet,” he said.

Luxury’s sometimes glacial production process is also proving a poor fit for the fast-moving sneaker culture. Some houses tease sneaker images on Instagram months before launch, a marketing tactic that, according to Powell, shortens the shelf life of the product as consumers have already moved on by the time the product becomes available in stores.

However, creating a high-quality, luxury product takes time, and scaling the business and speeding up this process may damage the very elements that draw consumers in in the first place.

Earlier this year Balenciaga moved production of its $850 Triple S sneaker from Italy to China. Tourniaire-Beauciel said the decision was made to keep up with demand, rather than to cut costs. He said Chinese manufacturers are better-equipped to produce high-tech designs. They’re also willing to work with smaller quantities — 500 pairs where they might once have needed an order of 10,000, he said. That’s crucial, as Balenciaga needs to constantly change its designs to stay on top of trends and drive demand.

“In regard to ramping up and increasing volume, moving production is pretty necessary,” agreed Versace’s Bembury. “It doesn’t have to be China but those are definitely things that are being discussed as we evolve the business and keep up with consumer demand.”

Key to breaking through the noise is to have a smart communications strategy rooted in creating cultural credibility. During Versace’s Autumn/Winter 2018 menswear show held in Milan in January, the brand debuted its Chain Reaction sneaker in collaboration with American rapper 2Chainz.

The stint was followed by a social media campaign and months of product seeding to influential figures in contemporary culture pre-launch, including Migos, Bella Hadid, Cristiano Ronaldo, Takashi Murakami and Lena Waithe, among others.

“Now we have an entire consumer base looking at our brand from a new standpoint that Versace didn’t have in the past,” Bembury said. “That’s the opportunity.”