Illustration by Rodja Galli for BoF
Luxury
Share
5 Comments
By Christopher Morency May 21, 2018 05:25

NEW YORK, United States — Cardi B and Anna Wintour? It was this unlikely front-row pairing that got the fashion flock buzzing when American designer Alexander Wang presented his Autumn/Winter 2018 collection at the old Condé Nast offices high above New York’s Times Square in February. After all, the seat next to Wintour, the most powerful figure in fashion, is usually filled by fellow magazine editors, industry chief executives, Hollywood stars — even royalty.

While Wang has long been a fan of hip-hop, the placement of the 25-year-old female rapper — a Bronx native who broke out in 2017 after her track “Bodak Yellow” took the number one position on the Billboard Hot 100 Chart — speaks volumes about how the wider fashion industry has changed its stance on hip-hop, which, in December, surpassed rock to become the most popular music genre in the US.

“It’s important for this generation and the next generation to see people that look like them or that inspire them, because fashion isn’t just for the elite any more,” says rapper A$AP Rocky, who is as well known for his sense of style as he is for his music. “Fashion is for everyone and the more you try to exclude people, you’ll find out that those are the same people you need to include the most.”

Whether it is A$AP Rocky and the rest of the A$AP Mob starring in the latest instalment of Calvin Klein’s #MyCalvins campaign, Gucci paying “homage” (some cried “cultural appropriation”) to Daniel “Dapper Dan” Day in its Cruise 2018 collection or Dior Homme inviting rappers like Future, Big Sean and Metro Boomin to Kris van Assche’s final collection for the house in January 2018, fashion brands have woken up to the reality that hip-hop has replaced Hollywood as the most powerful force in global entertainment culture.

Over the past two years, more than a dozen luxury brands — including Louis Vuitton, Saint Laurent and Marc Jacobs — have featured hip-hop artists in their advertising campaigns, while brands like Versace and JW Anderson have taken things a step further by collaborating with artists like 2 Chainz and A$AP Rocky on products.

Hip-hop artists are storytellers and news reporters of the times.

This was not always the case. For many decades, hip-hop was seen to be brand-diluting for major luxury houses, who dismissed the growing power of street culture. When Daniel “Dapper Dan” Day opened his boutique in New York’s Harlem in 1982, he was swiftly sued by Fendi, whose lawyers were not amused by his extravagant designs emblazoned with signature logos from their brands and sold to influential rappers, athletes and street hustlers. The store was ultimately shut down in 1992, following a slew of raids and lawsuits.

“In the early days it was devastating, I was attacked constantly,” recalls Day. “They felt that I was infringing upon their brands, but all I was doing was making a statement. You can go on forever about what the line is between appropriation and aesthetic creation.”

Today, following a social media-fuelled outrage suggesting that Gucci had stolen — not paid homage to — Day’s work with its replica of one of Day’s 1989 jackets for its Cruise 2018 collection, the designer is partnering with the Italian megabrand on made-to-order garments and limited-edition products, sold from Gucci’s new Harlem boutique, which opened in January. “A sign of the times!” exclaimed Day in a tweet announcing the boutique’s January 2018 launch.

But beyond working with Day, Gucci has invited rappers like A$AP Rocky and Childish Gambino to its runway shows and is worn by artists such as Migos and 2 Chainz, boosting its well-documented success with younger luxury consumers.

Certainly, hip-hop is a powerful tool for reaching Generations Y and Z, who are expected to account for 45 percent of the global luxury spend by 2025, according to Bain & Company.

“It’s a way of reaching young kids that usually would not take an interest in high-end fashion or high-end tailoring,” agrees Kris van Assche. The recently appointed artistic director of Berluti previously spent 11 years as artistic director of Dior Homme, which dresses several hip-hop artists, including A$AP Rocky, Big Sean and Future (these rappers have also made regular front row appearances at Dior Homme’s runway shows). “It’s a way of getting the message over to them.”

“Hip-hop artists are storytellers and news reporters of the times, [and] with hip-hop being the number one music genre, it proves that hip-hop artists drive culture,” says stylist and fashion consultant Aleali May, who has worked with popular rappers including Kendrick Lamar, Lil Yachty and 21 Savage. “Fashion is paying more attention to its consumers now more than ever,” she adds. “The old way of thinking is out the door and, in order to attract the next generation, there needs to be an analysis on what’s driving the consumer.” 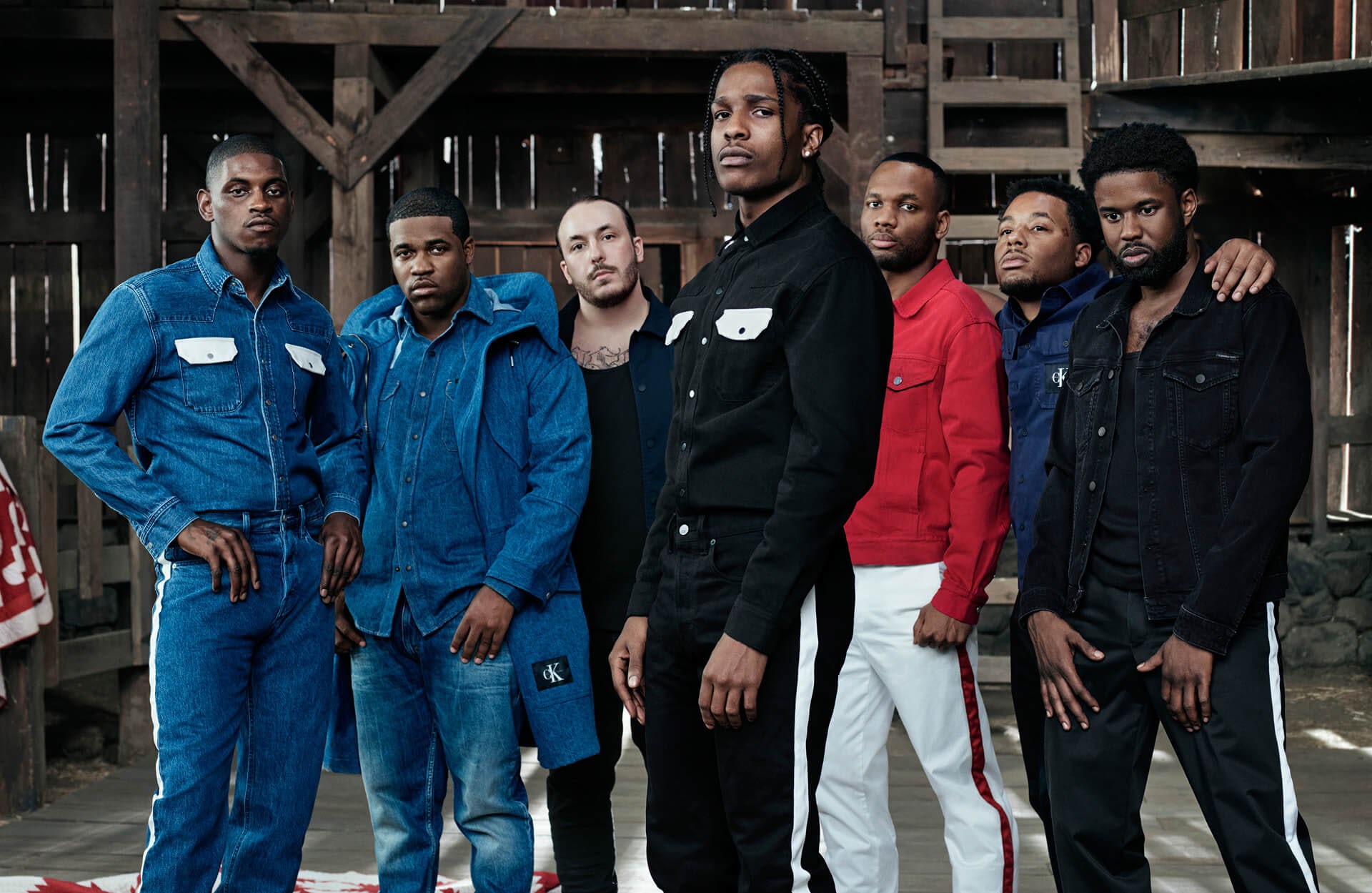 “[Rappers] like Kanye come from a completely different angle and are more open-minded. Their biggest strength is understanding how to communicate and trigger a reaction from a young audience — it’s something that fashion doesn’t understand nearly as well,” says David Fischer, founder and chief executive of streetwear and youth culture title Highsnobiety, which frequently works with rappers like Gucci Mane, Joey Badass and Cam’ron on branded content for fashion brands.

But as a “millennial state of mind” takes hold across society, changing the purchasing habits of all generations of consumers, hip-hop is not just about courting the youth. From teenagers lining up to buy the newest Supreme products to traditional luxury customers to the designers themselves, the music of Kanye West, Drake and Travis Scott is now resonating with a wide slice of people regardless of their demographics. Indeed, hip-hop now accounts for almost a quarter of all music consumption in the United States, with eight out of the 10 most popular artists of 2017 from the genre, according to Nielsen Music.

“Hip-hop in particular has always been an important influence in my life and my creative process,” says Alexander Wang, whose sportswear aesthetic has long attracted rappers — including Travis Scott, Vic Mensa and A$AP Ferg — and who has often cast hip-hop artists in his brand’s advertising campaigns. “I continue to be inspired by the genre as it evolves and touches all levels of society and forms of culture today.”

Content creation aimed at feeding the all-important social media feed is a big piece of the puzzle. “I would say 90 percent of my artists have their own creative directors, videographers and editing teams [that] get content out that day. That’s the secret sauce,” says Tammy Brook, founder and chief executive of FYI Brand Group, a brand strategy agency that for the past 17 years has connected companies with influential cultural figures, including rappers.

But as with any dialogue, it was not just the fashion industry that warmed to hip-hop. Rappers, too, have shifted their stance on the industry and the liberalisation of the hip-hop scene was key to the shift. “Hip-hop going mainstream happened a bit earlier, but it became more inclusive quite recently — it used to be exclusive and macho,” explains Fischer. “You now have everyone from queer rappers to female rappers and the market has become a lot less homophobic, which has also led to a lot more hip-hop artists feeling more comfortable with embracing fashion and vice versa.”

Rappers have long used designer fashion as a symbol of status, both in person as well as in their lyrics. Think: Migos’ Versace, Lil Pump’s Gucci Gang and Jay-Z’s Tom Ford. But as their influence grows, so, too, has their definition of personal style. Take A$AP Rocky’s 2013 hit “Fashion Killa” in which the rapper not only gives a shout out to luxury megabrands like Prada and Dolce & Gabbana but smaller in-the-know designers like Ann Demeulemeester and Visvim. “I admire Japanese and Belgian fashion designers because of their perspective, their approach to design and the execution, which is so advanced and different. It inspires me,” says A$AP Rocky.

But shoppers smell bullshit, so the minute it’s perceived as a marketing thing, it’s not going to work.

“That’s where the partnerships come in,” says Matthew Henson, who has been working with A$AP Rocky on the rapper’s fashion business (AWGE) since 2013. “Some artists offer a unique and valid point of view and can contribute to the overall growth and creativity of a brand. Designers are always inspired by music, art and social movements so if they align with a particular musician, then they collaborate there as well.”

And as much as fashion brands are leveraging hip-hop, rappers are using fashion houses to build their personal brands. But it needs to be authentic, says Brook. “The first thing [rappers] have to do to blow up in the fashion world is love fashion, this can’t be fake. You have to know about it and be part of the culture and community.

“Second thing is, you put them in a room (at shows, dinners and after-parties) with the Anna Wintours, the Carine Roitfelds, the Kim Jones, and you get them to a point where they’re credible enough and on the radar,” she continues. “Once they’re in the room, they’ve got to create a real connection that’s direct, because when designers decide who they’re going to put in their campaigns, it’s going to be the ones they really feel the connection with,” emphasises the brand strategist, who has enabled the deals between Travis Scott and both Saint Laurent and Helmut Lang; Big Sean and Dior Homme; Pusha T and Adidas and more. “Once that’s starting to organically happen, it’s about having a team so the world can see it in real time through digital media.”

It is a familiar trajectory also seen with A$AP Rocky, who starred in Dior Homme’s Autumn/Winter 2016 and Spring/Summer 2017 campaigns, after attending several Dior Homme shows the years prior. “That’s exactly the point, we don’t really look for them,” says Van Assche about Rocky, who impressed the designer through his extensive knowledge of fashion, as well as his personal style and taste. “They become obvious choices because of the relationship we construct with them. There has to be that personal connection.”

On the staying power of hip-hop’s influence within the fashion industry, Fischer says: “This is the new reality. [Rappers] are going to be the most influential brands in the future and if you want your brand to have any relevance with a young audience you need to embrace this, and you need to make it a general part of your strategy moving forward.” He pauses before adding a word of caution: “But shoppers smell bullshit, so the minute it’s perceived as a marketing thing, it’s not going to work.”