LONDON, United Kingdom — When Selfridges staged a large-scale Fendi pop-up last summer, ice cream, postcards and balloons helped to conjure up the energy of a traditional Roman piazza inside the upscale British department store’s Corner Shop, a concept space that’s part of the retailer’s £300 million bet on the power of brick-and-mortar shopping.

The investment is focused on a major, four-year renovation of the accessories hall in Selfridges’ London flagship, which was reimagined by English architect David Chipperfield and now spans 60,000 square feet, or about one-third of the Oxford Street store’s ground level. The project includes a new triple-height, art-infused entrance on Duke Street, a 4,000-square-foot eyewear destination and the Corner Shop, which has also hosted pop-ups with The Rolling Stones, Gentle Monster, Balenciaga and Chanel.

The UK’s looming Brexit has yet to dent luxury consumption in the country, buoyed by international visitors benefitting from a weak pound, and British rival Harrods also saw sales climb in the last year, reaching £862.5 million, up 4.6 percent. But Selfridges stands apart for its strong performance amidst fierce competition from online players and a slump in local consumer confidence.

Tellingly, the retailer cited accessories as a key driver of growth. The opening of major boutiques, including Louis Vuitton and Tiffany & Co. in its Birmingham store, provided an additional boost. And though Selfridges was late to the e-commerce game, digital sales also grew swiftly, bolstered by investment in a Chinese-language site, an Android app and a new unlimited delivery service.

But behind these moves is the underlying secret to Selfridges’ strength: a multi-pronged strategy rooted in a highly focused store network, a unique approach to the concession model and American entrepreneur Harry Gordon Selfridge’s founding insight that a modern department store must be a true destination; welcoming, entertaining and a social landmark.

Selfridges has physical advantages over rivals: it only has four brick-and-mortar locations, all situated in prime, densely populated areas across three UK cities: London, Birmingham and Manchester. This keeps focus and productivity high, which is one of the reasons why Selfridges was able to pour £300 million into the revamp of its Oxford Street store.

Selfridges has embraced a concession model, allowing brands to run their own shop-in-shops. Because brands typically manage their own stock and personnel with greater focus, the approach often outperforms the traditional wholesale model, according to retail analysts. The downside can be a disjointed and undifferentiated shopping experience, exacerbated by store operators who can sometimes act as little more than landlords. But Selfridges avoids this in a few ways.

For one, the retailer has forged strong relationships with its brand partners, encouraging them to be creative with their concessions and ensuring Selfridges gets the very best product, which labels typically reserve for their own flagships. Selfridges also blends concessions with its own product selections, often featuring young and unexpected brands, then knits everything together with entertaining pop-ups to create a seamless and curated customer journey that unites the economic benefits of concessions with a genuine sense of discovery.

I defy you to tell me what is operated by a brand and what we operate directly.

“The starting point has to be that nobody should know what’s concession and what isn't,” said Selfridges managing director Anne Pitcher. “I defy you to tell me what is operated by a brand and what we operate directly.”

“One of the challenges with a large format store like Selfridges is keeping it intimate, keeping it highly curated and not just a series of shop-in-shops for major brands — they’ve done both,” added retail consultant Robert Burke. “They’ve really nailed the importance of having a variety of brands: new brands and young brands, and fantastic pop-ups,” he continued. “They have not created a luxury ghetto, meaning that it is not just one big luxury brand after another.”

Alongside its dizzying array of goods, Selfridges also has an uncanny ability to sell the experience of shopping itself, which explains why the new marble-floored accessories hall in its London store comes with a 14-seat circular bar and a Japanese flower market.

“At Selfridges, you can buy flowers, have a glass of champagne, meet a girlfriend and walk around the space, which is architecturally enjoyable,” said Pitcher. “It makes you feel very different if you walk out with a beautiful bag, because you enjoyed everything around it.”

Enjoyment is hard to measure but according to Joseph Pine, business guru and author of “The Experience Economy,” time is the basic currency of experience and the more time your customers spend with you, the more money they will spend now and in the future.

Selfridges offers plenty of novel services like FaceGym, which delivers 30-minute “non-invasive facial workouts” that lift and sculpt the face. (In a sign that department store competitors are closely watching and trying at least some of what Selfridges is doing, Saks Fifth Avenue also opened a FaceGym on the new second floor of its New York flagship in June).

But one of the most important elements of Selfridges’ focus on experience is its food and beverage strategy. Sitting down for a drink or meal at any one of the retailer’s bars and restaurants certainly lengthens the time customers spend in its stores. 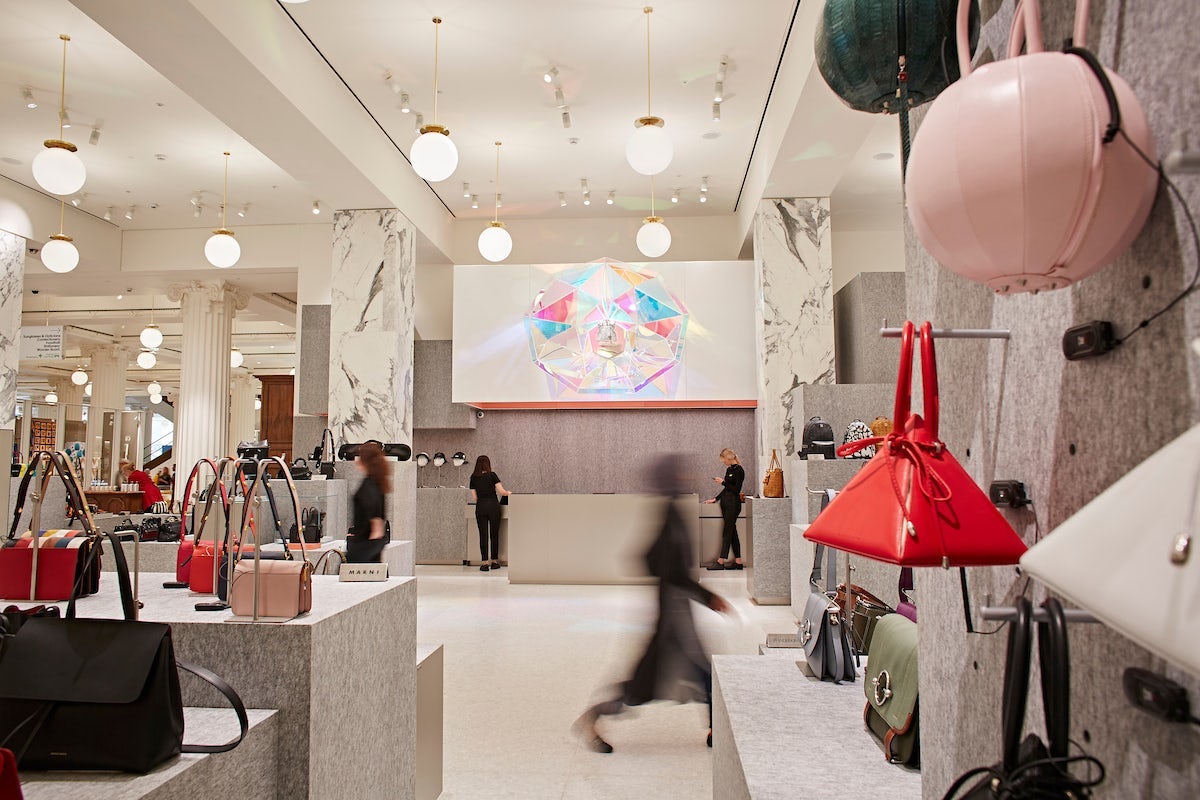 Food also plays to the heightened value of sensory experiences you can’t get online. “The role of a physical store must be to engage the senses. We've always had food at Selfridges and we are going to have even more and better food for eating, tasting, smelling,” said Pitcher. Then, of course, there’s the added benefit of a customer that has just had a glass of wine.

A savvy cultural radar is also crucial to the success of Selfridges, which has managed to be relevant to Millennial and Gen-Z consumers, who are expected to account for 45 percent of the luxury market by 2025, according to Bain & Company.

At the end of October, Selfridges is set to unveil a 20,000-square-foot space for men's streetwear that's been three years in the making and will feature Yeezy, Gucci, A Bathing Ape and Off-White, along with a bowl for skateboarding (much like Paris department store Le Bon Marché, which recently launched a skate-able structure). "We would like to say we are in touch with what is coming down the tracks," said Pitcher. In addition to streetwear, the retailer was also early to the clean and conscious living trends, partnering with the likes of Detox Kitchen and Canada Goose, which created exclusive fur-free jackets for the chain back in 2016.

Selfridges’ Body Studio is another good example of its ability keep up with the cultural conversation. The concept wraps together lingerie, activewear, swimwear, beachwear in a way that’s more in sync with the way modern women think about their bodies than a typical lingerie department. “When we set out to build a great destination for lingerie, we thought: let’s create a studio with a health cafe and a hairdresser and yoga and a whole conversation about your body, rather than just a place to buy underwear,” explained Pitcher.

It doesn't hurt that Selfridges is also one of the world’s most democratic and high-traffic luxury department stores, drawing 160 million visitors a year to its physical and digital channels. “It is not intimidating and exclusive,” said Burke, who noted its wide spectrum of products and prices.

“The world is welcome at Selfridges,” explained Pitcher. The company has been particularly successful at addressing international customers with translations, multilingual staff, foreign payment options, tax-free shopping services and digital tools that help visitors from abroad navigate its stores.

Then, there’s the power of what Pitcher calls “placemaking.” For all that’s percolating inside its stores, Selfridges is trying to think beyond its own walls, contemplating the neighbourhoods around its outlets and creating connections with local communities. “A physical store sitting in a neighbourhood with which it has no relationship is alien,” said Pitcher. 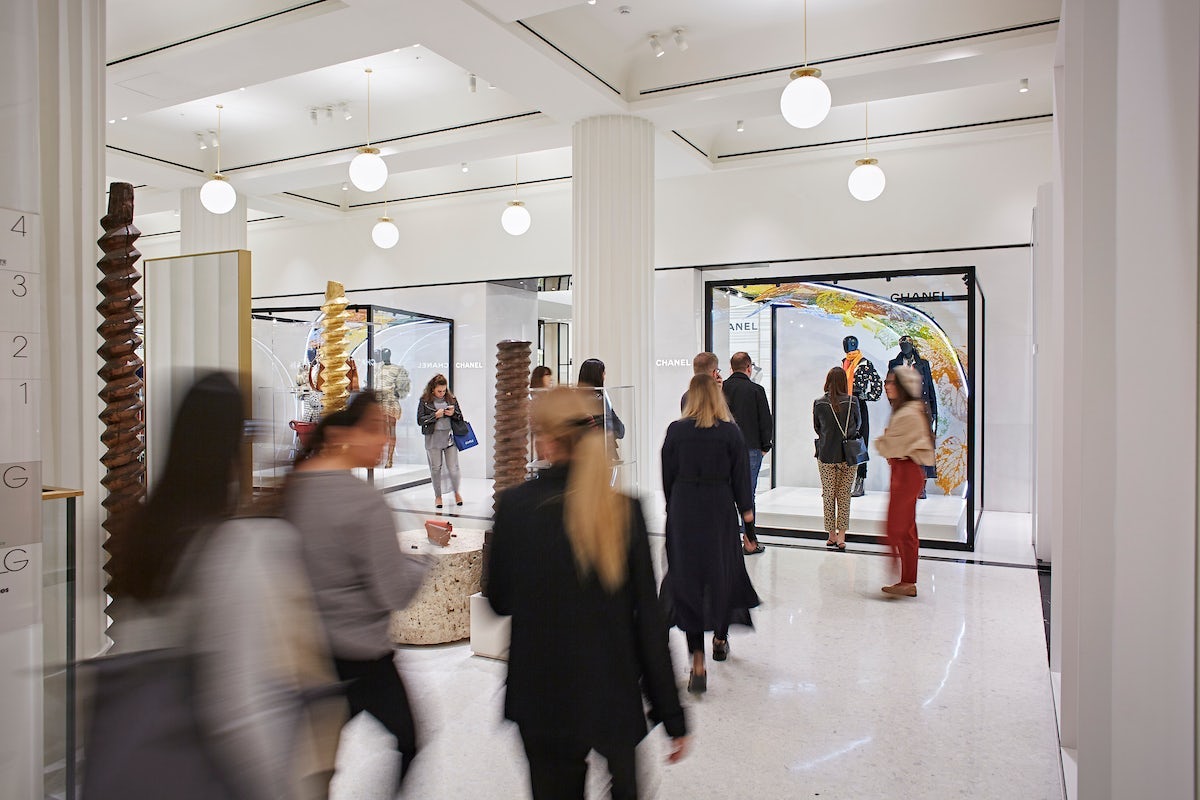 Selfridges is working closely with Crossrail, a large-scale public transport project in London that will shuttle millions of people to the Oxford Street area, many of whom will surely make their way to Selfridges. The retailer has also planted trees and built a marble bench and drinking fountain outside the new Duke Street entrance to its London store in a bid to create a plaza-like feel that is designed to both prettify the area and attract people to the store.

Last week, the retailer kicked off its rock n’ roll-themed holiday event — Selfridges Rocks Christmas — with a bang involving 85,000 baubles, 200 Christmas trees, a holiday cabaret and a series of elaborate window displays. “Selfridges is providing an experience even if you never walk into the store and you can see that specifically with these windows,” observed Burke. “There are people that won’t walk into the store, but Selfridges has already won them over. And in a year or two years, they might buy something from the food hall or meet a friend for a drink. That’s the win.”

And yet despite the strength of the strategy and the latest round of positive results, there may be limits to how much Selfridges can scale. Growth in its last fiscal year was slower than the 16 percent rise the retailer posted in the previous period. And while operating profit hit a record £181 million, that’s only slightly above the £180 million the company reported last year, meaning that margins fell and big jumps in sales may not be sustainable into the future.

There are clear advantages to the chain’s highly focused retail network, as well as longstanding questions as to whether its approach would translate to smaller cities in the UK should the company attempt to expand. But with only four physical stores, it’s clear that Selfridges must do more to boost its digital strategy.

According to Bain & Company, online luxury sales hit $27 billion in 2017, up 24 percent from the year prior, buoying the likes of Yoox Net-a-Porter, Farfetch and Matches Fashion. Selfridges cited strong digital sales in its recent results, but the company declined to disclose specific figures and its global e-commerce business still lags its Oxford Street flagship in revenue terms.

That said, the retailer has invested heavily in wooing international customers and a single visit to the Oxford Street store could drive multiple additional purchases online, if Selfridges was able to better integrate its physical and digital channels.

“The big challenge right now is whether we have the ability to fully integrate digital with physical and the answer is no, not yet,” admitted Pitcher. “However, when we've done that it will be a huge strength. This is the biggest challenge for any department store,” she added.

“Our roadmap to become an omnichannel player is well underway. The plan is securely in place.”