Having gained prominence as a creative consultant to Kanye West, Off-White founder Virgil Abloh is proving his three-year-old brand has the business chops to back up the buzz.

Having gained prominence as a creative consultant to Kanye West, Off-White founder Virgil Abloh is proving his three-year-old brand has the business chops to back up the buzz.

PARIS, France — “There is a new guard of designers that represent the luxury culture,” says Bosse Myhr, director of menswear and technology at British department store Selfridges. At the top of the list, alongside Shayne Oliver of Hood By Air and Demna Gvasalia of Vetements, is Virgil Abloh, the longtime creative consultant to Kanye West, whose streetwear-inspired, Milan-based label Off-White has attracted fans from Rihanna to Gigi Hadid and is set to show on the official Paris Fashion Week schedule on Thursday. But behind the buzzy brand, the 36-year-old creative director has also built a genuine business that’s generated triple-digit growth year-on-year since its 2013 launch. Indeed, according to Myhr, Selfridges has seen sales of Off-White surge by 100 percent between 2015 and 2016.

“In a large part streetwear is seen as cheap. What my goal has been is to add an intellectual layer to it and make it credible,” explains Abloh, whose label unites an edgy street aesthetic with luxury-level fabrication and positioning, tapping into the tastes of a generation of consumers for whom streetwear is just as fashionable as traditional luxury brands. “The consumer is already dictating what they prefer,” he adds. “Vintage Levi's are just as important as an Hermès bag and today they'll come together in the same outfit.” 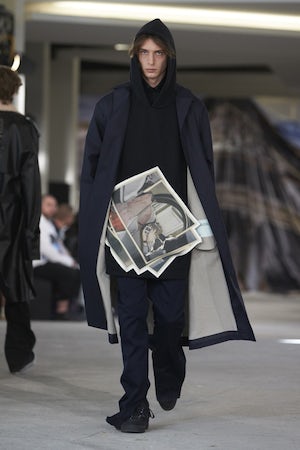 Paris Fashion Week can feel a long way from Rockford, Illinois, where Abloh grew up. He graduated with a degree in civil engineering from the University of Wisconsin, followed by a master’s in architecture from the Illinois Institute of Technology, where he first felt the pull of fashion. “OMA's Rem Koolhaas had just finished his [McCormick Tribune Campus] student centre, which later [along] with his relationship with Miuccia Prada piqued my interest and opened my gateway into fashion,” Abloh recalls.

In 2002, at the age of 22, Abloh became creative consultant to Kanye West and his creative “think tank” Donda, a role Abloh has held for the past 14 years, though he declines to explain how this happened and avoids going into detail on his work with West, which encompasses tour merchandise, album covers and set design, and certainly helped to catapult his name into the global consciousness.

In 2009, Abloh interned, alongside West, in the Rome headquarters of Fendi. Soon after, he began building his first label, Pyrex Vision, which he debuted in New York in December 2012. The brand, which initially sold custom screen-printed Champion t-shirts ($225) and vintage Ralph Lauren flannels ($550), quickly gained a cult following, in no small part due to Abloh’s design partnerships with famous artists like West and A$AP Rocky. From the start, Pyrex attracted influential retailers like Colette (Paris), Union (Los Angeles), GR8 (Tokyo) and Storm (Copenhagen), and was sold next to luxury labels like Balmain, Céline and Givenchy.

“We saw kids from Harlem presenting Rick Owens and Raf Simons in a different way that connected directly to culture and Pyrex Vision became the aesthetic of that,” Abloh says. “[Until then] high-fashion was dictating what was happening in culture and for the first time that had been reversed by this generation of influential kids. That, in turn, affected the market.”

Pyrex Vision, which Abloh says he voluntarily shuttered in 2013, laid the groundwork for his next project: Off-White, a brand launched in September of the same year that blended a streetwear aesthetic with a more upmarket positioning. “With fashion you have to choose if you're high-end, contemporary or streetwear, men's or women's," explains Abloh. "Off-White is between black and white, there is no choice. It’s the idea that I wouldn't decide, which relates more to the consumer.”

In a large part streetwear is seen as cheap. What my goal has been is to add an intellectual layer to it and make it credible

“I remember that moment Nicolas Ghesquière did the 'Join a Weird Trip' collection for Balenciaga and that connected to the street in the same way that a Supreme box logo t-shirt did. People want that no matter what season it is and at that moment I saw myself in high fashion,” he adds. “Once I noticed that high fashion was using a pacing and terminology with consumers of carry-over items, that struck a cord.”

Since launch, Off-White has attracted a global following (the label has 569,000 followers on Instagram, in addition to the 600,000 more on Abloh’s personal account). The label has also earned a spot on the official Paris Fashion Week schedule for both its men’s line and women's collection, which debuted for Spring 2014. The label, which was also named a finalist in the 2015 LVMH Prize, now employs 14 people and has attracted over 220 stockists, including Selfridges, Barneys New York, IT Group, Colette and Net-a-Porter. Abloh declined to reveal current revenue figures, though he says sales grew by 100 percent last year. Thirty percent of the label's sales now come from North America; 40 percent from Europe, the Middle East and Africa; and 30 percent from Asia-Pacific. Off-White recently opened a standalone store in the Aoyama district of Tokyo, bringing the label's global retail network to five stores, including its shop-in-shop at Selfridges. By the first quarter of 2017, Abloh aims to double this number, opening new stores in New York, Toronto, Shanghai and Seoul, as well as a second store in Hong Kong.

“We have had resounding success so far as sales have exceeded our expectations with items selling out as soon as they go online,” says Lisa Aiken, fashion director of Net-a-Porter, which picked up the brand starting with its last Pre-Fall collection. “Sweatshirts ($580), t-shirts ($350) and track pants ($520) are part of our most popular categories, making up around half of our overall sales [of Off-White].”

Only a year ago Off-White's womenswear accounted for a mere 10 percent of the company's turnover. But Abloh has his sights set on the women's opportunity and today that number has risen to 30 percent. (He expects 50 percent of the label's sales to come from womenswear by 2018.) 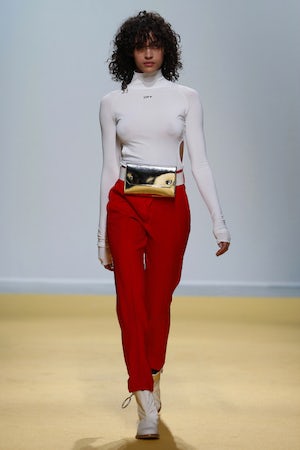 “We had Virgil's very first collection before Off-White — Pastelle — and then Pyrex [Vision] from the beginning,” says Colette founder and creative director Sarah Andelman, who started stocking Abloh's work 12 years ago. “Off-White was first a collection for our ground floor, with other streetwear brands. Then in a very organic way it became a [luxury] fashion brand for our first floor,” she adds. (Pastelle was a streetwear line developed by Abloh with Kanye West in the mid-2000s that never officially got off the ground, though select stores like Colette sold these items for a short time. The long-defunct line is thought to be making a comeback under West protégé Ian Connor.)

On October 20, Abloh will debut an exclusive 19-piece menswear capsule collection with Matches Fashion and, in 2017, plans to stage an exhibition and embark on a hotel collaboration, adding to a range of side projects like his furniture range, his DJing and his periodic forays into product design, including stationary, books and iPhone cases.

So what's the secret to his success?

“What Virgil does really well is cross-platform messaging. He realises he is his brand and it's in everything he does, from his DJ name being Flat White to wearing his products in public and connecting with young influencers who also wear his product," says Jian DeLeon, senior menswear editor at WGSN. "In addition to being inspired by youth culture, he remains an active part of it. Whereas Kanye West said 'Listen to the kids,' Virgil is actually out there with them.”

But Abloh aims to broaden his appeal. “I'm not going to choose between the mother or the teenager. It's a more wide open and less specific thing that I'm banking on,” he says. It seems the creative director also has his sights set on something even bigger: shaking up a major European luxury brand.

“The end goal is to modernise fashion and steer a [fashion] house, because I believe in the modernisation of these storied brands,” he says, referencing the arrival of Alessandro Michele at Gucci and Demna Gvasalia at Balenciaga. “I want to prove this new iteration of fashion and use Off-White as a case study for these new ideas that relate to current consumers, because at the end of the day it's an industry I believe in.”