TOKYO, Japan — Pierpaolo Piccioli is producing some of the most beautiful fashion collections in the world: majestic, but modern. Last week, the Valentino designer won critical acclaim for his Pre-Fall 2019 show in Tokyo — the brand’s first co-ed outing — at which red carpet-ready tulle, silk and chiffon gowns sat comfortably with elegantly tailored menswear, dressed-up denim and T-shirts and sweatshirts emblazoned with prints by Japanese photographer Izumi Miyazaki.

“There was the DNA of Valentino proposed in a way that was charming, modern, super light, and actually we love this kind of combination between something that is coming from the past and talking to the new generation,” said chief executive Stefano Sassi.

But despite the winning creative, 2017 sales results — 1.16 billion euros ($1.38 billion) — were up only 7 percent year-on-year. This puts the storied Italian label, owned by secretive Qatari investment vehicle Mayhoola, only slightly ahead of the wider luxury market, which expanded by 5 percent last year according to consultancy firm Bain & Co, and far behind heavyweights like LVMH, which grew its luxury fashion and accessories category by 13 percent in 2017. 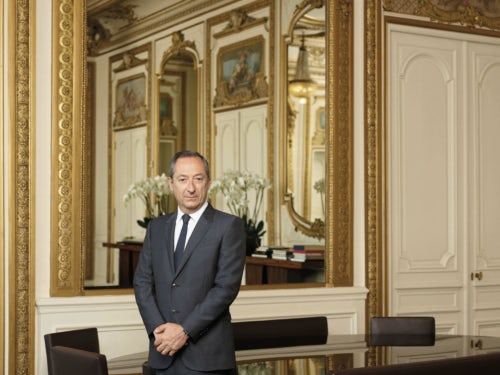 “Today, Valentino is the size of a second-level luxury company, but we are in a position to be successful in the market,” said Sassi. “We need to evolve; we need to grow.”

“We are facing a situation where brands can grow to an unbelievable size. I’m not sure if that’s the case for Valentino,” he cautioned. “The pace of growth and the timing of growth will depend on the success of our product, organisation, communication and so on.”

An underdeveloped accessories business is probably the single greatest affliction — and future opportunity — for Valentino. Handbags and shoes, which offer favourable retail economics, characterised by high sales productivity per square foot and strong full-price sell-throughs, could be a powerful lever of growth for the brand, which is overly dependent on high-end ready-to-wear, a category that has a limited audience and is harder to make profitable.

“Similarly to Versace, Valentino is at the top of the luxury ‘food chain.’ Couture and ready-to-wear are the most expensive product categories out there,” noted Luca Solca, head of luxury goods at BNP Exane Paribas.

And while Valentino found success with its signature “Rockstud” shoes and sneakers, the look is now tired and Sassi admitted the label has been slow to seize opportunities in handbags, a lucrative opportunity for luxury players worth $50 billion last year and set to grow by 8 percent annual through 2025, according to data from Research Cosmos.

Valentino is a long-term pillar in the strategy of Qatar and Mayhoola, and can be an opportunity to enlarge their presence in the luxury industry.

China, too, remains an under-tapped opportunity for Valentino. While Chinese nationals account for more than 50 percent of total sales revenues at some major luxury fashion brands, Valentino has been slow to exploit the market. Sassi declined to reveal the precise percentage of sales coming from Chinese consumers but said it was less than 50 percent.

By contrast, menswear is a bright spot. Started from scratch in 2012, Valentino’s men’s business has grown to around 200 million euros a year, or approximately 12 percent of total revenues, according to Sassi, with Piccioli carving out an elegant and well-defined niche in a sector increasingly swamped with streetwear-inspired looks.

“Men’s is something we have developed quite recently but I would say, in terms of message, it’s very clear, very sharp,” said Sassi. “It has been successful for this reason and it keeps growing in double digits and I think this will continue.”

Unsurprisingly, digital is another area of focus. According to Bain, e-commerce will account for 25 percent of all luxury sales by 2025 and Valentino recently signed onto Alibaba's Luxury Pavilion, opening a digital flagship on the platform to coincide with its Tokyo show. Last year, the label signed with Yoox Net-a-Porter to boost its digital strategy. Meanwhile, its current footprint of 180 physical stores is set to grow by five to ten new locations a year, said Sassi. 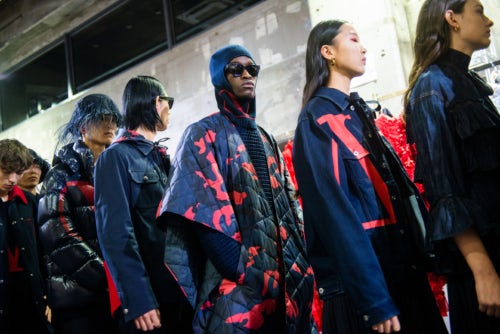 Valentino is a regular fixture on the annual Pambianco Strategie d'Impresa list of Italian companies ripe for a public offering. In 2017, the company topped the table for the fashion and beauty sector. But Sassi said there were no plans for a Valentino IPO in the near future.

“It was a potential project that we evaluated three to four years ago,” he explained. “The company is generating cash and we have no need as of today to go back to this project. The focus today is to keep evolving the plan to bring the company to another level of size.”

There are also rumours that luxury group Kering — which owns high performers Gucci, Saint Laurent and Balenciaga — has expressed interest in Valentino. The label could certainly be an appealing acquisition, given its scale and brand positioning. And although Valentino has grown year-after-year since partnering with Mayhoola, which also owns Balmain and Anya Hindmarch, some suggest that the brand could do better under the umbrella of a major conglomerate with a larger portfolio of luxury houses.

“Valentino is clearly an appealing target for luxury groups like Kering and LVMH, which can exploit great synergies in production, distribution and marketing,” said Mario Ortelli, managing partner at advisory firm Ortelli & Co. “Also, American fashion groups like Capri Holdings and Asian conglomerates can be interested in this unique asset.”

But Sassi batted away the idea of a deal. “It’s obvious that in a moment like this one, in which the French conglomerates are very cash rich, there is the opportunity and there is noise around that. But Valentino is a long-term pillar in the strategy of Qatar and Mayhoola and eventually can be an opportunity to enlarge their presence in the luxury industry.”

Indeed, if Mayhoola is interested in building a bigger presence in the luxury industry, as they have consistently insisted, offloading Valentino would seriously undercut their ambitions, making any sale unlikely unless the investment vehicle with links to the natural gas-rich state of Qatar and that country's royal family unexpectedly needed to raise money.

"Our shareholder has stated from the very beginning that it is a long-term shareholder and this is pretty credible considering it’s from one of the families, one of the states that is financially well-managed and rich, so I don’t think they have any need to consider selling Valentino," said Sassi.