Global fashion players are increasingly aligning themselves with dominant Chinese technology platforms, which are consolidating their power over the country’s online luxury market.

Global fashion players are increasingly aligning themselves with dominant Chinese technology platforms, which are consolidating their power over the country’s online luxury market.

This week, Alibaba scored a major coup by signing Net-a-Porter onto Tmall’s Luxury Pavilion platform. The Richemont-owned e-commerce portal, the biggest online luxury fashion website by sales, will sit on the Luxury Pavilion, which is available through Tmall, and Alibaba will take over operations of Net-a-Porter’s Chinese app and help launch a Chinese version of Mr Porter, the luxury retailer's menswear sibling. To date, customers in China have only had access to an English-language version of the men's site.

The latest move signals several truths about China's fast-moving online luxury market. For one, the already powerful e-commerce platforms operated by Alibaba and JD.com are further consolidating their power in the luxury space. For Alibaba, scoring a deal with what is arguably the world’s most prestigious online luxury player is a big victory in its ongoing battle with arch-rival JD.com, which pumped $397 million into luxury fashion marketplace — and Net-a-Porter competitor — Farfetch last year.

The deal also puts pressure on the few remaining sceptics who refuse to partner with China’s e-commerce giants. Luxury executives like Gucci’s Marco Bizzarri — who earlier this month at the BoF China Summit remained steadfast in his decision to stay away from platforms like Alibaba’s Tmall — could start to feel more isolated. Going it alone increasingly looks like a tough sell in China’s fast-growing online luxury market. And while there are very legitimate concerns about counterfeits and ceding control to Chinese conglomerates, for more and more luxury players, the motto now seems to be: "If you can’t beat them, join them."

Yoox Net-a-Porter chief executive Federico Marchetti was quick to take to social media in the minutes following the announcement of Richemont’s Alibaba deal. “Winning in the Chinese luxury market means thinking big,” Marchetti posted on Instagram. But the bigger story seems to be that even the established e-commerce giants of Europe now have to plug and play into a much bigger digital ecosystem if they are to reach their potential in the Chinese market.

China’s major e-commerce platforms have made major strides in luxury e-commerce over the past 18 months. And since Richemont acquired YNAP for €2.7 billion (a little over $3 billion) in May of this year, the e-commerce group has made no secret of its desire to partner with a local player in order to grow its China business. YNAP has long seen great potential in the Middle Kingdom, but it hasn’t managed to break through with great success, despite several efforts at entry and revitalisation.

Yoox made its first foray into Chinese e-commerce in 2010 via the launch of Emporioarmani.cn, and followed with other own-brand sites and Yoox.cn in 2012. That same year, Net-a-Porter acquired Chinese luxury e-commerce player Shouke.com, which was relaunched as Theoutnet.cn, a Chinese-language version of Net-a-Porter’s discount sister site. That site was then integrated as a Chinese-language section of the global Theoutnet.com site in 2015 to the dismay of Chinese consumers, who complained the global site lacked integrated customs tariffs clearing and local payment options.

Of course, 2015 was also the year of the merger between Yoox and Net-a-Porter, creating the world’s largest fashion e-tailer. But even being the world’s biggest online luxury player didn’t seem to give the group a leg-up in China, where it struggled to localise and lure consumers away from dominant Chinese e-commerce platforms.

As e-commerce sales in China topped $1 trillion in 2017, international luxury brands still remained underrepresented on the country’s big digital platforms, which were driving much of the momentum in the Chinese online luxury market. According to Gartner L2, only 24 percent of luxury brands had official stores on Tmall (Alibaba’s B2C e-commerce platform) and only 10 percent operated them on JD.com as of June 2017.

The big shift in luxury e-commerce in China occurred when the two dominant B2C platforms, Tmall and JD.com, turned their attention more aggressively to the space with the launch of specialised platforms Toplife, a standalone app launched by JD.com in June 2017, and Luxury Pavilion, an “app-within-an-app” accessed by invite only through Alibaba’s Tmall platform, first launched in August last year. YNAP is the latest of more than 60 partners to align with Luxury Pavilion in its 14 months of existence.

The attraction for these brands is obvious: Alibaba’s pool of 600 million potential customers, closer alignment on anti-counterfeiting efforts across its platforms and access to the tech giant’s famed big data operation.

On the flip side, the move into luxury is, in many ways, a sensible evolution for Alibaba and JD.com, which already have dominant positions in the wider consumer market. In 2018 Alibaba’s platforms, which include Taobao and Tmall, will account for 58.2 percent of all retail e-commerce sales in China, while JD.com will capture a 16.3 percent share, according to Emarketer. But the blockbuster quarterly growth now expected by shareholders could only be sustained by growing average spend per transaction.

Conveniently, this pivot came not only as Chinese consumers were re-embracing luxury with a vengeance — figures from Bain & Company put luxury market growth in China up 20 percent last year — but also as the central government, which had been central to the country’s luxury downturn, following President Xi Jinping’s 2012 crackdown on conspicuous consumption, encouraged consumers to “upgrade” their consumption, in order to help move the Chinese economy away from its traditional manufacturing and exporting base towards a consumer-led model.

The scene is certainly set for blockbuster online luxury growth in China, with more than $20 billion of luxury goods sold in the country last year and e-commerce currently accounting for more than 28 percent of retail sales (and growing) in the country. What also now seems certain is that international players are increasingly positioning themselves to capitalise on this growth by aligning with dominant Chinese technology players — the only ones with meaningful market share, local knowledge and the logistical networks to make it happen. 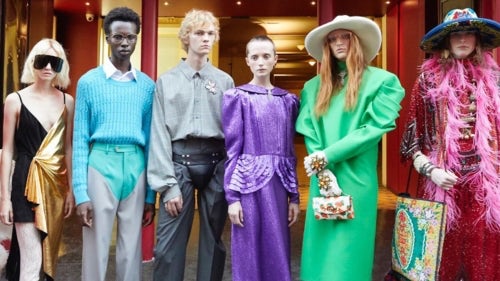 Strong sales growth at Gucci helps Kering beat forecasts. The French luxury conglomerate said revenue reached €3.4 billion in the third quarter and increased 27.5 percent on a comparable basis. Sales growth had been expected to slow more sharply from 31.5 percent a quarter earlier to the 22.5 percent rise forecast in a poll of analysts by Inquiry Financial. Shares in the group, which had been particularly hit in the past three months over worries Gucci was running out of steam, were up 8.2 percent.

Puma lifts outlook as basketball launch goes well. Third quarter sales rose a currency-adjusted 14 percent to €1.242 billion ($1.42 billion), while operating profit was up 28 percent to €130 million, beating average analyst forecasts for €1.2 billion and €119 million respectively. Puma saw sales rise almost 16 percent in the Americas in the quarter and 23 percent in Asia, showing little of cooling in the region even as concerns grow that a trade war will curb spending by Chinese shoppers.

Ferragamo shares jump as widow's death sparks takeover talk. The death of Wander Ferragamo has prompted speculation that her heirs may eventually sell their stakes in the Italian luxury shoemaker. The shares, which peaked in 2015, rose as much as 8.8 percent. She was a key member of the family shareholders who controlled the company, opposing any sale after the company was floated on the Milan stock exchange in 2011. While the brand has struggled to keep up profitability, it might still be attractive to buyers. 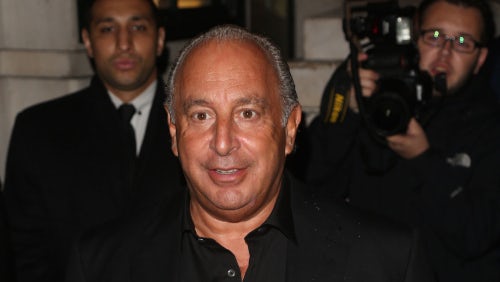 Sir Philip Green named in Parliament as the businessman at centre of Britain's #MeToo scandal. The Topshop owner was identified by Lord Hain, the former Leader of the House of Commons, after two days of speculation over the name of the man behind the injunction. The former Labour cabinet minister said that he had been contacted by someone “intimately involved in the case” and felt a “duty” to reveal the name using parliamentary privilege. Following Lord Hain’s comments, there were calls for the billionaire to be stripped of his Knighthood and for a crackdown on the use of non-disclosure agreements by “serial offenders.”

Christopher Raeburn joins Timberland. He joins the VF Corporation-owned brand as global creative director. Raeburn, who also helms his namesake label, will share his time equally between his own brand and Timberland. He will be based in his London studio and his first collection for Timberland will be Autumn/Winter 2020.

Marine Serre, Richard Quinn and more nominated for Fashion Awards 2018. The nominees have been revealed ahead of the December 10 ceremony at London’s Royal Albert Hall. They include household names such as Alessandro Michele for Gucci and Demna Gvasalia for Balenciaga to emerging designers like Craig Green, Martine Rose, Rejina Pyo and Samuel Ross for A-Cold-Wall*.

Amazon shares dip after sales miss. The e-commerce giant reported sales that missed analysts’ estimates, and issued a disappointing revenue forecast for the busy holiday quarter, suggesting it may be reaching a saturation point in the US. Revenue gained 29 percent to $56.6 billion in the third quarter. Analysts’ projected $57.1 billion. Sales will be from $66.5 billion to $72.5 billion in the current period, falling short of analysts’ average estimate of $73.8 billion.

Mytheresa launches kids. The Neiman Marcus-owned e-tailer is kicking off children’s clothing sales with 35 brands, including capsule collections from Gucci and Dolce & Gabbana. The new offering is targeted at existing Mytheresa customers, 40 percent of whom have children.