First came a collaboration with the Roman fur and leather house Fendi, followed by a partnership with Los Angeles-based Anti Social Social Club. But it was the company’s tie-up with billion-dollar streetwear juggernaut Supreme that really made a splash.

Now, Arnault is about to drop what could be one of Rimowa’s biggest product collaborations to date: a pair of transparent polycarbonate suitcases created in partnership with Virgil Abloh’s haute streetwear sensation Off-White.

“At LVMH, we have a saying that we like to be between tradition and modernity. Rimowa is a 120-year-old brand and what we’re doing with Virgil is a great example of modernity,” explained Arnault, who first teased the collaboration on his personal Instagram account in September 2017 and will officially debut the resulting product on June 20 at Off-White’s Paris menswear show.

The move comes as more and more luxury brands are tapping the cultural energy and business model of streetwear to stay relevant with millennial customers, who drove 85 percent of luxury growth last year and increasingly demand newness and novelty.

“Maybe there’s a bit of fatigue from customers of traditional brands and they’re excited by fresh products done in a different way and this is something that’s really well embraced by streetwear,” said Arnault. “One collaboration in itself won’t be a key sales driver, but ultimately the social media value of them is extremely important for driving awareness and desirability.” 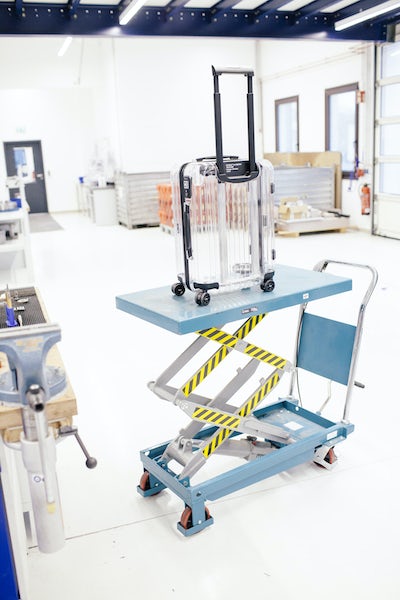 Rimowa will follow the Off-White initiative with a partnership with Parisian streetwear label NasaSeasons. But Arnault says he isn’t planning to continue product collaborations at this pace. “You’ll see us come with collaborations for sure but not all in the same space or at the same scale every two months. I’m very cautious of one collaboration too many.”

Abloh said suitcase he created for Rimowa is transparent in order to let consumers participate in the design process, much as he has with some of his recent sneaker designs for Nike.

“It’s like 3.0 of personalisation. It’s not just putting your initials on it but allowing another layer to come in play,” he explained. “There’s an emotional component to owning [the suitcase] and you become a performance art piece just by using the thing. It’s like putting your items on display and rethinking the premise of a product.”

But although the worlds of streetwear and luxury are undoubtedly merging as part of a wider generational shift, Arnault is quick to note that quality will remain a long-term marker of authentic luxury goods. “The thing that changed is the way luxury goods are perceived, marketed and distributed,” he explained. “But people are willing to pay a premium if we know a product comes from a trusted brand with quality craftsmanship — that won’t change.”

It’s like 3.0 of personalisation. It’s not just putting your initials on it but allowing another layer to come in play.

“Heritage, quality, craftsmanship and authenticity from the preceding generation of luxury, that’s valuable. Those things won’t waver,” agreed Abloh, “But being a part of the new era is the halo effect, the cultural attachment and relevance. Married in the right way you have the future of how a brand can be one-part luxury from the preceding generation and coveted by the next generation. That’s the unique fit going forward.”

Abloh’s ability to bring his streetwear-infused aesthetic to a major European luxury house will be put to the test later this month when he shows his debut collection for Louis Vuitton.

“What you’ll see with what Kim and Virgil are doing at Dior Homme and Louis Vuitton isn’t the most streetwear-inspired collection — you’re not walking into a skate shop,” hinted Arnault. “They also have to adapt to codes, quality criteria and brand DNA.”

Editor's Note: This article was revised on June 5, 2018. A previous version of this article misstated that Rimowa's collaboration with Off-White included two suitcases with the words 'PERSONAL' and 'BELONGINGS' emblazoned on them. This is incorrect. These models were first teased on Alexandre Arnault's personal Instagram but will not go into production.

Disclosure: LVMH is part of a group of investors who, together, hold a minority interest in The Business of Fashion. All investors have signed shareholders’ documentation guaranteeing BoF’s complete editorial independence.30

What’s Next for Virgil Abloh?