The announcement follows a similar move by Proenza Schouler designers Jack McCollough and Lazaro Hernandez, who in January revealed their decision to show their Pre-Spring and Spring collections together. In the case of Proenza, the label is set to show during Paris Couture Week, an increasingly popular choice for wholesale-focused businesses. The trend was pioneered by Vetements and also adopted by Rodarte, which have both aligned the presentation of their main lines with the lucrative sales period for pre-collections, when buyers spend about 80 percent of their budgets. All of this underscores a fashion system in flux, as well as the cost, complexity and creative drain of creating and staging standalone pre-collection collections for smaller brands.

It’s miles away from the approach taken by luxury megabrands like Chanel, Dior and Louis Vuitton, who, in recent seasons, have invested millions of dollars in elaborate Cruise shows staged in off-piste locations, beyond the noise of traditional fashion weeks, to generate dedicated media coverage, activate regional markets and engage top-spending clients with unique experiences.

Gucci, too, has previously invested in spectacular Cruise shows held in locations like New York’s Chelsea neighbourhood, where the brand took over an entire city block, and the 13th-century cloisters of London’s Westminster Abbey. This year, Gucci was rumoured to have cancelled its Cruise outing. But the speculation was untrue and the brand’s 2018 Cruise show is set to take place this Monday evening at the Pitti Palace’s Palatina Gallery in Florence, Italy, as part of a wider cultural project with the Uffizi Gallery and the city of Florence to which the brand is donating €2 million.

Then there’s the case of Valentino. On Tuesday, the brand staged its first Cruise show in New York, presenting a powerful ode to the city’s Downtown scene. Despite a front row packed with high-wattage celebrities, Valentino opted for an overall production that was much simpler, inviting about 200 guests to a sunlit loft with exposed brick walls. Somewhere between the emerging labels abandoning standalone Cruise shows altogether and the megabrands which continue to invest up to $10 million into each show, Valentino’s approach suggested something of a third way.

While it doesn’t take into account the value of engaging top clients, measuring social media mentions and impressions is one way to gauge return on investment for Cruise shows. According to data from Brandwatch, a social-media monitoring and analytics firm, there were more than 124,000 mentions of Dior on key social platforms Twitter, Facebook and Instagram during the week of it latest Cruise spectacular. Meanwhile, the hashtag #DiorCruise had over 145 million impressions, with #DiorCruise2018 adding 17.4 million more.

Gucci’s latest 2018 Cruise show has yet to happen. But according to Brandwatch, during the week of last year’s Westminster Abbey spectacle, which also generated much debate in the popular press on the propriety of staging a commercial fashion show in one of England’s most famous churches, Gucci racked up 138,000 mentions on Twitter, Facebook and Instagram. During the same period, the hashtag #GucciCruise had more than 296 million impressions, a blockbuster performance.

By contrast, during the week of Louis Vuitton’s Kyoto outing, thought to be amongst the most expensive of this season’s Cruise shows, the brand earned a mere 70,000 social media mentions and the hashtag #LVCruise had about 128 million impressions, according to Brandwatch. Vuitton’s performance was perhaps handicapped by the absence of more mainstream celebrities and the specificity of the aesthetic vision. Indeed, just compare Vuitton designer Nicolas Ghesquière’s relatively obscure (albeit sophisticated) show location, lesser known celebrity front row and blend of inspiration — from samurai armour and Kabuki to the films of Akira Kurosawa — to the easy Wild Western tropes of Maria Grazia Chuiri’s collection for Dior, shown outside Los Angeles before brand ambassadors and mega-celebrities Charlize Theron and Rihanna.

As for Valentino, its Cruise show was only staged a few days ago. But from May 23 (the day of the show) to 5:30pm EST on May 25, the brand was mentioned only 8,000 times on social media, according to Brandwatch. This compares with around 12,000 mentions during the week of June 15 to June 22 in 2015, when the brand launched its 2016 Cruise collection without a show at all.

And yet, the number of social media impressions tells another story. While Valentino doesn’t appear to have used a brand-specific hashtag for its recent Cruise outing, making accurate data harder to come by (and raising questions on digital marketing execution), during the period just after the show, the more general hashtag #Resort18 had more than 52 million impressions, compared with only 2.9 million impressions during the same period in 2015. This suggests there may be some merit to the brand’s quieter approach, but still underscoring the power of creating a moment by staging a show even for brands that don’t have the resources to go big.

American Eagle is said to have made a bid for Abercrombie & Fitch. American Eagle has reportedly teamed up with private equity firm Cerberus to make a joint bid to acquire its long-time rival Abercrombie & Fitch. The potential deal, which would have a market value of around $3.5 billion, indicates an accelerating trend toward challenged brands seeking growth through consolidation, as seen with Coach Inc.'s recent acquisition of Kate Spade & Company. In a separate announcement, Abercrombie & Fitch announced a loss of nearly $62 million in its first quarter.

Tiffany & Co. posts surprise sales decline. Shares in the luxury jeweller fell by 6.6 percent in early trading on Wednesday, after the company posted an unexpected sales decline in the first quarter of 2 percent. Analysts had expected a 1.7 percent rise. The company blamed its results on "lower spending by both foreign tourists and local customers." Tiffany is in the midst of a turnaround, as it attempts to address long-standing problems within its business by focusing on younger consumers. Its CEO Frederic Cumenal left in February, and has been temporarily replaced by chairman Michael Kowalski.

Mulberry embraces fashion immediacy. The British fashion house will not hold a runway show at London Fashion Week in September, as it transitions to a direct-to-consumer sales model with "see now, buy now" shows. Mulberry follows Burberry, Tommy Hilfiger and Ralph Lauren in adopting the strategy, a decision it hopes will drive engagement and increase relevance to customers. The brand will hold private appointments with press in London and Paris during fashion month, before returning to the schedule in February 2018.

Topshop Australia enters into voluntary administration. Austradia, the Australian arm of British fashion retailer Topshop announced on Wednesday that it had appointed voluntary administrators to oversee the business. The news comes just six years after Topshop launched in Australia, reflecting the tough trading conditions facing retailers and rising competition posed by online giants like Amazon. On Thursday, Topshop's British parent company Arcadia was reported to be in talks to take over control of the Australian business.

Swiss watch exports fall in April. Exports of Swiss watches fell by 5.7 percent to $1.57 billion in April, the Federation of the Swiss Watch Industry said on Tuesday, raising concerns that a recovery for the industry will take time. Shipments have been negative in 21 of the past 22 months, hurt by weakness in the key markets of Hong Kong and the US, though LVMH and Swatch have indicated that the worst may be over.

G-III and PVH sign licensing agreement for DKNY. The two companies announced a new licensing agreement on Monday, which will see PVH, the company that owns Calvin Klein and Tommy Hilfiger, develop a new DKNY brand, DKNY Sport for Men. The first collection will debut in Spring 2018. Since G-III closed the deal for its acquisition of DKNY in December 2016, it has unveiled a wholesale-focused strategy that flies in the face of current direct-to-consumer retail trends, signalling its intention to focus on driving sales in the short term. 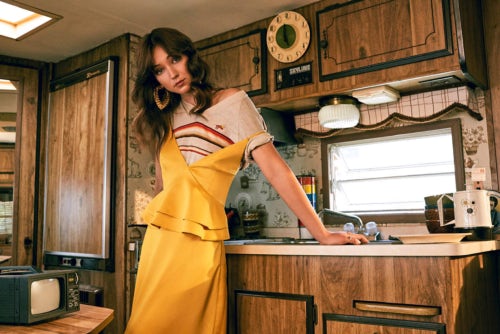 Nasty Gal relaunches under Boohoo ownership. Having acquired Nasty Gal for $20 million in February, Boohoo is ramping up its efforts to bring the clothing brand back from the brink, hosting the Governors Ball pre-party on June 1. Boohoo says adding Nasty Gal to its portfolio will help it dominate e-commerce at the youth end of the market, particularly in the US, which accounts for almost 14 percent of its overall business.

Italian fashion designer Laura Biagiotti passes away. Laura Biagiotti, Italy’s “Queen of Cashmere,” has died at the age of 73. Her daughter, Lavinia Biagiotti Cigna, the vice chairman of the Biagiotti group, confirmed on Friday her mother suffered a heart attack Wednesday evening at her estate outside of Rome. Biagiotti was one of Italy’s first female designers to run a global fashion house.

JD.com is to develop stronger delivery drones. One of China's biggest online retailers, JD.com, has announced plans to develop drones capable of carrying a tonne or more for long-distance deliveries. The announcement comes as e-commerce and logistics companies are increasingly experimenting with drone delivery, including Amazon, which made its first delivery in December to a customer in England.

Facebook signs multiple deals for upcoming video service. The social media giant has signed deals with a number of news and entertainment content creators, including Vox Media, BuzzFeed and ATTN, to make shows for its upcoming video service, according to a report on Thursday. The move represents the latest effort from Facebook to attract more advertising dollars, amid competition from other social content channels like Snapchat Discover.