TOKYO, Japan — Luxury menswear is having a moment around the world. Two high-profile designer appointments on the men’s side of LVMH — Kim Jones at Dior Men and Virgil Abloh at Louis Vuitton — have certainly given the menswear calendar a boost.

But the shift goes much deeper. “There is definitely a trend of men wanting to create their own style, their own personality, their own look,” said Pietro Beccari, chairman and chief executive at Christian Dior Couture. “In the last ten years, there has been a trend of individualisation and an awareness of style, and I think the markets all over the world have been growing for men’s and the trend is not stopping.”

Now, Dior Men is building on the momentum by taking its show to Tokyo — the capital of the world’s third-largest luxury market and the spiritual home of men’s fashion in Asia — with a special Pre-Fall menswear presentation on November 30 and a Summer 2019 menswear pop-up opening two days earlier. According to Mario Ortelli, managing partner at advisory firm Ortelli & Co., a pivot to Asia from luxury menswear brands such as Dior Men makes perfect sense, given that the growing appetite for high-end menswear is even more acute here than elsewhere in the world.

“There is a growing demand for casual and fashionable menswear especially among younger consumers, who are especially present in Asia,” he said. “It is not surprising that fashion houses… are looking at Asia as a big opportunity for their menswear business and they are increasing their marketing and distribution effort in that region.”

According to Beccari, Dior’s decision to do an off-piste show for its Pre-Fall menswear collection was driven by a desire to signal the growing importance of menswear to the house, while the choice of staging the presentation in Japan was motivated by Jones’ long-time affinity for the country — especially its deep and innovative streetwear scene.

Also important to the calculus was Japan’s long-term strategic importance to the luxury business, which is about its influence on Chinese shoppers who turn to the country for style cues and shopping trips, as much as domestic luxury goods consumption.

More than a quarter of all visitors to Japan in September this year came from Mainland China (Greater China, including Taiwan and Hong Kong, accounts for almost half of all visitors with an average spend of three times that of visitors from other countries), according to figures from Japan’s National Tourism Authority.

At the same time, Japanese consumer confidence and retail sales are both looking positive on the back of strong domestic demand for luxury. In 2017, Japan’s luxury segment grew 4 percent with revenue increasing in the majority of product categories and retail channels, according to a recent study by Leoni Corporate Advisors (LCA).

Japan is an important market for us and on top of that it’s a hub for all of Asia.

“Japan is an important market for us and on top of that it’s a hub for all of Asia,” said Beccari. “Lots of Chinese are traveling there; Tokyo is preparing for the Olympics; it’s a vibrant city, more so now that the economy is doing well, so that’s why I was happy to go along with [Kim’s] proposition.”

For his part, Jones pointed to Mr Christian Dior’s love of Japan, which is reflected in many pieces in the house’s archive, as a nice synergy with his own long-time fascination with the country. In mining these archives, Jones adapted Japanese influences, originally used in womenswear collections, for what he calls a “modern way” of menswear.

“What he did was based on a lot of tailoring and it makes sense for [the way men dress] now,” Jones explained. “The [Dior] archive has a lot of things that are celebratory and uplifting and joyful, but also elegant and sophisticated, so I’m looking at tailoring and elegance that’s a little bit more relaxed because that’s how men like to wear clothes now.”

Japan has been a menswear leader for decades, with tastemakers around the world, but particularly in Asia, taking their cues from the streets of Tokyo neighbourhoods like Harajuku and Shibuya. Concurrently, local menswear brands have, in many ways, emerged as the backbone of Japan’s home-grown fashion scene. 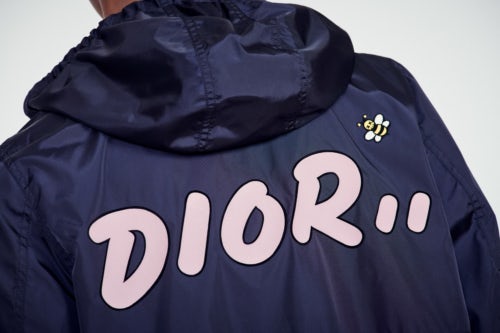 According to Akiko Shinoda, director of international affairs for Japan Fashion Week, this development has meant menswear shows have routinely outnumbered their women’s counterparts on the official schedule of Amazon Fashion Week Tokyo.

“People in Japan’s men’s fashion industry learned a lot from the elegant European suit styles, as well as the American denim casual style. Research on both of them was so deep and so geek, then combined with original street culture to give birth to a unique, high-quality men’s fashion scene,” she explained.

Jones, who has spent a great deal of time in Japan, agreed that this mix across styles and sectors is key to the country’s unique appeal when it comes to menswear. “There’s a certain freedom there when people wear clothes… the way of design and the mix of design at different levels is really interesting,” he said.

Japan’s influence on Chinese shoppers may be waning, however. According to Peter Xu, a fashion influencer in China with a long history working with international luxury brands, young consumers are increasingly likely to look elsewhere in Asia for style inspiration. “The Japan impact has been less because of the Korean impact. But some of the culture is still visible, for example, in the arts scene, with Yayoi Kausama and Murakami,” Xu said.

And yet Japan is set to remain an important luxury shopping destination for global brands. “The young people are embracing Off-White and Balenciaga. I recently went to Tokyo and saw lots of Chinese kids shopping. For them, it’s more about a global look now.”