Luxury brands are stepping up their presence in the gateway to Latin America, but can Miami carry their weight?

Luxury brands are stepping up their presence in the gateway to Latin America, but can Miami carry their weight?

MIAMI, United States — This week, Art Basel Miami Beach and Design Miami will play centre stage in what is one of the wealthiest cities in the world. These two annual events attract a global surge of buyers, sellers, celebrities, creative industry hotshots and hangers-on to Miami’s golden shores. But this art and design pilgrimage — now followed religiously by luxury brands like Hermès and Louis Vuitton — represents just one of many waves of travellers, tourists and part-time residents who make the city’s fashion market ebb and flow like no other.

“Basel coming to Miami made us a more serious city,” says Jackie Soffer, co-chairman and chief-executive of Turnberry Associates, whose family has owned and operated the upscale Aventura Mall, just north of Miami Beach, since it opened in 1983. “[Now], the quality of our museums is strong; there’s the New World Symphony; and we have a lot of important architecture.”

Once associated as a port city — ideal for beach-seeking tourists and retirees — Miami is flourishing culturally, attracting international residents and other transients who are more interested in art, food and shopping than they are in spring break, string bikinis or the seedy echoes of Miami Vice. “It used to be, if you came to Miami and you wanted to go out for a meal, you’d have a choice of three restaurants. Now, you’d have to come to Miami for a month or two months [just] to eat out everywhere,” Soffer says.

As the most prominent city in Florida, also known as 'the Sunshine State,' Miami has become a pied-à-terre for Latin American business moguls, a playground for the international jet set, a global banking hub and a destination for holidaymakers of all sorts. For most fashion retailers reliant on these passers-through and snowbirds, the major shopping seasons are more significant to the bottom line than in other US markets.

The tides of travel retail

Art Basel Miami Beach, which begins on December 3, is “bigger than Christmas,” says Roma Cohen, who owns the pioneering Miami fashion boutique Alchemist with his wife, Erika. It is one of several periods during the city’s calendar of events and attractions that keep fashion sales buoyant. Other peaks include the holiday season, the Miami Boat Show in February and Miami Swim Week in May. 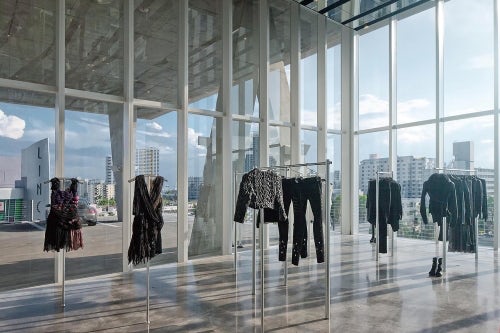 The arrival of Art Basel to Miami Beach 13 years ago coincided with an increase in spending power among the BRIC countries. Russians and Brazilians, as well as the wealthy from myriad Latin American locations, began flocking to Miami not only for vacation, but for shopping and second homes. By the end of the aughts, two multi-brand boutiques had emerged in South Beach.

In December 2008, there was Alchemist on Lincoln Road, which features custom-made furniture by Zaha Hadid and goods by Chrome Hearts, Rick Owens and Hood By Air. In 2009 came the Webster on Collins Ave., French merchandiser Laure Hériard-Dubreuil’s colour-coordinated concept shop, which features Chanel and Céline alongside Saint Laurent and Givenchy. Both have since expanded: The Webster to Bal Harbour, a good 45 minutes from its Miami Beach location, and Alchemist to the Design District.

"Miami is a city of people coming and going," says Hériard-Dubreuil. "We have a lot of the Miami Heat [basketball team players]; there's a lot of celebrities and recording studios. A lot of athletes are practicing here because of the weather and [there are bankers] at the headquarters of South American and Latin American banks here too, [so] we have this mix of chic sportswear [but] a more preppy clientele as well.”

It is no coincidence that stores like these opened during the throes of the recession, when real estate was undoubtedly more affordable and tourist-driven retail sales were on the rise. As the US economy stabilised, however, tourism has continued to play a crucial role in Miami’s retail economy. Greater Miami welcomed 14.6 million overnight visitors in 2014, a 2.4 percent increase from the previous year, with an average stay of six nights. Those tourists spent $23.8 billion in 2014, up 4.4 percent from 2013. What’s more, international tourists accounted for 70 percent of that $23.8 billion. And experts believe those numbers have increased in 2015.

“If you look at the hotel occupancy rates, they are as strong — if not stronger — than last year,” says Joseph Sitt, chief executive of Thor Equities, a real estate development and investment firm with a significant footprint in Miami. “It’s showing good resilience and that’s a great litmus test.”

It is difficult for retailers in Miami to determine how much of their sales are generated by foreign-born customers, mainly because many of these shoppers own second homes in the area, and therefore are registered as “local” in the system. Aventura, for instance, estimates that just 25 percent of its customers are tourists — who make up 40-50 percent of the dollar spend — while the Bal Harbour shopping mall north of Miami estimates that 80 percent of its business derives from tourists. 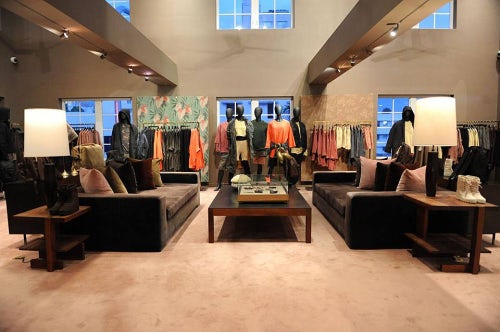 The disparate numbers between the two could be attributed to the difference in customer profile. While Aventura, which benefits from being closer to Fort Lauderdale than its other Miami-area competitors, leases space to luxury brands such as Louis Vuitton and Dior, one can also shop at specialty retailers like Anthropologie.

However, with the slowing of the economies of Brazil and Russia, some of Miami’s biggest spenders are no longer around. 732,884 Brazilians visited Miami in 2014, down 3 percent from the year previous. Visitors from Argentina dropped 12 percent to 427,043 and Venezuelans by 15 percent to 347,381. Yet, other Latin American nationalities with significant visitor numbers to Miami like Colombians, Mexicans, Chileans and Peruvians were up, according to a report by the Greater Miami Convention and Visitors Bureau.

Miami did benefit from Europeans stopping by in August 2014 on their way to the FIFA World Cup in Rio de Janeiro. Tourists from that region increased by 7 percent last year. However, given the weakness of the Euro, it remains to be seen whether Miami can maintain those sort of numbers from Europe in 2015 and 2016.

Thor Equities’ Sitt, for one, remains confident in the market despite the slowdown of some foreign shoppers. “Some of the things that people had concerns about in Miami actually ended up being unwarranted,” Sitt says. “All the damage has been done that would have been done. If you go down the key streets, there is vitality. Even on [South Beach’s] Lincoln Road, there are a number of tenants that are strong performers on the lower margins of luxury.”

With a GDP of $281 billion, Miami is only the twelfth largest metropolitan statistical economic area in the country, relatively small when compared to New York ($1.5 trillion), or even Chicago ($590 billion). But this number belies the power and wealth of the city since it is restricted to the somewhat arbitrary line of the city limits where only a half million people live, according to a 2013 report by the US Census Bureau.

The greater metro area has a population of about 6 million and includes several wealthy enclaves like West Palm Beach. In fact, 28 of Florida's 42 billionaires live in the region and Miami itself ranks as the sixth most important city in the world for the ultra-wealthy, according to a report by Knight Frank.

A new centre of gravity

Three years ago, not unlike many of its fellow upscale brands, Hermès abandoned its space at the Bal Harbour shopping center for a temporary store in the still-developing Design District. It was a risk leaving the 50-year-old luxury stalwart. Bal Harbour generated an average $3,010 per square foot in sales in 2014, more than any mall the United States, according to research firm Green Street Advisors.

But early indicators suggest that the move to the Design District has paid off. According to industry sources, the opening day of its new permanent location on November 5 was the best-ever sales day for the luxury brand in the US. 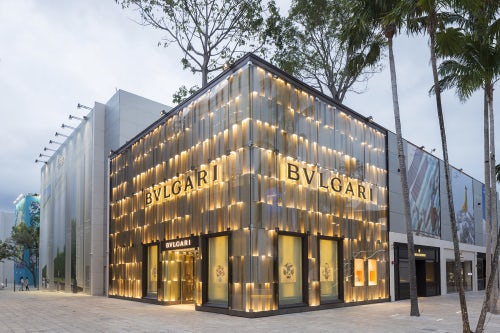 The Design District is a once-downtrodden neighborhood that real estate developer Craig Robins, through his company Dacra, has spent the last decade positioning as the city’s next great upscale shopping destination, with more than 120 stores set to open there by the end of 2017. Christian Louboutin, Marni and Maison Margiela were early residents. Loewe, Burberry and Louis Vuitton have followed suit, while Loro Piana and Dior are among the brands scheduled to bow within the next year.

“Because of all the creativity that’s here, [the Design District] is definitely a place where brands can feel free to break out of the normal mode,” Robins says. “In a mall, it’s very hard to give that feeling of being special.”

Along with Art Basel events, Design Miami, and public artworks by John Baldessari and Buckminster Fuller on display, the neighbourhood plays home to the De la Cruz Collection Contemporary Art Space, as well as chic eateries and a growing creative community. And the Design District is just one facet of the transformation Miami has undergone in the past decade.

The Wynwood Arts District has welcomed accessible luxury brands including Shinola and Del Toro, as well as the Rubell Family’s contemporary art collection and the Wynwood Walls, which commissions graffiti and street artists from the world over to create works on the neighbourhood's warehouses.

Downtown Miami, largely ignored by beachgoers in the past, is getting its own shopping mall with the Brickell City Centre, a $1.05 billion mixed-use project. Co-developed by Swire Properties alongside mall giant Simon and the Whitman Family, which owns and operates Bal Harbour, the mall — set to open at the end of 2017 — will feature brands including Valentino and Giuseppe Zanotti as well as restaurants and hotels, with Saks Fifth Avenue as its anchor.

“With one of our biggest stores already well positioned in the Bal Harbour Shops, complemented by another very successful store in the Dadeland Mall, our Brickell location addresses the evolving landscape of the Miami marketplace and solidifies our strong presence in South Florida,” says Saks chief executive Marc Metrick.

But it is still unclear to some whether or not the Miami economy can sustain so much upscale retail. Developer Matthew Whitman Lazenby, who runs Bal Harbour shops as the chief executive of the Whitman Family Development, says the family’s Brickell City project is a “world’s away” from the customer that visits Bal Harbour.

The local market for Miami-based fashion brands with a global appeal is also expanding. Along with Del Toro, which was founded in 2005, there is Alexis, a women’s ready-to-wear label run by the mother-daughter team Alexis Barbara Isaias and Ana Barbara, and Style Mafia, a cheap-and-chic collection launched by the Venezuelan blogger and Miami resident Simonett Pereira. Each label boasts a robust wholesale business outside of the city.

It is not difficult to understand why designers living in Miami would be able to woo a global customer. The city’s proximity to Latin America — not to mention its significant Cuban and Hispanic communities — has given Miami an international flair from the beginning. But it continues to have some of the limitations of other regional cities in the US.

“Miami is still very raw. There is an unbelievable amount of potential, but retail is very difficult right now,” says Chevellard. “Los Angeles and New York have the infrastructure to support new brands. Miami is still very much just the satellite location of other things.”

Yet, some of the world’s biggest luxury brands are ready to elevate the city to top retail tier by building larger boutiques and expanding their product offering.

“Someone doesn’t walk into the Miami stores and think, ‘I still need to go shop in a larger city’,” says Robert Chavez, Hermès chief executive for the US, a day before the new shop’s opening. “This is just as good as any of [our stores] in other major international cities.”