August turned out to be a drama-free month this year, much to the relief of investors.

LONDON, United Kingdom — August turned out to be a drama-free month this year, much to the relief of investors. The Savigny Luxury index (“SLI”) traded in a narrow band this month, ending short of 2 percent lower, whilst the MSCI World Index (“MSCI”) ended half a percent up. The sector’s current woes and glum outlook for 2016 seem to be already priced in. Professional investors’ relief is palpable, August being a month prone to catastrophic events (Lehman’s agony, stock market crashes of 2011 and 2015).

By and large, results painted a picture of contracting sales, although profits stayed the course. Only Coach (recovering), Brunello Cucinelli (still catching up) and Estee Lauder (re-energised strategy) showed growth. Nevertheless, there were some hidden gems in the results, notably Tiffany’s better-than-expected profits and a hint by Prada that the company may finally be turning the corner.

Hong Kong retail sales contracted for the seventeenth consecutive month. Watch and jewellery sales continued their spiral descent, resulting in the erstwhile coveted luxury shopping destination losing its crown to the USA as the Swiss watch industry’s largest export market. There’s even talk of high street brands setting up camp in the island’s luxury malls as Chinese consumers trade down the luxury pyramid.

Brexit Britain benefitted from a bump in sales as the pound’s devaluation pulled tourists in this summer. There was a 7 percent year-on-year increase in tourism spend in July, according to Global Blue data. Spending by Japanese tourists almost doubled from a year earlier. Will luxury players adjust their prices in stores?

Corporate activity ground to a standstill in August.

The US retail landscape is gloomy. Department stores are in the doldrums as shoppers go online and brands push own retail. The department store format has not kept up with the times and is losing out to specialist retailers. In comparison their European counterparts seem to be doing much better, with the likes of Selfridges and La Rinascente keeping their stores fresh and exciting. Are there lessons to be learned? 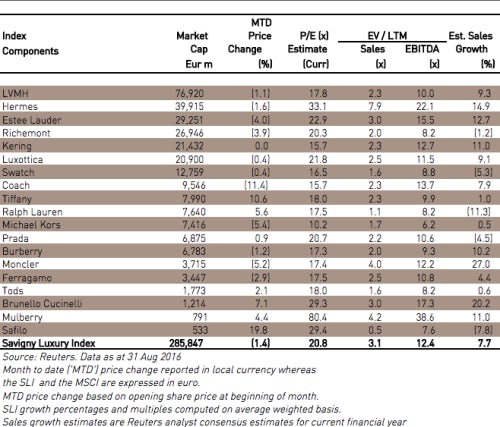