In this month's Market Pulse, a set of impressive results by the French luxury conglomerate kickstarted 2019 with a note of optimism.

LONDON, United Kingdom — Rihanna and LVMH are reportedly in talks to extend their runaway success in makeup with Fenty Beauty to fashion. The pop star introduced a lingerie line — also under the Fenty name — last year, but speculation that she would launch a high-end fashion range with the French luxury conglomerate emerged after she was spotted wearing a pair of sunglasses bearing the Fenty logo. If the reports are true, Rihanna would become the first black woman designer at LVMH.

LVMH’s latest results turned the tide in favour of luxury goods, with investors momentarily shaking off fears of a slowdown in growth in China along with the anxieties surrounding Brexit and US-led trade spats. The Chinese market seems alive and well, with both Burberry and Tiffany reporting an increase in sales in mainland China in otherwise underwhelming results announcements. Not so much for Swatch Group however, which reported slowing sales in China in the last quarter of 2018 — but then, the watch sector has its own cycle. Closer to home, the mood continues to be subdued, with most companies announcing results this month pointing to weakness in Europe, particularly in France, owing to the Yellow Vest protests.

Burberry is once again a step ahead of its luxury peers in digital. The brand increased its Instagram and WeChat followers by 1 million last quarter thanks in part to a high-profile holiday marketing campaign, starring the likes of Kristin Scott Thomas, M.I.A. and Matt Smith, which reached more than 57 million viewers. The brand’s B Series limited edition flash sales introduced by Riccardo Tisci are also proving very successful on social media channels, especially in China. This millennial-friendly sales tool has been used successfully by streetwear labels as well as makeup brands, but luxury brands have remained shy of it.

Meanwhile, French beauty and wellbeing group L’Occitane has agreed to acquire London-based skincare company Elemis for a cash consideration of up to $900 million, implying a multiple of 22.5 times Elemis’s expected EBITDA for 2018.

The Savigny Luxury Index (“SLI”) ended the month up for the first time since last August: its healthy gain of 7 percent was nonetheless shy of the MSCI’s gain of close to 8 percent. 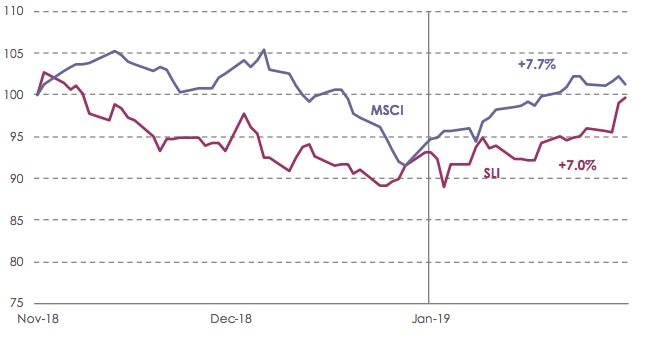 This month’s share price rally feels a little premature. Economic uncertainty and centrifugal forces still plague a politically divided Europe and the overall geopolitical situation continues to be tense. Whether the recent positive growth numbers from mainland China were a one-off effort of Chinese customers spending less abroad and more at home, or should give cause for renewed optimism in this key market, remains to be seen. The next few months could prove to be a rocky ride for investors as further snippets of trading information from luxury goods operators trickle through. 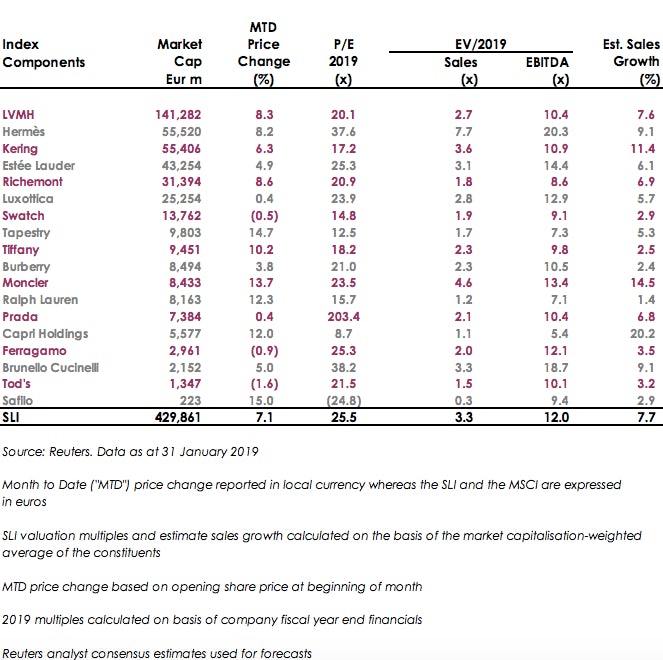