This month, the SLI tumbled in the face of deteriorating trade talks between China and the US, compounded by a devaluation of the yuan and continued pro-democracy protests in Hong Kong.

LONDON, United Kingdom — Trump is building a virtual wall between the USA and China by imposing a 15 percent tariff on previously nil-duty imports from China as of 1 September. This will impact an additional $300 billion worth of annual imports to the USA. In response, China has allegedly allowed the yuan to devalue beyond RMB7/US$1 for the first time since the global financial crisis 11 years ago.

Protesters have also been on the streets in Hong Kong for the past 12 weeks demanding more autonomy from China. While the impact of tariff increases and a cheaper yuan have not yet flowed through to company results, as demonstrated by Brunello Cucinelli and Estée Lauder’s strong performance in mainland China over the last six months, the protests in Hong Kong are starting to bite.

Prada and Tiffany both pointed to a slowdown in this key market during their results announcements; July saw the biggest decline in retail sales in Hong Kong since February 2016, resulting in calls for landlords to slash rents by 50 percent for a period of up to six months. Prada’s landlord in Causeway Bay announced that the rent on the soon-to-be-vacated flagship will be cut by 44 percent in a bid to attract a new tenant.

This all paints a gloomy outlook for luxury goods sales in the region, prompting brokers to issue warnings about a turn for the worse for the sector in the second half of 2019.

News of Barneys going bust is causing ripples in the US department store sector. Only a few years ago, trend-setting Barney’s was considered by luxury brands as one of the hottest doors to be in. Some say this led to a certain level of complacency by the operator, notably a lack of willingness to change its business model to reflect market developments.

Nevertheless, a 72 percent hike in rent at its flagship Madison Avenue store, combined with an expensive venture in New York’s Chelsea, led Barneys to file for chapter 11 bankruptcy protection this month. US department stores have been struggling for a while, and the jury is out as to whether Barneys’ bankruptcy has unwittingly set off another trend.

Corporate activity has been particularly quiet this month, with only one deal of note: Tod’s founder and majority shareholder Diego Della Valle raised his voting stake in the company to 81.2 percent and is said to be considering taking the company private.

The Savigny Luxury Index (“SLI”) ended the month down more than 4 percent, driven mainly by a deteriorating outlook for mainland China and Hong Kong, not to mention the continuing Brexit mess and a potential slowdown in the US. The MSCI did not fare so well either, dropping almost 2 percent. 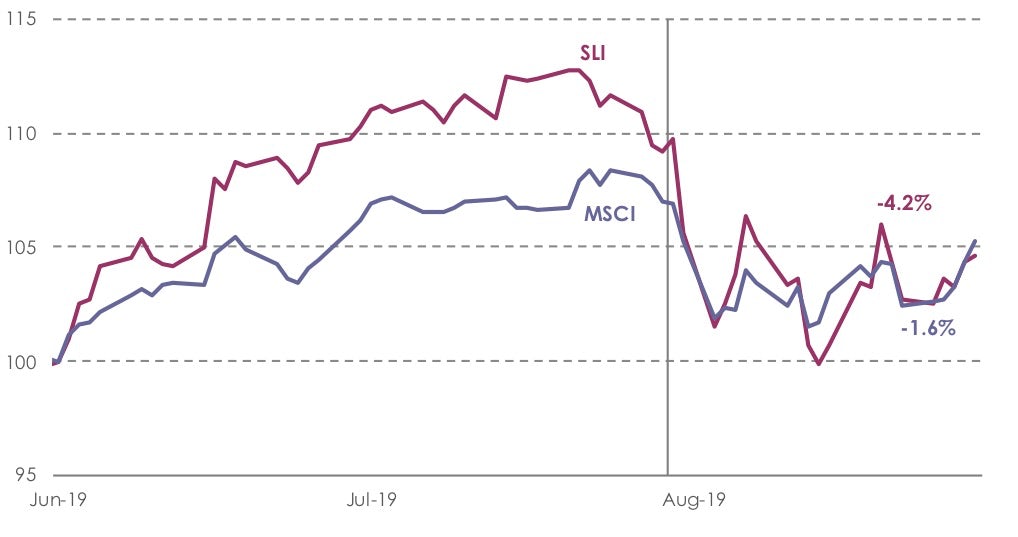 • Affordable luxury fashion players in the US were hit hard this month. Tapestry, Capri Holdings and Ralph Lauren lost 33 percent, 26 percent and 15 percent of their market capitalisation respectively this month.

• Tiffany and Richemont, both highly exposed to mainland China and Hong Kong, both lost about 10 percent of their value in August.

The next few months are going to be critical from a geo-political perspective. The escalating trade tensions between the USA and China are now having a concrete impact on the luxury sector. The continuing protests in Hong Kong, despite the extradition bill having been shelved for good, are creating an increasing malaise in the region.

Lastly, Brexit under Boris Johnson is turning into a soap opera: defections, rebellions, dismissals and the first resignation of a minister ever in order to spend less time with his family. This level of uncertainty is terrible for both consumer and investor confidence. 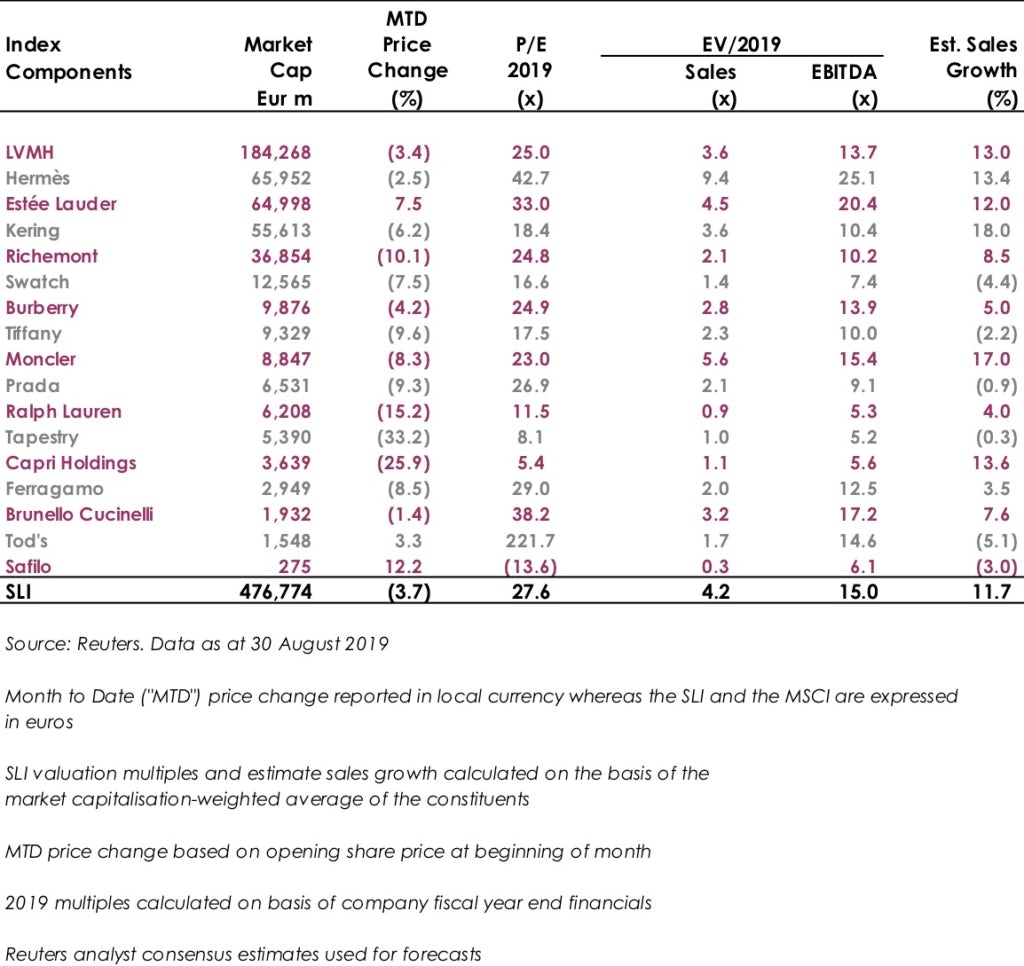