The selling tsunami which immediately followed Brexit has left the Savigny Luxury index lost at sea this month.

LONDON, United Kingdom — The Savigny Luxury index (“SLI”) continued its downward trend, dropping a further 2 percent this month, this time joined in its misery by the MSCI World Index (“MSCI”) which fell almost 1 percent.  The selling tsunami that hit stock markets on Brexit day has left our SLI lost at sea.

Brexit was shocking enough news but various politicians’ rolls of the dice left the UK political scene in shambles and the country potentially facing the biggest constitutional crisis in modern history.  Stock markets plunged around the world, notably the FTSE which registered a steeper one-day fall than at the height of the 2008 financial crisis.  This has had a knock-on effect on our SLI, which is now trading at 9% below its level at the beginning of the year.

On the corporate front, it has been more good than bad in an otherwise quiet month.  Kors, Gucci and Mulberry impressed the markets with strong results and outlook.  On the negative side there was talk of restructuring and job cuts at Ralph Lauren, whilst Ferragamo warned that this year was more about risk management than growth.  The Swiss watch sector continued its downward momentum, to the point that the erstwhile issue of scarcity of watch components may now farcically turn into an issue of over-capacity — as is already the case for finished movements.

Mergers and acquisitions activity stepped up a notch this month with French fashion brand Balmain being added Mayhoola’s stable of luxury brands, at a price tag of almost €500 million; Investcorp acquired a 55% stake in Italian menswear brand Corneliani, investing alongside the founding family, and valuing the business at around €90 million; Revlon acquired beauty company Elizabeth Arden for approximately €700 million.  Finally, Swiss watch components manufacturer Groupe Acrotec was acquired by Castic Capital in an MBO valuing the company at around €200 million.

Brexit’s impact on the luxury goods sector still has to play out.  The short term outlook will be governed by currency fluctuations: this may create opportunities for some of the brands, notably British ones, but the reality is that this will only make current choppy trading conditions more challenging.  The Eurozone has been in crisis for the last couple of years and Brexit has caused a ripple effect amongst the so-called populist factions in many countries, some of which (notably France and Germany) have elections coming up.  Such uncertainty does not bode well for our Euro-centric sector. 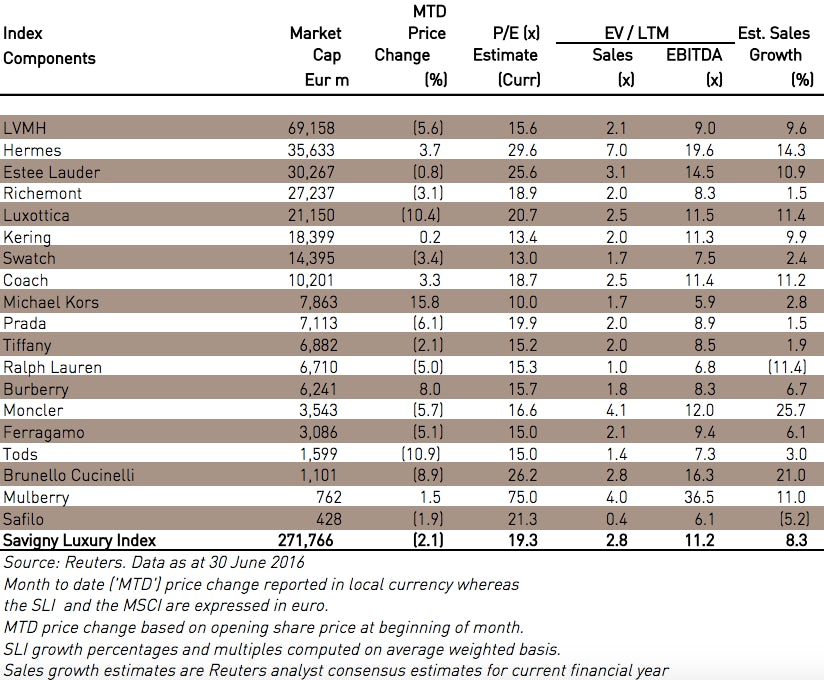 #BoFLIVE: The Fate of Luxury Retail