Market Pulse | A Boost in Confidence

The Savigny Luxury Index (“SLI”) leapt by 6.7 percent this month, overperforming the MSCI World Index (“MSCI”) by almost six percentage points, as luxury sector investors seem to have received the reassuring they needed from a number of positive signals, reports Pierre Mallevays of Savigny Partners.

• Industry leader LVMH adopted a positive stance in its recent results announcement. The acceleration in revenue trends at Louis Vuitton and a more favourable view on the cognac market in China have helped rebuild confidence.

• An easing of restrictions on inbound Chinese travel has led to more Chinese consumers travelling and buying luxury goods overseas, mitigating the slowdown in local demand.

• More positive news from Hermès, which posted a 13 percent growth in sales, significantly higher than the sector average of 6-8 percent. The understated style of its products and more exclusive positioning has helped it weather the crackdown on corruption in China.

• Swiss watch exports rose in December and January, hinting at a pickup in demand in China. Swatch Group CEO Nick Hayek expects double-digit growth this year on the back of an improvement in Chinese demand. He says that consumption from “normal” people has now overtaken that of government officials. With its Longines and Tissot brands, Swatch has good exposure to the mid and entry price segment.

• Michael Kors’ share price jumped nearly 23 percent from an already lofty valuation on the back on much better than anticipated quarterly earnings as third-quarter revenue increased 51 percent in North America and more than doubled in Europe.

• Tiffany also enjoyed a boost of more than 12 percent, the market expecting margin improvement from the decrease in the price of silver.

• The weak sales and earnings momentum affecting Tod’s since last summer continued to delay any share price recovery. Tod’s was down another 2.4 percent this month.

Whilst topline growth prospects have reassured investors, luxury groups remain cautious about their bottom line given recent adverse currency effects (appreciation of euro versus dollar and versus yen). Both Hermès and Louis Vuitton have announced double-digit price increases in Japan this month to counter the yen’s weakness. Other brands are bound to follow. Will sales be hurt as a result? 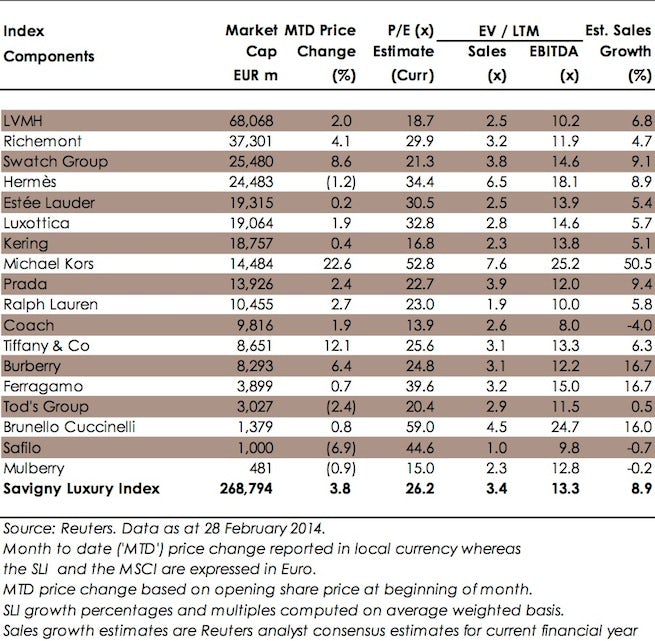