The Savigny Luxury Index has gained good ground in September and is up by 3.7 percent, outperforming the MSCI World Index by over one percentage point, as Asian tourist flows to Western fashion hubs remain strong and the world's largest luxury conglomerates snap up young designers, reports Pierre Mallevays of Savigny Partners.

LONDON, United Kingdom — The Savigny Luxury Index (“SLI”) has gained good ground in September and is up by 3.7 percent, outperforming the MSCI World Index (“MSCI”) by over one percentage point, as Asian tourist flows to Western fashion hubs remain strong.

• It is consecutive fashion week time in key fashion capitals and the trend has been a race to get a piece of young designers. Less than a year after acquiring Christopher Kane, Kering invested in New York-based Joseph Altuzarra. Not to be outdone, LVMH snapped up Nicholas Kirkwood and JW Anderson in quick succession. The big luxury groups are investing in smaller fashion brands, something they had not done since the turn of the millennium.

• Chinese consumers continued their shift away from ostentatious and logo-centric purchases, owing to both an increasing level of sophistication and the government’s crackdown on conspicuous gifting. Prada has benefitted from this trend and is among the few to have reported solid growth in China in its first half results.

• M&A activity continues to be buoyant. In addition to the designer deals mentioned above, Neiman Marcus was bought back in an MBO, Chinese conglomerate Fosun International acquired Italian apparel brand and manufacturer Raffaele Caruso, US private equity firms acquired Australian lifestyle brand Billabong and Bruno Cuccinelli acquired Italian men’s tailoring company Avenza Fashion. The deal pipeline shows no signs of abating, with Lancel being put up for sale by Richemont and investment suitors being lined up by Versace.

• LVMH’s share price increased by close to 10 percent, driven by reports of excellent sales of the new Capucine leather handbag, a product emblematic of Louis Vuitton’s efforts to reposition itself as more exclusive and upmarket.

• Safilo’s share price gained over 9 percent after a rally early in the month, following the publication of an upbeat research note (Beremberg) highlighting significant opportunities to grow profits at the company.

• Kering’s share price fell by just over 3 percent, driven by concerns over a slowdown of its luxury business, notably Gucci, in China.

• Mulberry’s share price has been very volatile since its second profit warning in June and this month the stock lost almost 3 percent. Elevating the brand profile has hit trading and will take more time to pay off.

The recent flurry of investments in emerging designers has come hand-in-hand with change at big brands (Alexander Wang at Balenciaga, Hedi Slimane at Saint-Laurent not so long ago). It is announced today that Marc Jacobs is leaving Vuitton, and there have been discussions of John Galliano at Oscar de la Renta. Will there now be a period of calm or will the game of musical chairs continue unabated? 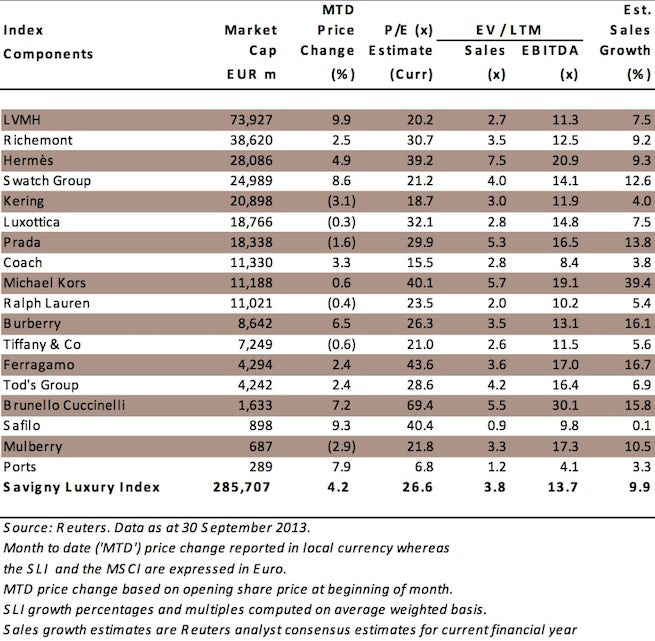