• LVMH’s first quarter results announcement mid-April caused a sell-off in the sector. Its fashion and leather goods division, dominated by Louis Vuitton, posted one of its lowest quarterly sales growths since 2009. A drop in Asian tourists has hit Louis Vuitton sales in Europe, while China has been sluggish. Mr. Arnault announced plans to slow down the brand’s expansion and move its products more upmarket. Kering (formerly PPR), which published disappointing first quarter numbers, echoed its biggest competitor’s remarks about depressed consumption in Europe and a China slowdown.

• Swiss watch exports to China fell by more than 25 percent in the first quarter of 2013. Sales to Hong Kong were down 9.1 percent. Luxury watchmakers expect sales growth of high-end watches to slow this year as a recovery of the US and Middle East demand fail to offset a China slump that seems more deep-rooted than a temporary blip caused by the anti-corruption climate. On the other hand, Swatch still sees double-digit sales growth in China this year for its mid- and entry-price brands.

• Against the trend, Burberry posted forecast-beating fourth quarter results, boosted by its efforts to position the brand more upmarket as well as regained momentum in China.  Hermès also reassured the market by announcing strong first quarter numbers, underpinned by continued high demand in China for its soft goods.

• Coach beat market expectations in its third quarter with a 7 percent sales increase, which included continued growth in its core North American segment and an eye-popping 40 percent same-store sales growth in China. The stock is up almost 15 points.

• Safilo, helped by better operating performance throughout, stabilised balance sheet issues and excellent contribution from its Polaroid brand (acquired last year), has also gained momentum with an increase of over 14 percent over the month.

• Top luxury groups – with the exception of Richemont – all suffered this month following the announcement of their quarterly results, alongside the majority of the SLI components.

• Prada fell by over 8 percent over the month. Although it posted a 45 percent increase in full-year net profit, driven by strong growth in Asia, the result still lagged analysts’ estimates. The group outlined plans to expand in the Middle East and the Americas to offset softer demand in Europe and peaking demand in China.

• Mulberry continues its descent after it issued its second profit warning last month. The stock is down almost 10 points.

The sector may be hitting a turning point. Demand for luxury goods in China seem to be shifting from high-end to mid-segment goods as a result of the economic slowdown and the government’s crackdown on ostentatious gifting.

Luxury brands are moving their focus from China to other markets and are re-discovering the US, which has proven to be a resilient market in the last two years.  It also still holds a lot of untapped growth as it is home to more than a one third of the world’s ultra HNWIs and is benefitting from more tourism from Brazil and Asia as the government shortens the visa application process. 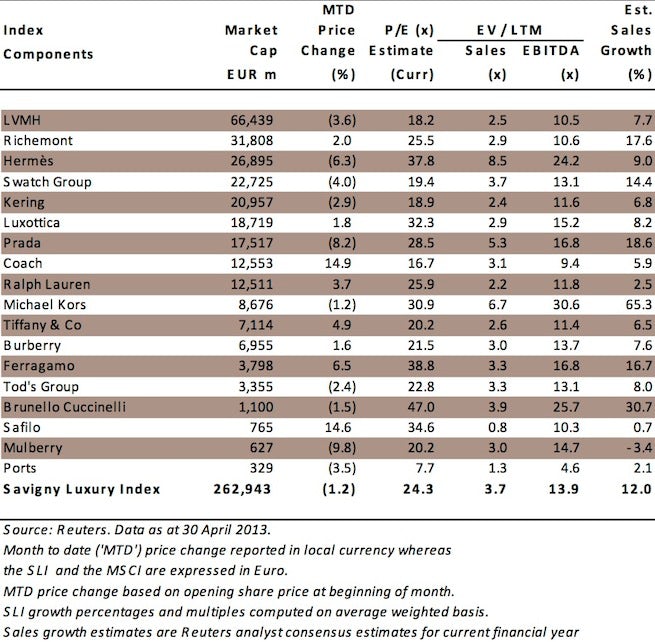