The Savigny Luxury Index fell 2.2 percent over the month, as adverse foreign exchange movements continue to weigh on the luxury sector’s growth.

LONDON, United Kingdom — The Savigny Luxury Index (“SLI”) lost some ground with a 2.2 percent fall over the month as adverse foreign exchange movements continue to weigh on the luxury sector’s growth, whilst the MSCI World Index (“MSCI”) gained 1.6 percent, driven by appealing prospects for the US economy.  The strong Euro is becoming a thorn in the side of many European luxury groups, who are now considering raising their prices overseas to reduce the price gap.

• Prada‘s shock drop in its first quarter sales sent shivers down the whole sector.  The group signalled a possible cut to full-year guidance as sales fell in its main European and Asian markets.  The market had expected a slowdown in growth but not a decline, and Prada’s share price hit a two-year low as a result.  Like many of its peers, Prada’s performance has been hit by unfavourable exchange rates and a tough comparison with the previous year.

• Swatch CEO Nick Hayek lowered his growth forecast for the Swiss watch industry to 5% in 2014 from expected double digits.  Adverse currency movements will cut between CHF 350 and 500 million from Swatch’s full year revenues, with sales in high-end watches being particularly badly hit by the soft dollar and weak emerging markets currencies.

• China’s luxury retail landscape is changing rapidly.  Value Retail, The discount luxury outlet chain that operates the UK’s Bicester Village outlet centre, opened in May a vast development of approximately 100 boutiques in Suzhou, a two-hour drive from Shanghai.  A first in China, the move was generated by demand from the luxury brands themselves to dispose of surplus stock without damaging their brand image.

• Corporate activity is still subdued with just a couple of deals to report: Hong Kong based jewellery group Chow Tai Fook acquired US diamond company Hearts on Fire; and Valentino bought a 40 percent stake in Pescini, a manufacturer of brass components for bags.  Rumours around Cavalli have faded with Investcorp reportedly pulling out of talks to buy a majority stake.

• Most share price increases were modest this month, with the exception of Mulberry. The embattled leather goods group’s share price gained almost 5 percent, fuelled by positive trading prospects in the second half of the year thanks to a return to the affordable positioning that made its success in the past.

• The big loser is, once again, Coach with an additional 16 percent drop.  The group warned of lower sales next year and announced that it would close down 70 stores in North America as it struggles against rivals Kate Spade and Michael Kors.

• Moncler’s share price continued its descent from its peak of almost EUR17 earlier this year as the 180-day lock up period of its three top shareholders drew to a close.  Carlyle ended up selling its 7 percent stake in the business but the two other shareholders (accounting for more than 50 percent of the company) confirmed their commitment to staying on board.  The shares ended nearly 10 percent down on the month.

• Brunello Cucinelli also suffered, its share price losing almost 12 percent due to profit-taking, its EBITDA multiple nevertheless remaining at a 50% premium to the sector average at the end of June.

• Europe continues to be a tough market for luxury goods.  The strength of the Euro against emerging market currencies is hindering sales to travellers.  Furthermore geopolitical tensions over Ukraine are still affecting business in Europe as wealthy Russians have cut down on foreign travel.  Ferragamo CEO Michele Norsa said that stores such as Capri and Monte-Carlo have been impacted. 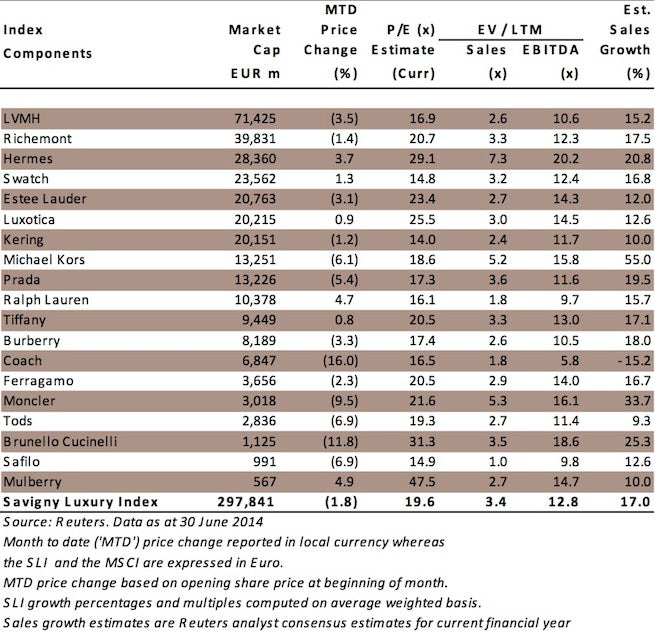