Investors are moving away from bigger groups towards smaller brands and American "affordable luxury." Meanwhile, the jury is still out as to whether the crucial trading period from Thanksgiving to Christmas will deliver strong results, but sentiment remains positive, reports Pierre Mallevays of Savigny Partners.

LONDON, United Kingdom — The Savigny Luxury Index (“SLI”) has gained some ground in November gaining 1.4 percent over the month, roughly in line with the MSCI World Index (“MSCI”). There has been a marked shift of investor interest away from the bigger groups towards some of the smaller brands and towards US "affordable luxury" stocks. The jury is still out as to whether the crucial trading period from Thanksgiving to Christmas will deliver strong results but market sentiment remains positive.

• Overall the big groups have disappointed the market this month, with Kering even issuing a profit warning and Richemont’s 6-month operating results falling short of market expectations. This is in marked contrast to the smaller groups, notably Ferragamo and Cuccinelli, who both announced strong third quarter results with double digit growth in profits.

• US stocks also fared well this month, with sparkling results coming from Tiffany driven by Chinese customers both domestically and in the USA. Both Tiffany and Ralph Lauren raised their full-year sales forecasts on the expectations of strong gains in the holiday quarter. Michael Kors joined the S&P 500 during the month, whilst (contemporary brand) Vince’s share price rose by about 50 percent on its first day of trading, valuing the company at $1 billion.

• Young designers continued to raise the interest of the larger groups. Kering announced it was investing in Bottega Veneta creative director Thomas Meier’s namesake brand, whilst LVMH announced the establishment of the LVMH Young Fashion Designers Prize, the largest of its kind in the sector.

• LVMH, jostling for a bigger share of the premium cosmetics market, opened a €40 million cosmetics research facility in France’s “Cosmetic Valley.” The group’s skincare brands, notably Dior, Guerlain, Givenchy and Fresh, will be supported by a team of 250 researchers.  LVMH also confirmed its interest in acquiring a niche premium skincare brand should one be available; however the group maintained that its focus would remain on organic expansion, with particular emphasis on growing Fresh in Asia.

• The world’s leading luxury group also confirmed the appointment of Nicolas Ghesquière as Creative Director for womenswear at Louis Vuitton, succeeding Marc Jacobs. Ghesquière’s reputation as one of the industry’s most sophisticated designers is very much in line with LVMH’s efforts to steer its star brand towards more exclusivity.

• In an effort to allay fears that creative Director christopher Bailey will be too stretched, Burberry has created a new post of chief design officer, with Bailey officially delegating some of his design duties.

• Corporate activity has been brisk this month with Italy and the jewellery sector being very much in favour. Versace has received six formal offers for a 20 percent stake; the insolvent Italian licensee Ittierre looks like it will be sold to UK-based Turkswood; finally Moncler is going ahead with its IPO and plans to list a third of its capital on the Milan stock exchange next month at a market valuation of between €2.2 and 2.5 billion. Asian-inspired US jeweller John Hardy has attracted bidder interest from a number of private equity firms, keen to gain exposure to the booming jewellery market in Asia. Swatch also increased its stake in its Middle Eastern retail franchisee Rivoli Group.

• Safilo’s share price has rocketed more than 21 percent over the month as its posted its first positive quarter results since it agreed a debt restructuring in 2009.

• Tiffany’s share price gained almost 13 percent in the month as it reported strong growth in all of its markets in its third quarter results and increased its full-year forecast. The company has been reaping the benefits of its expansion in China.

• Kering lost 2.5 percent in its share price in November as it warned that 2013 net income will be significantly lower than expectations, citing the one-off charges related to Puma’s restructuring and the disposal of mail-order business La Redoute.

• Luxottica’s share price was down nearly 3 percent as currency weakness weighed on its results. The group is highly exposed to the US (60 percent of its sales) and the dollar has suffered from the federal budget standoff.

Whilst the US-based luxury groups have been optimistic about trading in the run-up to Christmas, Thanksgiving sales were disappointing with shoppers spending 3 percent less than last year. This crucial period is also six shopping days shorter this year. Nevertheless, Cyber Monday is expected to break the $2 billion mark this year and further details of retailers’ sales performance over Thanksgiving will emerge in the week to come. Market sentiment for the moment remains positive. 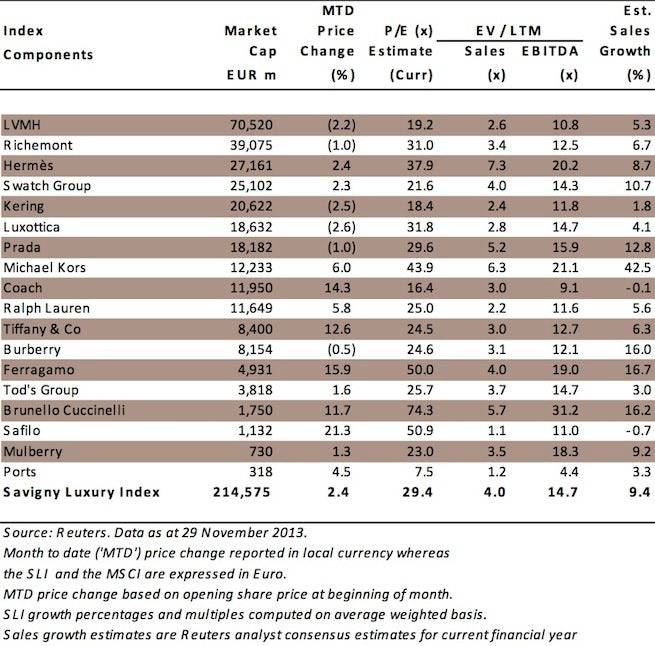