The Savigny Luxury Index continued its upward ascent gaining over two percent this month, driven by positive newsflow and reassured prospects for the Chinese economy.

LONDON, United Kingdom — The Savigny Luxury Index (“SLI”) continued its upward ascent gaining over two percent this month, albeit under performing the MSCI World Index (“MSCI”) by one and a half percentage points, driven by positive newsflow and reassured prospects for the Chinese economy.

• Positive news continues to flow back into the sector.  Richemont published strong full year results and stated that the Chinese watch market had turned a corner.  Ralph Lauren, Salvatore Ferragamo and Estée Lauder all posted better than expected quarterly results, whilst Michael Kors first quarter earnings surged 59 percent, although the company warned of margin pressure as it expands in Europe.

• The luxury goods sector is holding its own despite lingering economic weakness in Europe, a political crisis in Russia and destabilizing exchange rate fluctuations.  As reported by Bain, overall growth for the first quarter of the year has normalised at around 5 percent.  Japan is set to be the main driver for the sector with a projected growth of 9 to 11 percent this year.  Currency devaluations in Russia, Japan, Brazil and Indonesia are altering spending patterns globally, with resulting weaknesses offset by strong projected growth in the US.  Indeed growth in the US is promising, fuelled by an increase in tourism and consumer confidence.  Whilst the Chinese market continues to grow at low single digit rates, its consumers (both domestic and travelling) remain the powerhouse of the sector, accounting for an estimated 30 percent of global luxury sales in 2014.

• Corporate activity this month has been subdued with Italy continuing to be the main focus.  Valentino acquired Pelletterie Sant'Agostino, an Italian bag manufacturer, and rumours continue around Cavalli.

• Tiffany recorded an impressive share price increase of close to 14 percent.  The company raised its full year profit forecast after it reported better-than-expected quarterly results as new collections drove sales in the US, its biggest market.

• Brunello Cuccinelli lost 9 percent over the month after missing the consensus estimate for its first quarter revenues.

• Coach’s share price continued its downward spiral, losing another 9 percent this month.  The brand continues to suffer from competition by Kate Spade and Michael Kors.  Coach is responding to this competition with higher fashion content in its new collections but the jury is still out as to whether this will translate into sales growth.

• Luxury goods companies are looking for new frontiers and many of them are turning to Central and Latin America.  Brazil was once the Latin American frontrunner but it has now been overtaken by Mexico, the region’s second biggest economy.  With a young and booming middle class that spent over $4 billion last year on apparel, accessories and wine, wealth is now spreading into secondary and tertiary cities.  Luxury companies are also looking at investing directly in Venezuela, Chile and Columbia, which would have been unthinkable a few years ago.  Companies offering items at low individual price points like beauty giant Estée Lauder and LVMH’s Sephora are investing heavily and already seeing strong returns. 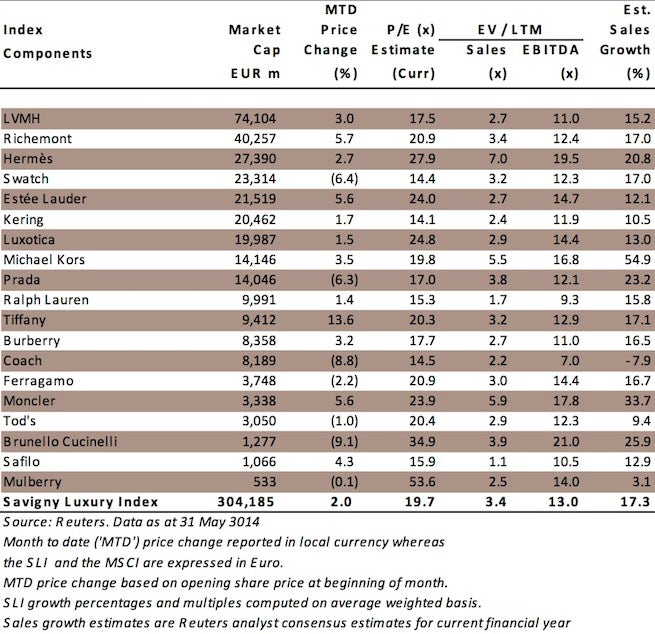