Stormy Trade Talks Take the Wind Out of Luxury’s Sails

The SLI was left reeling with a 4 percent loss as Trump rattled the cage with Europe this month, while family ownership was reaffirmed by some of the industry's leaders.

LONDON, United Kingdom — Family ties run deep in the luxury sector: indeed most of the components of our Savigny Luxury Index (“SLI”) are dominated or controlled by a family, underscoring the long-term nature of the industry. Announcements this month by both LVMH and Prada Group evidencing their family succession plans perfectly illustrate the point.

To much surprise and speculation, Chanel released a full set of financial statements this month for the first time in history, revealing an impressive turnover of close to $10 billion in 2017 and an operating margin of 28 percent.

Kering’s investor day was generally well received, with Gucci’s €10 billion sales target reaffirmed. Ironically, this coincided with a down day for the luxury sector, with Kering and most other SLI constituents seeing their share prices fall, apparently due to some foreign exchange movement.

Prada chief executive Patrizio Bertelli took the opportunity of a factory opening to announce that his elder son Lorenzo had joined the group in a key position, raising the possibility that he is being groomed to take over the company. At LVMH, Antoine Arnault, already chief executive of Berluti and chairman of Loro Piana, was appointed head of communications of the group. He, along with three of his siblings, already holds strategic positions within the LVMH group.

This month saw another round of conscious uncouplings: LVMH and eco-friendly brand Edun announced they were parting ways, while French rival Kering announced that discussions were underway with Christopher Kane about the British designer potentially taking back control of his eponymous brand. After Stella McCartney, this starts to resemble a pattern for Kering, which seems to be increasingly focused on its bigger brands in fashion. What does that mean for McQueen and Altuzarra?

On the investment side, there have been a flurry of deals: Missoni, another family-owned and run business, opened its ownership up to Italian state-backed investment fund FSI for a cash injection of €70 million, in exchange for a 41.5 percent stake. Dries Van Noten sold a majority stake in his eponymous fashion brand to Spanish cosmetics group Puig. Richemont acquired Watchfinder.co.uk, a UK-based online retailer of pre-owned watches. Finally, delays in closing its merger with Essilor did not dampen Luxottica’s deal appetite: this month the group acquired leading optical sun lens manufacturer Barberini.

The SLI fell off its pedestal this month, as Trump’s cold-shouldering of European and Canadian leaders at the G7 summit spooked investors. Our index lost 4.2 percent versus a loss of 0.8 percent in the MSCI. 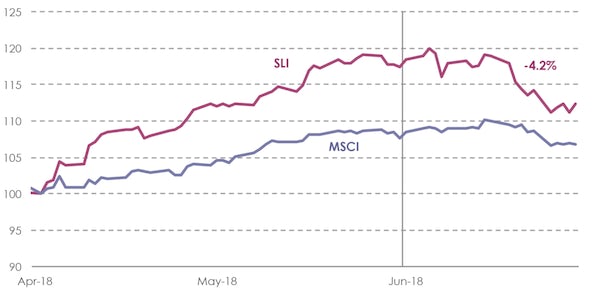 • Michael Kors bounced back after an initial negative reaction to the company’s outlook for 2019 presented in its annual results last month. Since then, estimates have been on the up and the company also held an investor presentation, which must have borne fruit. The stock is up 16 percent this month.

• Brunello Cucinelli continued its unimpeded ascent following the company’s first-quarter sales announcement in May, with the stock ending June 12 percent up.

• Ferragamo’s shares tumbled after the luxury group’s controlling family sold a 3.5 percent stake at a steep discount. The timing rather than scale of the sale spooked investors, with the company being in the middle of a turnaround and without a CEO. The stock ended the month just over 15 percent down.

• Hermès’ entry into the CAC 40, by virtue of the company’s market cap having increased so much (the shares rallied 40 percent from February to end May) seems to have jinxed the stock, which is down 13 percent this month.

• Prada’s share price was hit by turmoil caused by Trump in Europe and in Asia, being one of the few SLI constituents listed in Asia but with headquarters in Europe. The share lost 12 percent in June.

Trade talks, whether between Trump and the rest of the world or the EU and Britain, seem to be going around in circles, if not nowhere. This is particularly concerning for the luxury industry. A global supply chain mixed with a thin but widely spread international distribution network means that any barrier to the movement of goods is going to hit the sector hard. Whether we are witnessing a gargantuan chest-beating exercise by global leaders or the emergence of wide-scale protectionism will determine the outlook for the SLI in months, if not years, to come. 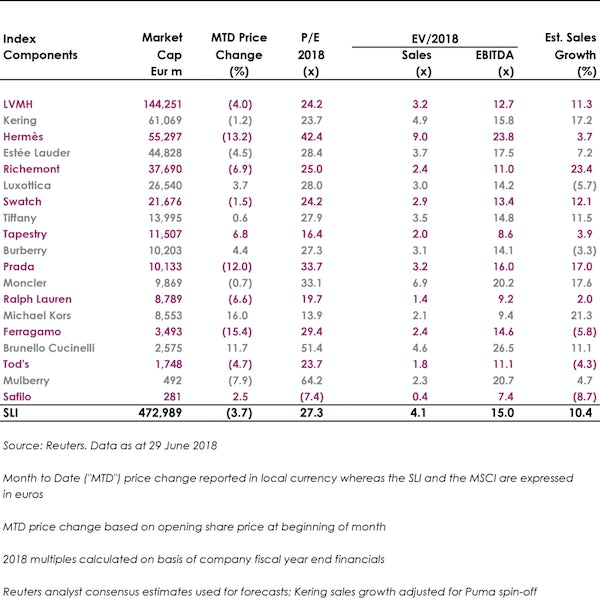 Update: This article was revised at 8pm BST on Friday, July 6, to reflect a wider range of response to Kering’s investor day.