Trump’s controversial and historic tax bill was approved by the Senate in December, prompting a rally in the SLI.

With this year’s Christmas trading looking promising relative to 2016 and the passing of Trump’s controversial tax bill in the USA, a momentary sense of euphoria has gripped luxury investors causing the Savigny Luxury Index (“SLI”) to rise 3 percent this month versus a gain of almost one percent for the MSCI.

December’s critical importance in the luxury sector’s sales performance means that very few companies announce results during this month. Mulberry was the only company in the SLI to post results: the company showed flat performance in its first half, but stated that sales were growing fast in Asia and that additional resources would be directed to this promising market for the affordable luxury brand.

Further evidence of the impact of Brexit on Britain’s luxury landscape came with the loss of its long-standing pole position as champagne consumer. The USA is set to take over as the world’s largest market for champagne, perhaps with an additional boost as the wealthy celebrate paying less tax thanks to Trump?

Phoebe Philo announced her departure from Céline, where she spent the last ten years shaping the brand into one of the luxury sector’s success stories. Massimo Vian was removed from his position as Luxottica’s chief executive, ahead of the company’s merger with Essilor. Majority shareholder Leonardo del Vecchio and deputy Chairman Francesco Milleri will step in as interim co-CEOs.

Ferragamo was the only stock in the SLI to lose ground this month, slipping almost 4 percent as the company announced its recovery would take longer than expected.

Whilst short term share price performances will be impacted by Christmas trading results, to be posted in January, we should keep an eye on currency movements. The euro and pound have notably both strengthened against the dollar at the end of December, resulting in some of the wind being taken out of the sails of the SLI. 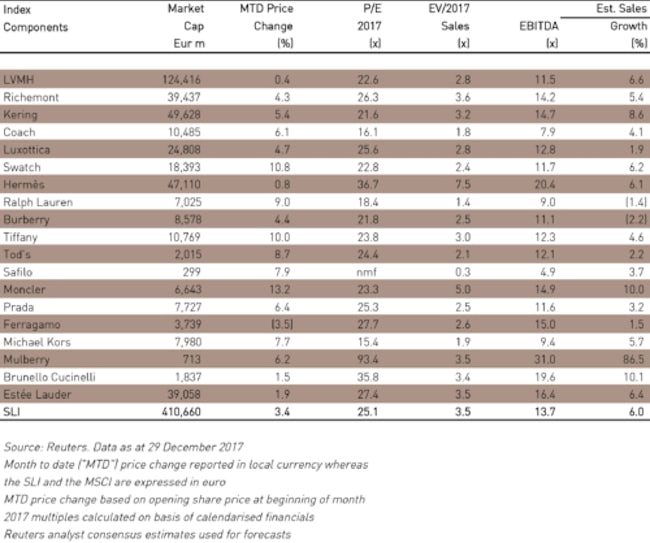