Despite continuing signs of growth and the announcement of landmark deals, the Savigny Luxury Index was flat this month.

LONDON, United Kingdom — Two long-awaited “unicorn” deals shaped corporate activity for luxury this month: Versace, with a price tag of $2 billion, found a long-term strategic partner in Michael Kors while Farfetch ventured onto the stock market with an IPO valuation of $5.8 billion.

Another month and another set of great results, spearheaded by Hermès breaking yet another profitability record in its first half results, with an operating margin of 34.5 percent. The company confirmed that growth momentum was continuing, notably in China. LVMH and Richemont echoed this last sentiment, with Richemont notably announcing double-digit sales growth in the five months to August with particular strength in Asia Pacific and the Americas.

Ethics dominated the headlines this month, with Burberry’s commitment to stop burning unsold stock scoring high marks amongst the ranks of conscious capitalists. Dow Jones has developed a Sustainability Index and awarded pole position this year to Burberry which, in addition to the pledge above, has committed to not using real fur any more, has partnered with sustainable company Elvis & Kresse to turn 120 tonnes of wasted leather offcuts into saleable products and currently sources 48 percent of its total energy needs from sustainable sources. Ethics flag-bearer Stella McCartney announced this month the launch of the world's first vegan Stan Smith trainers made from cruelty-free leather — an environmentally and ethically friendly alternative to the iconic tennis shoe.

London Fashion Week came to the party declaring itself fur-free as no fur was shown on the catwalks or in designer presentations this season. Meanwhile in Umbria, Italian fashion tycoon Brunello Cucinelli unveiled his latest project: the fully restored medieval hamlet of Solomeo, which houses the corporate headquarters of his namesake company. Cucinelli spent 30 years and an undisclosed sum from his personal fortune to refurbish stone buildings, build a theatre and demolish some warehouses to plant a new landscape of olive trees and vines. Brunello Cucinelli SpA employs 1,700 staff worldwide, of which approximately 1,000 live around Solomeo. The restoration is part of Cucinelli’s philosophy of "humanistic capitalism," which involves paying workers above the market average, providing a decent work environment and banning email outside office hours.

The big corporate news items this month are the IPO of Farfetch, which was priced above its target range, and Michael Kors Group confirming its aspirations to becoming a global conglomerate by snatching Versace for a cool $2 billion. Making headlines was also the disclosure that LVMH had acquired control of heritage couture house Jean Patou (established in 1912) and appointed designer Guillaume Henry (ex Nina Ricci and Carven) to revive it. Less trumpeted was news that the name of Patou’s iconic fragrance "Joy" had been hijacked by Dior for it’s latest mega-launch, "Joy" by Dior.

The continuance of trade war threats between the US and China have impacted our Savigny Luxury Index (“SLI”), which edged slightly down this month. The MSCI also posted a flat performance this month, albeit charting a much steadier course than the more volatile SLI.

Swiss watch brand Audemars Piguet announced this month that it intends to fully control the distribution of its luxury watches, cutting out third-party multi-brand retailers, within three to five years. Swiss watch brands are increasingly committed to controlling their distribution network by focusing on mono-brand outlets (either directly owned or operated by franchise partners) and on e-commerce. The wounds of the last downturn are still healing, notably with Richemont having had to fork out €200 million ($229.5 million) earlier this year to buy back unsold inventory from retailers. Taking more control of the retail end will no doubt be costly for the luxury watch industry, but it is something that big luxury players in other categories have done successfully years ago and the only way to maintain price discipline and ultimately brand equity. 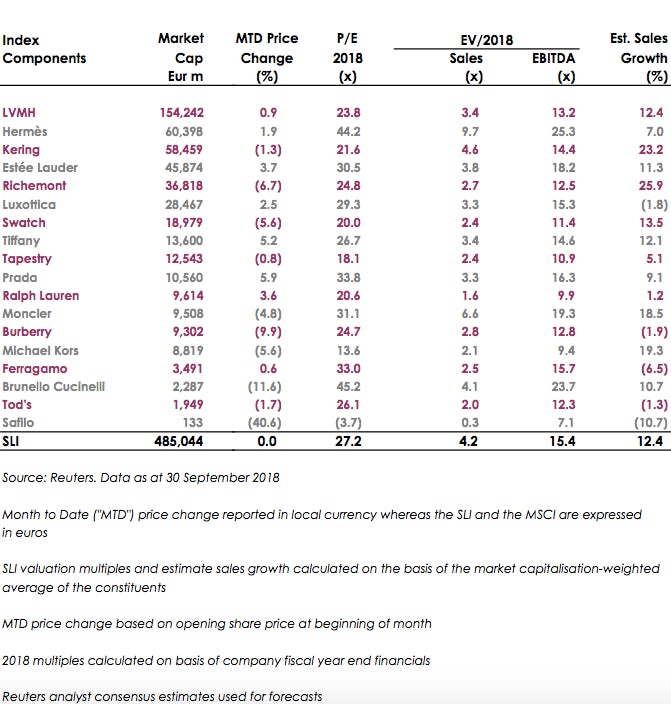