LONDON, United Kingdom — At today’s music festivals, fashion and beauty brands are as omnipresent as floral sundresses and cut-off denim shorts. This weekend, at the 2016 Coachella Valley Music and Arts Festival in Indio, California, ticket-holders will be treated to pop-up shops, branded tents and interactive events hosted by H&M, Tag Heuer and Perverse Sunglasses, alongside performances from the likes of Ellie Goulding and Calvin Harris.

In the US, 33 million people attend music festivals every year. In the UK, the number is about 14 million. What’s more, these events now attract a much wider audience of non-festival goers, who tune in on social media for the celebrity sight-seeing, as the music. (Last year’s Coachella attendees included Kendall Jenner, Gigi Hadid, Rihanna and Justin Bieber.)

“Not everyone has the means to buy the tickets… but a lot of people are interested in the influencers — the clothes they’re wearing, the music they're listening to, what their hair looks like,” says Carol Han, a partner at digital and social media agency CA Creative. “There’s a huge group of people that are paying attention to what’s happening at the festival, even though they’re not physically present.”

“Festivals are huge moments in the cultural calendar,” agrees Deborah Yeh, senior vice president of marketing at Sephora. “[They’ve become] to fashion and beauty brands what the Super Bowl is to other consumer product categories.”

To tap the marketing opportunity presented by festivals, fashion brands are rolling out interactive experiences inside the festival grounds, as well as off-site, digital influencer-driven events, to create content that engages both festival-goers and the audience watching from home.

By officially sponsoring a festival, a brand gets on-the-ground access to the event and its impressive footfall. In 2015, Coachella broke attendance records by selling 198,000 tickets over the course of its two weekends. The previous year, Sephora’s sponsored beauty tent at Coachella, which offered guests free makeup services and phone charging, hosted over 12,000 people over the course of the festival.

However, a name on a tent is no longer enough to engage social-media savvy festival crowds. Three-quarters of UK millennials go to at least one festival every year, according to research firm JWT Intelligence. In the US, 46 percent of festival attendees in 2015 were aged 18 to 34, reports Nielsen Music. This demographic has grown up prioritising experiences that they can share online over physical stuff. According to a 2015 study by Harris Poll and Eventbrite, 78 percent of millennials would rather pay for an experience than for material goods. For them, “Sharing is critical — it’s the currency of cool. If it didn’t appear on my Instagram feed, it didn’t exist,” explains Jeff Fromm, president of the Future Cast, a millennial marketing firm.

This year at Coachella, Tag Heuer — the official watch of the festival — is hosting a tented lounge in the festival’s VIP area, where guests can buy the brand’s new Connect Watch while sipping refreshments. However, “The main purpose to go there is not to sell watches,” says Jean-Claude Biver, chief executive officer of Tag Heuer. Rather, he says, the aim is “to talk and to gather with our new customer.”

“The new generation spend half of their time sharing,” Biver adds. If a brand’s festival experience doesn’t integrate social media, he says, “these people will miss something.” With that in mind, the Tag Heuer tent will house a photo booth, where guests can take pictures to immediately upload to social media.

Likewise, H&M, which is sponsoring Coachella for the seventh year in a row, is complementing its on-site pop up shop (which will sell the retailer’s official H&M Loves Coachella collection) with a more “shareable” experience. The H&M Desert Vibes installation will feature a 360-degree desert scene backdrop — complete with lighting effects and wind machines — where guests can film instantly-Instagrammable video clips.

A strong digital content strategy can be the difference between “not only reaching the thousands of people who came to the event, but also the hundreds of thousands of people who follow the people who came to the event,” says Jaclyn Johnson, chief executive at digital marketing and events agency No Subject, which has worked with clients including Urban Decay on music festival strategy. “Now, the ROI on events is not just who attended or how many eyeballs were on the product, but what online content was driven,” she adds.

But not all is won on-site. Inside the festival gates, it can be difficult for brands to cut through the noise of the dozens of other sponsored events and experiences. And according to William Chipps, senior editor at IEG, a sponsorship intelligence firm, on-site brand partnerships “easily begin in the six figures in US dollars.” 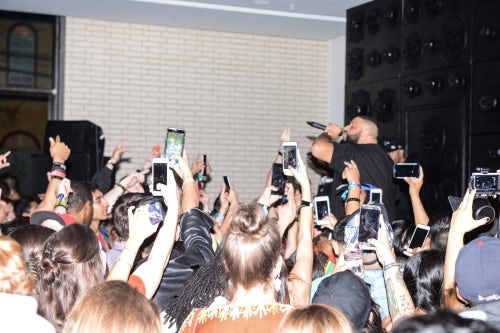 As a result, some brands are opting to host off-site, unaffiliated events near to the festival, for a fraction of the cost. These pool parties or hangover-cure breakfasts serve the same purpose as on-site activations: brands invite (and often hire) models, musicians and bloggers to attend, to generate digital content and engage consumers following the festival online.

“We want to deliver intimacy to our audience that can’t come to the festival,” says Melisa Goldie, chief marketing officer of Calvin Klein, which is hosting about 25 digital influencers at a hotel in Palm Springs as part of a three-day “branded experience” to coincide with Coachella. Earlier this year, during South By Southwest, Calvin Klein and Urban Outfitters co-hosted a party near to the festival, at Austin’sSpace24Twenty shopping centre and the South Congress Hotel. The event racked up over one million engagements on Instagram and Twitter in less than 24 hours.

Another alternative to on-site events is to sponsor the festival wardrobe of a high-profile attendee. “Brands can really pick an influencer that resonates with their brand identity and their aesthetic,” says CA Creative’s Han, who says these partnerships often include contractual social media obligations on the part of the influencer. By partnering with a specific brand ambassador, “You can have a better lead on exactly how successful it will be and how many people it will reach… If you open a tent in the middle of a festival, it’s less controlled,” she says.

Other fashion companies take a product-focussed approach. Brands such as H&M and Hunter have launched festival-themed collections, tapping the festival “look” of flower crowns and flowing vintage dresses. “It’s become its own sub-category within fashion and beauty,” Johnson says. Brands can “create an experience around the moment where you’re purchasing items for a specific event,” she adds.

This week, Alice + Olivia launched a Grateful Dead-inspired capsule collection, just in time for Coachella. Stacey Bendet, chief executive officer and creative director of Alice + Olivia, says she was reluctant to hold a runway event on-site, as finding the staff and models outside of major cities was a challenge, as was “the competing events and how many things are all happening at once there.”

Not all festival-goers are receptive to branded experiences, she adds: “Some people are actually there to hear the music!”

Indeed, over the past couple of years, a small but vocal backlash has emerged, decrying the commercialisation of festivals. The hashtag #Nochella has been used on Instagram nearly 22,000 times, including by high-profile attendees Vanessa Hudgens and Demi Lovato. “These festivals have strayed a little bit from what they’ve started out as,” concedes Han. “But I think that’s something that can be said for any entity that grows in size.”

In response, some brands are focusing their marketing efforts away from blockbuster events like Glastonbury or Coachella. After two years at Coachella, this year, Sephora will sponsor Panorama, a music, arts and technology festival in New York, instead.

According to Han, brands must select a festival that fits their product and consumer. “I wouldn’t say that working on a campaign for Coachella would be appropriate for a brand like Tiffany,” she says. However, “if the music festival vibe is something that’s really aligned with who the brand is, it would be a great step.”