ROME, Italy — In March, when Italian luxury menswear house Brioni announced the appointment of its new creative director Justin O’Shea — the tattooed, Australian former fashion director of MyTheresa, whose natty, camera-ready dress sense and humour have made him a street style and social media star — it seemed an unconventional choice.

For one, O’Shea has no formal training or experience as a designer. Yet the decision reflected the changing role of creative directors at some top luxury brands, with less emphasis on designing clothes in the traditional sense and more about crafting and communicating a strong point-of-view across a number of channels, from public appearances to advertising campaigns.

Today, ahead of O’Shea’s first show for Brioni, to be staged on July 4 during Paris couture week, BoF can exclusively reveal the creative director’s first advertising campaign for the brand, starring world-famous heavy metal band Metallica, photographed by Zackery Michael and art directed by O’Shea. The campaign is likely to create ripples throughout the luxury industry for completely ditching the previous Brioni identity, with it's elegant red scripted logo and minimalist art direction.

Shot in black-and-white and referencing the cover of Queen’s “Bohemian Rhapsody” album, the new Brioni campaign features two portraits of Metallica members James Hetfield, Lars Ulrich, Kirk Hammett and Robert Trujillo as a group — one in black tuxedoes, one in white tuxedoes — overlaid with the word “Brioni” in a large, gothic font, a new interpretation of the house's first official logo, which it used from 1955 until the 1980s.

In addition, individual portraits show the four band members wearing a new Brioni suit style called the Continental, which features wider shoulders, a narrow waist, a longer body and a more structured silhouette — one better suited to larger frames, not unlike that of O'Shea himself — than the slim-cut suits of, say, Saint Laurent. The band members also wear sunglasses, a category that’s set to be a bigger focus for the business going forward.

The unlikely pairing of heavy metal and classic Italian tailoring, along with the ad’s art direction, will likely be polarising. But critically, the campaign signals just how far O’Shea’s repositioning of Brioni will go and the more rugged, masculine tone it will take. At a time when many luxury menswear collections are becoming more feminine, Brioni, which was founded in 1945 and is best known for outfitting actors like Richard Burton and Matthew McConaughey, is cutting the other way.

At a time when many luxury menswear collections are becoming more feminine, Brioni is cutting the other way.

In some ways, it reflects O’Shea’s buyer’s eye. From 2009 to 2016, he moved up the buying function at MyTheresa, eventually becoming global buying director and, before that, was a buyer for Al Ostoura, a luxury retailer in Kuwait. And while much has been made of gender fluidity, most male luxury consumers still identify with a more traditional and gendered sense of dressing. 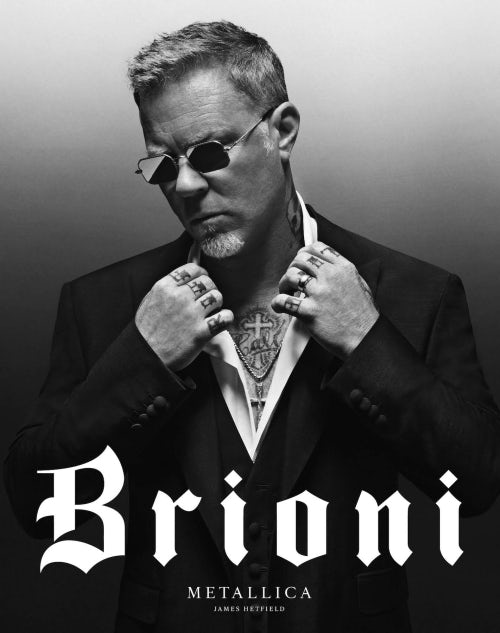 The campaign unveiled exclusively on BoF today, will also be distributed on social media channels and will appear on billboards and kiosks in Paris and in The New York Times, reflecting a more focused initial print advertising buy. Wider print distribution and billboards in New York, Los Angeles and Moscow will follow in the autumn.

O’Shea’s revamp of Brioni is also structural. As well as moving this season’s Autumn/Winter show from Milan men’s week to the women’s couture schedule in Paris, Brioni’s next show will be in New York in November, timed to coincide with the opening of a renovated store, but outside of the traditional fashion week schedule. The brand will also combine its pre-collections and mainline collections to create two selling seasons instead of the current four and will deliver collections weeks after the runway events, in part to quickly replace old stock with O’Shea’s new vision.

Since Kering (then PPR) acquired Brioni in 2012, former creative director Brendan Mullane added younger styles to its offering, such as parkas and sneakers. Whether O’Shea will continue this with his collections remains to be seen.

Last year, Brioni’s performance was weighed down by weak demand in Eastern Europe and the Middle East, according to Kering. At the end of 2015, Brioni had 46 directly-operated retail stores. According to a report in The New York Times, the company has annual revenues of about €180 million (about $206 million).