MILAN, Italy — Over the next few weeks, Prada will begin the roll-out of its new public identity. Described by art director David James as “a continuous visual data stream,” Prada365 is an ambitious multi-platform endeavour that embraces everything from print media to the entire warp and woof of the internet, from magazine ad to Instagram post.

As its name suggests, it could very well end up as an all-Prada-all-the-time proposition, which would be the first time a fashion business of Prada’s global reach has been able to fully exploit its own massive product offering at the same time, as it lets it tell so many more stories than the ones currently on view in the monolithic campaigns it runs each season. That is, of course, the way the company and its competitors have conventionally operated when it comes to advertising, but Prada365 promises something nimble, timely, immediate, proactive. And – need I say it again? — new.

Miuccia Prada walks into our interview in Milan wearing a coat from the spring collection, extravagantly trimmed in marabou. It’s exactly the sort of distinctive piece that Steven Meisel, Prada’s advertising lensman for the last two decades, would shoot for a campaign that we would then become overly familiar with for what would sometimes feels like the rest of the year. 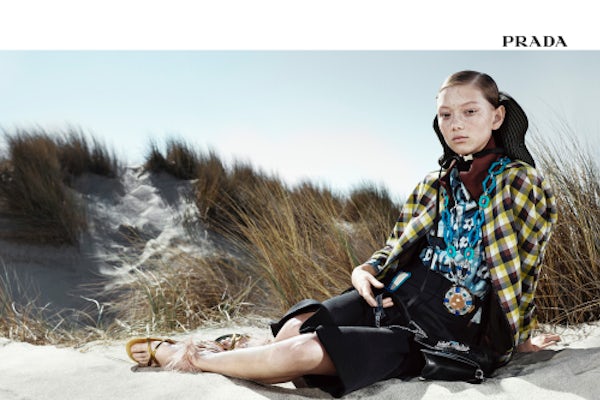 “We always did amazing campaigns, but very often nowadays looking at one campaign, one point of view through the whole season, we got bored of ourselves very easily,” says Fabio Zambernardi, design director of the Prada and Miu Miu collections since 2002. “We wanted to try how that could be different. Why don’t we just do smaller concepts, faster, more immediate, showing different women? We always show so many different types of women anyway, and Miuccia liked the idea of appealing to different points of view.”

“365?” Prada feels she’s seen those digits attached to so many other things, from banks to football teams. “It’s such a common title,” she worries. But 365 as it relates to Prada’s new pitch spins another way: Prada360, Prada in the round, print, digital, movies, billboards, an ever-rotating visual identity that entertains, illuminates, entices. “We always had to reduce, reduce, reduce which was a pity,” Prada says. “This gives more possibilities of ideas.”

If you have genius ideas, you have to make them attractive. Otherwise no one listens.

And David James has already art-directed a season of them: high fashion vignettes featuring redhead of the moment Kiki Willems in outfits rich with marabou; Saskia de Brauw, Hitchcock-haunted in an anonymous corridor, accessories emphasised; a parkour-like rooftop scenario that reflects the backpack’n’Teva energy of the Spring/Summer 2017 menswear show; an elegant monochrome portfolio with Jude Law, languid in sand dunes, looking like a 21st century Gary Cooper. “In a way, you tend to forget that this is all the same season,” says Zambernardi. The diversity is startling, seductive, even more so when you realise that it’s been captured by the same photographer, Willy Vanderperre.

That’s hardly a new notion for Prada. Meisel has been photographing its campaigns since at least 1992. “For so many years, Steven was the only photographer who could understand the quick changes of the Prada woman,” says Zambernardi. “It was almost like going to a different photographer every season. We would explain the fantasy, and he would find the images. And he would push the women to the limit of almost not being real… of being hyperreal.” 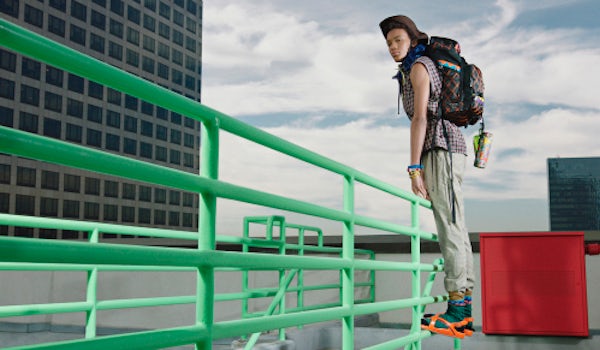 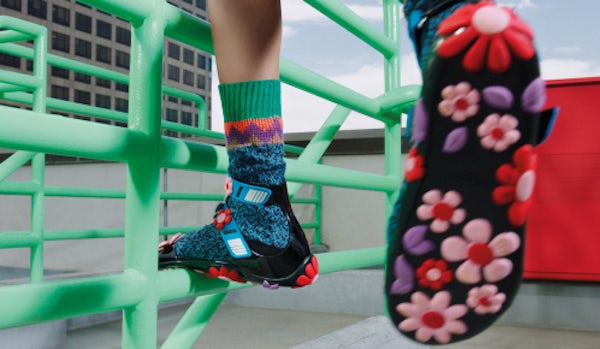 Meisel’s chameleon genius has helped vindicate the equally genius waywardness of Miuccia Prada’s fashion vision over the years. No surprise when she says she’s taken some internal flak for it. “Sometimes I’ve been criticised by the company. They said, ‘Valentino is Valentino, Hermès is Hermès. Clear, simple, one idea.’ So I said, ‘Change the designer then.'”

But here, it’s the photographer who’s changing, in the interests of a more collaborative, more spontaneous, more live approach. “It’s very important for Miuccia and me to be able to transfer ideas immediately,” says Zambernardi. “If Willy’s here, she can can say something to him.”

And that is one of the major shifts in perception behind Prada365. Miuccia Prada finds herself less engaged by the theoretical, the postmodern, the hyperreal than before. When I suggest to her that such a change in attitude is inevitable with the passage of time, she agrees that ageing brings an interest in “human things.” Less theory, more passion for life. “What I thought was interesting was history,” she muses. “But after years of a big theoretical reflection on mankind, I realised what was important was to come back to now, to reality.” She claims the same appetite for immediacy is re-shaping her attitude to her art foundation. 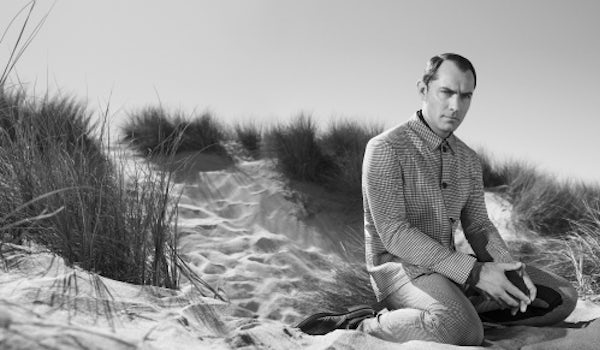 What Prada sees as her own particular professional challenge is typically provoking: how to be superficial and serious. In a culture driven by “likes,” she appreciates that it’s vital to catch the attention quickly. “If you have genius ideas, you have to make them attractive,” she says. “Otherwise no one listens. In my job, it’s the same. But at some point, you have to go deep. So the superficial image reflects something more complex.”

That duality is something Prada, both the woman and the business she figureheads, has always excelled at, so it’s something of a surprise to hear her concede insecurity about where she sits in the equation. “I realise that, in all my relationships in other fields, they like Prada for what we did, but also because we are still relevant. And I worry that my job is the instrument that makes relevance.”

We really have to try to understand how to use this new tool, how it could develop.

Which casts an intriguing light on Prada’s noticeably vigorous re-engagement with her job over the past few seasons. She’s clearly over what felt like a creative slump, where it looked — to these eyes at least — like her attention had drifted elsewhere. But even when a Prada collection was less-than, she was always able to weight it with her restless intelligence, intuition and acute sense of irony. They’ve always been the business’s USPs. So one of the elements that makes Prada365 so intriguing is the notion that its fountainhead may be undergoing a major change of heart (or head).

“I never wanted to feel so involved in my job,” Prada reflects. “At the beginning, I wanted to keep a distance. I didn’t like the idea of being political. I didn’t like the idea of clothes. But the more I realised how important and relevant fashion could be, the less critical I was. Distance was less important. If you’re approaching more and more people — different mentalities, different religions, different cultures — you have to put more of yourself out there.” 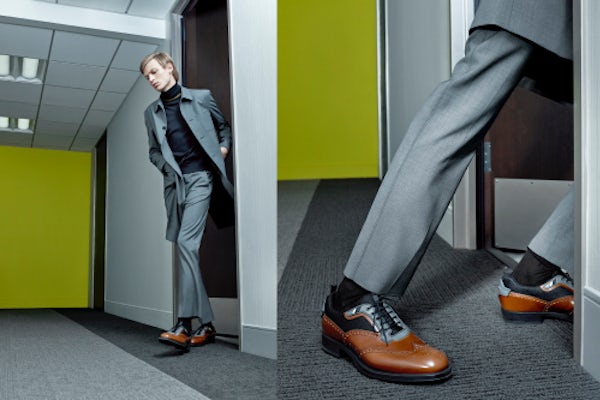 What emerges from the first wave of visuals for Spring 2017 is a commitment to those differences, and to the various characters that embody them. Past Forward, Prada’s recent experiment with director David O. Russell was something of an appetiser. She admits she was initially terrified by the challenge of reconciling two such distinctive visions and creative processes. “But his film was very human,” she adds. “It reflected the same subjects we’re interested in — our humanity, our moment now.”

The way that Russell’s 14-minute film interweaves and overlays the stories of five different women takes simultaneity to the brink of surreality. We should see a similar hypnotic momentum evolving in Prada365 if it evolves as organically as the initial concept suggests it could, with the global flexibility to cater to macro (different hemispheres, regional appetites) and micro (specific stores, magazine vs. newspaper advertising).

In these early days, that is quite a big “if.” The enormity of the challenges the company faces with such an ambitious re-positioning is enough to make Prada and Zambernardi dissolve into helpless laughter.

The processes didn’t make sense anymore. There was sameness everywhere.

“We really have to try to understand how to use this new tool, how it could develop,” she says. Communication, inside and outside the company, is clearly critical. And the concept demands commitment because it will take time to reveal its potential scope. Which raises another issue: that drifting attention span. Apparently, Prada is notorious internally for moving on to the next thing that engages her interest. She poses the question she imagines others posing to her: “What if after six months you’ve had enough?” She laughs again. Maybe it’ll be different this time. She knows she has to take a longer run at this idea. “You put more energy into it because you want to make it work.”

And she knows she needs to make it work, because something had to change at Prada. “The processes didn’t make sense anymore,” she acknowledges. “There was sameness everywhere. Now we’ve started cleaning, going back to the origin, pulling back to re-focus on differences, with a more sophisticated attention to different places. The mountain is not the seaside.” What she means is that you should be able to walk into the new Prada store in St Barts without feeling like you could just as well be in San Francisco or St Moritz.

That was the old way of going global. Once upon a time, the fashion industry was much more basic. “It was easy to be Christian Dior or Coco Chanel because it was all rich people, Europeans, Americans,” Prada muses. “Now our job is much more difficult because we have tons of societies, of religions, of different people. And sometimes you don’t know how to do it. But now we have to do it more, and do it better, and get people used to it.”

And so a new year signs in with Prada365 and the future, however uncertain, at least looks exciting.